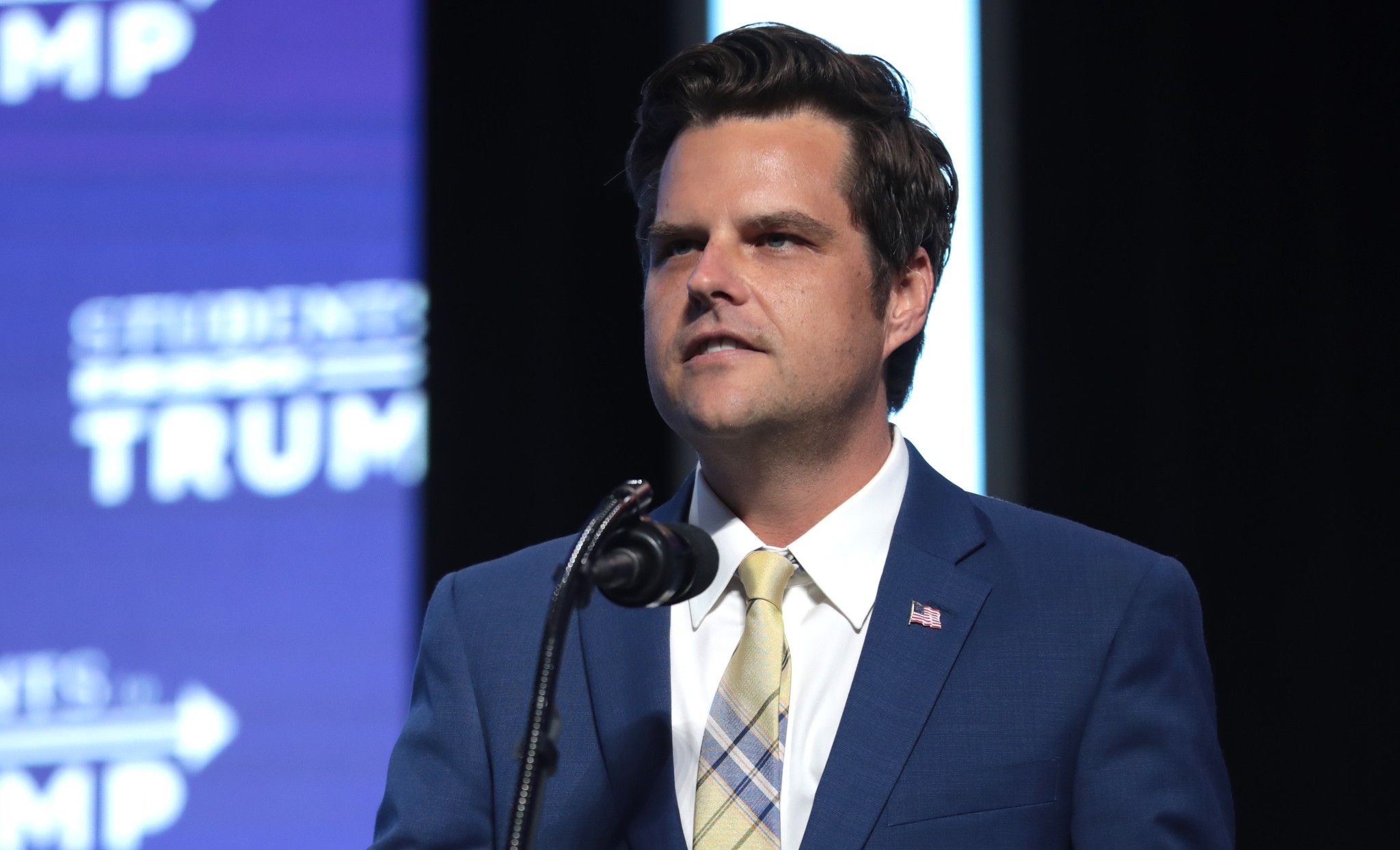 The House passed a bill Wednesday by 401–20 to reauthorize for a sixth time a law aimed at combatting sex trafficking. All those who voted against the bill are Republicans, one of whom is Rep. Matt Gaetz of Florida.

Gaetz remains under federal investigation for allegations that he sex-trafficked a minor and committed statutory rape against her. He denies the allegations, calling them “debunked conspiracies.” That raises the question: Why would Gaetz make such a contrarian vote on sex trafficking when allegations that he did just that have hung over his head since the New York Times first reported the ongoing investigation in March 2021?

Such a vote was certain to cause head-scratching. Did the congressman want to demonstrate that the allegations do not affect him? Did he genuinely disagree with the substance of the bill? Did he want to (as he often does) troll the Left? (His entire persona seems aimed at being a “firebrand” who proudly offends the Left.)

In the aftermath of the vote, the mainstream media gave extensive coverage to Gaetz’s “no,” noting the unpropitious appearance of voting to decrease federal resources to combat sex trafficking while accused of being a sex trafficker. Business Insider headlined its coverage “Matt Gaetz, under investigation for possible sex trafficking, was among 20 Republicans to vote against reauthorizing a sex-trafficking law.” An article published by MSNBC said, “Raise your hand if you’ve been accused of sex trafficking and voted — repeatedly — against a law protecting sex trafficking victims. That’s right — who else but GOP Rep. Matt Gaetz of Florida?”

Gaetz indeed has a record of leaving the Republican fold to vote against widely supported anti-sex-trafficking bills. In 2017, he was the only member of the House to vote against the Combating Human Trafficking in Commercial Vehicles Act, which Gaetz said was motivated by his small-government principles. In 2018, he was one of two dozen lawmakers to vote against the Stop Enabling Sex Traffickers Act.

Yet while Gaetz was in the Florida Legislature, he sponsored legislation in 2012 to make it easier for law enforcement to prosecute sex trafficking and prostitution. Gaetz has often noted that record when defending his votes against anti-trafficking bills at the federal level.

Gaetz has not yet publicly said why he voted against the anti-trafficking bill. But his spokesman, Joel Valdez, told USA Today on Thursday that Gaetz had a problem with the bill because it did not “accurately and specifically define human trafficking” and had a high cost.

Valdez said that the lack of a specific definition for human trafficking allowed the legislation “to act as a backdoor loophole for illegal immigration and amnesty.”

Rep. Chip Roy, the only member of Congress who voted against the bill to speak at the debate, said that “other factors at play involving the floor and spending and other stuff” spurred him to take his position. He spoke on how devastating trafficking is to children and also said, “I need to review the bill.”

Other congressmen who voted against the bill include Rep. Andy Biggs of Arizona, Rep. Marjorie Taylor Greene of Georgia, Rep. Andy Harris of Maryland, and Rep. Thomas Massie of Kentucky, all of whom have been labeled as belonging to the House’s so-called “‘no’ caucus.” These representatives and Gaetz voted against condemning the military takeover in Burma as well as awarding the Congressional Gold Medal to those who protected the Capitol on Jan. 6, both of which had high levels of bipartisan support.

“It’s not immediately clear what unifies the Republicans who opposed the measures besides staunchly right-wing politics and, in many cases, a penchant for media attention,” wrote the Washington Post.

Check out our new campaign spot and help us fight back! https://t.co/MyqMPrqjkM pic.twitter.com/Ny5A5O8kf6

Gaetz’s “no” vote came the same week that the sex-trafficking investigation again became headline news after the former chief of staff to former Vice President Mike Pence, Marc Short, said Monday on CNN that it is more likely that Gaetz will be in prison for child sex trafficking in 2024 than voting in the election.

“Well, I don’t know if Mike Pence will run for president in 2024, but I don’t think Matt Gaetz will have an impact on that,” Short said. “In fact, I’d be surprised if he was still voting. It’s more likely he’ll be in prison for child sex trafficking by 2024, and I’m actually surprised that Florida law enforcement still allows him to speak to teenage conferences like that.”

That was a reaction to Gaetz’s statement over the weekend at Turning Point USA’s student conference that “Mike Pence will never be president” since “[o]ur America is proudly ultra-MAGA.”

Marc Short, top aide to Mike Pence, stating rather matter of factly that Matt Gaetz will likely be in prison for child sex trafficking by 2024 and, really, why is Florida law enforcement allowing him to speak at events where there are young people.

Despite the allegations against him, Gaetz has not lost his committee assignments. At the time the sex-trafficking investigation became public, House Minority Leader Kevin McCarthy said: “Matt Gaetz says that it’s not true, and we don’t have any information. So let’s get all the information.” He noted that Gaetz would be stripped of his assignments if the allegation “comes out to be true.”

Gaetz is accused of paying a 17-year-old girl to travel across state lines and committing statutory rape against her. His ex-friend, Joel Greenberg, pleaded guilty to sex trafficking the same girl and introducing her to “adult men” who had sex with her while she was underage. Greenberg is cooperating with the authorities as part of a wider investigation in a bid to decrease his sentence. He wrote in a confession letter in late 2020 that he and Gaetz had sex with the 17-year-old girl and paid women for sex.

He added, in reference to the 17-year-old, “On more than one occasion, this individual was involved in sexual activities with several of the other girls, the congressman from Florida’s 1st Congressional District and myself.”

The Daily Beast reported that it viewed multiple Venmo payments Gaetz made to Greenberg which were subsequently sent within hours to young women with labels including “Ass,” “Stuff,” and “School.” The outlet reported that Gaetz sent Greenberg $900 while stating, “Hit up ___,” in reference to the girl, who had since turned 18. The Washington Post reported that at least one of those payments has been confirmed by the federal investigation. Twelve women who received Venmo payments from Greenberg told the Daily Beast they understood the money was at least in part for sex.

The New York Times reported that investigators have found evidence indicating that Gaetz used websites where men set up dates with women in exchange for meals and hotel stays. The investigators suspect Greenberg “procured a number of women for Gaetz,” the Washington Post said. ABC News reported on alleged Google Voice text messages from September 2018 that show Greenberg discussing payment options with a woman and arranging for her to meet up with himself, Gaetz, and one of the woman’s friends. Greenberg, ABC News said, is cooperating with the investigation of Gaetz and has provided investigators with records of Venmo and CashApp transactions.

Greenberg communicated with former Trump campaign adviser Roger Stone in December 2020 in an effort to secure pardons for both himself and Gaetz. In text messages to Stone first reported by the Daily Beast, he wrote: “My lawyers that I fired, know the whole story about MG’s involvement. They know he paid me to pay the girls and that he and I both had sex with the girl who was underage.”

A grand jury has been convened in the investigation against Gaetz, which began with the approval of then-Attorney General Bill Barr. An investigation by the House Ethics Committee is also ongoing.

Some conservatives have announced their support for Gaetz and belief in his innocence, including Rep. Jim Jordan, who is a ranking member of the House Judiciary Committee. Jordan said: “I believe Matt Gaetz. He should not be removed from the Judiciary Committee.” Greene also pledged her support, saying, “Take it from me rumors and headlines don’t equal truth.”