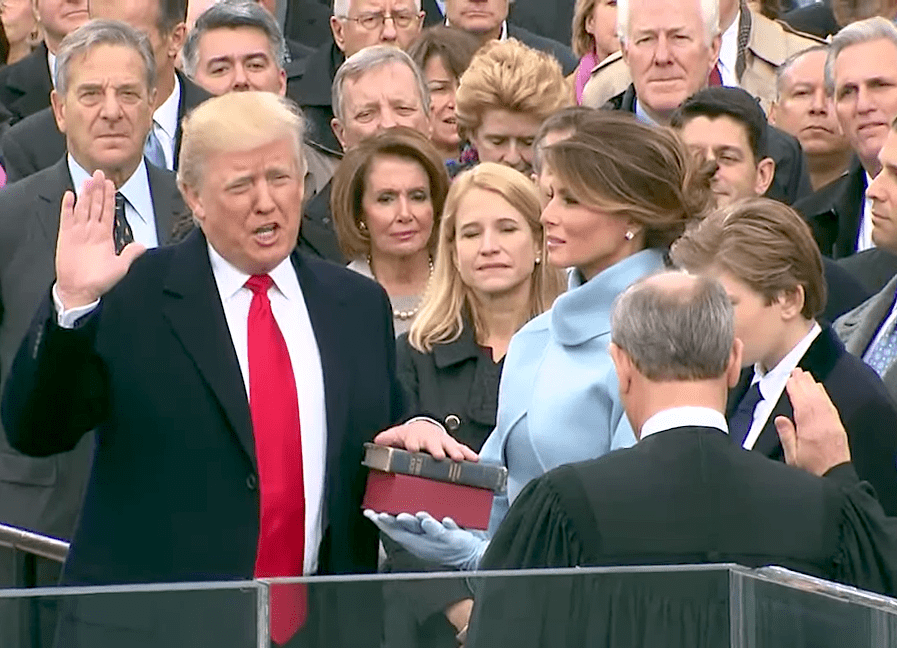 “We do not have Obama judges or Trump judges, Bush judges or Clinton judges,” U.S. Supreme Court Chief Justice John Roberts lectured the president this week in a prepared statement. “What we have is an extraordinary group of dedicated judges doing their level best to do equal right to those appearing before them. That independent judiciary is something we should all be thankful for.”

The rebuke came in response to the president dismissing the ruling of an “Obama judge” on the Trump administration’s immigration policies.

“Sorry Chief Justice John Roberts, but you do indeed have ‘Obama judges,’ and they have a much different point of view than the people who are charged with the safety of our country,” Trump fired back. “It would be great if the 9th Circuit was indeed an ‘independent judiciary,’ but if it is why are so many opposing view (on Border and Safety) cases filed there, and why are a vast number of those cases overturned. Please study the numbers, they are shocking. We need protection and security—these rulings are making our country unsafe! Very dangerous and unwise!”

In lecturing the president as though he had transgressed norms, John Roberts violated one. The unusual aspect of the exchange involved a member of the court delving into politics. Presidents, long before Trump, criticized, attacked, and even questioned the court possessing the right to deem acts by the legislative and executive branches unconstitutional.

Andrew Jackson, upset over the Supreme Court’s ruling in Worcester v. Georgia, responded that “the decision of the Supreme Court has fell still born, and they find that they cannot coerce Georgia to yield to its mandate,” which somehow morphed into “John Marshall has made his decision; now let him enforce it!”

“I could carve out of a banana a judge with more backbone than that,” Theodore Roosevelt said of Oliver Wendell Holmes — his own appointee.

When Coolidge, Harding, and Hoover judges threatened Franklin Roosevelt’s New Deal, the president unwisely attempted to stack the Supreme Court by creating new seats when he could not fill vacancies. “A part of the problem of obtaining a sufficient number of judges to dispose of cases is the capacity of the judges themselves,” the president, himself vulnerable to such a charge due to his ailments, contended. “This brings forward the question of aged or infirm judges — a subject of delicacy and yet one which requires frank discussion.”

Dwight Eisenhower famously regarded his appointment of Earl Warren as chief justice, “The biggest damn fool mistake I ever made.”

President Obama used the members of the Supreme Court present at his 2010 State of the Union Address as props in dressing them down over the Citizens United decision. “Last week the Supreme Court reversed a century of law that I believe will open the floodgates for special interests, including foreign corporations, to spend without limit in our elections,” Obama claimed (falsely, it turns out, regarding foreign corporations). “Well, I don’t think American elections should be bankrolled by America’s most powerful interests, and worse, by foreign entities.”

A chief justice weighing in on political matters through a prepared statement seems as the extraordinary part of all this. In injecting himself into the rough-and-tumble of Washington, Roberts validates Trump’s criticism. Defending the judicial branch as detached from politics in such a political manner seems self-refuting.

Trump finds himself in good company in criticizing rulings from the federal bench. One president went further — and did so by criticizing John Marshall, a man who served longer in John Roberts’s position than any other.

“To consider the judges as the ultimate arbiters of all constitutional questions [is] a very dangerous doctrine indeed, and one which would place us under the despotism of an oligarchy,” Thomas Jefferson, coming out on the wrong side of Marbury v. Madison, reflected after his presidency. “Our judges are as honest as other men and not more so. They have with others the same passions for party, for power, and the privilege of their corps.”

Whether Jefferson would agree with Chief Justice Roberts that there’s no such thing as “Obama judges” or “Trump judges” seems the stuff of counterfactual historians. Actual historians tell us that he certainly believed in such a thing as “Federalist” judges.