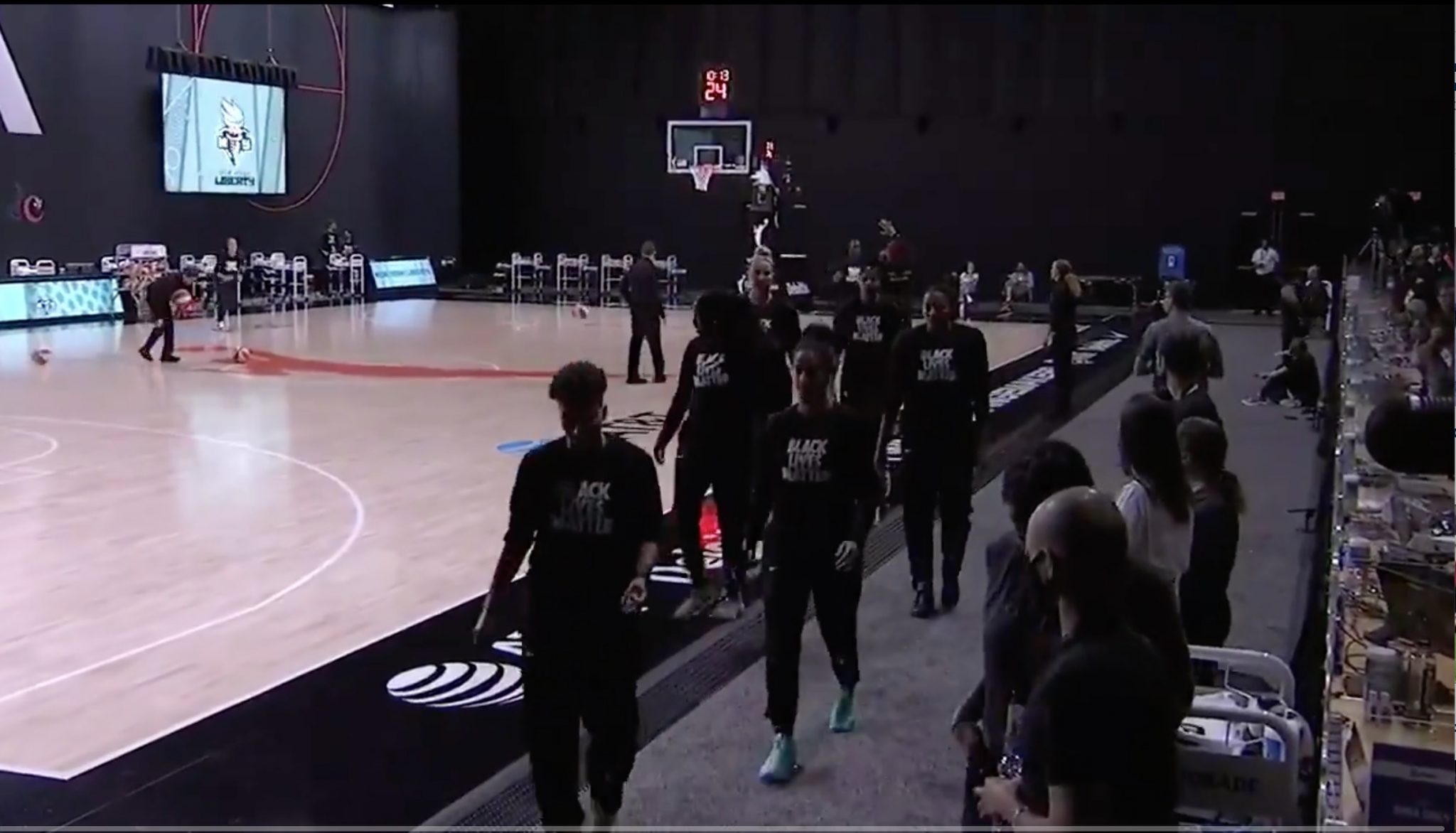 Professional sports teams these days are not only competing with each other on the field or court, but also in who can come up with the most outrageous anti-American gestures. Clearly pro athletes, young players who know little of the world, and sports executives old enough to know better hate the country that has made them wealthy and privileged. They want you to hate it too.

Word has reached me that two WNBA teams, the New York Liberty and the Seattle Storm, walked off the court when the national anthem was played before their Saturday season opener. Very dramatic. I’ll see your kneeling and raise you walking off the court.

Despicable behavior, but as it was a WNBA game, there were precious few people tuned in. (Editorial note: For the large majority of Americanos who’ve never heard of it, the WNBA is the Women’s National Basketball Association, an appendage of the NBA that attracts few fans even in non-plague years, is not self-sustaining, but makes the NBA feel good because they’re supporting women’s sports.) This mindless escalation makes me wonder which sports team will be first to actually burn an American flag during the playing of the anthem, or to attack the band doing the playing. It’s just a matter of time.

The ostensible reason for this disrespectful behavior, not that hell-raisers need a reason these days, is to honor Breonna Taylor, a black EMT who was shot and killed in March by Louisville Police exercising a no-knock warrant connected to a narcotics investigation.

“We are dedicating this season to Breonna Taylor, an outstanding EMT who was murdered over 130 days ago in her home,” said Liberty (for whom?) player Layshia Clarendon. “We are also dedicating this season to the ‘Say Her Name’ campaign committed to saying the names and fighting for justice for black women — black women who are so often forgotten in this fight for justice, who do not have people marching in the streets for them.”

The Kentucky Attorney General’s Office is investigating Taylor’s death, but Clarendon and her teammates have already declared her death murder. Also, since March there have been white Americans killed by blacks and no one is marching for them either, not to mention victims of black-on-black crime. Somehow Clarendon omitted mention of any of these victims in her remarks. I guess in her world, and that of the current hell-raisers, they are of no account.

This in-your-face gesture occurred over the weekend that Major League Baseball hit the field again, with no fans in the stands, no spitting, but plenty of left revolutionary politics and virtue-signaling. The Red Sox have gone whole hog (totus porkus) for Black Lives Matter and the systemic racism canard. My local team, the Tampa Bay Rays, jumped on the Breonna Taylor bandwagon, issuing a tweet from team headquarters calling on the officers involved to be charged with murdering her.

This is a serious issue being treated un-seriously by sports teams, none of whose players or executives were on hand in Louisville when this young woman lost her life. It may well be that no-knock warrants need to go the way of the dodo and disco. They provide a lot of potential for the kind of tragedy that befell Breonna Taylor, who, on the available evidence, was a fine young woman innocent of any crime. But the incident in question was murkier than is being portrayed by those hamming it up. Taylor’s boyfriend shot at police officers, wounding one, and officers returned fire. The event has all the look of a cock-up rather than a racist attack by police. What to do about this specific event and whether or not we should do away with no-knock warrants are not issues for athletes, sports executives, or the mob to resolve. And fans, who just want to enjoy their favorite sports, shouldn’t be required to pick a side on emotional and tendentious political issues like this just to take in a game.

The Rays also declared in tweets that America is systemically racist without advancing any evidence for this, and ignoring the considerable evidence that this is a transparent slander manufactured by the political Left to ensure they get all of the black vote, without which they could not survive, let alone succeed. The Rays don’t even say what they mean by systemic racism. (Nobody else does either, so why should they?) What’s next? Will the Rays tell us who to vote for? What abortion policy should be? Whom to back, the Israelis or the Palestinians? How to deal with the Chinese? What tax policy should be? What about gun control? Religious freedom? Once on the political road there’s no end to it.

This is a big mistake. The Rays, and all sports teams, should stick to putting on ball games. The Rays already have trouble convincing people to pay to get into Tropicana Field. Whatever political position the team takes will divide its already anemic potential audience. If the plague ever departs and fans are allowed once again to return to ball yards, you may be sure the crowds at the Trop will be even smaller. And the TV audience will shrink. As will the audience of every professional sport that has ventured into wholesale left politics. (TV ratings for MLB games over the weekend were high in a sports-starved America. But don’t count on this to last.) I’ve arrived at the point where I will watch Miss Congeniality again before I tune in any professional sport. As for the Rays specifically, I have several Rays caps, which I will bag up and mail to team owner Stu Sternberg with a note instructing him and the boys where they can shove these and their sunflower seeds.

I’m too old to put up with BS. I’ll truly miss competitive sports, which have been such a big and rewarding part of my life for seven decades. But I’m not about to choke down ignorant and destructive revolutionary politics (not to mention empty virtue-signaling) as part of the price of the games. Since the Rays began play in Saint Petersville in 1998, I’ve attended about 60 games at the Trop. As long as Stu and the boys feel obligated to engage in and promote left political causes, with baseball games thrown in to perfume their virtue signaling, then I’ll never see the Trop for a 61st time.