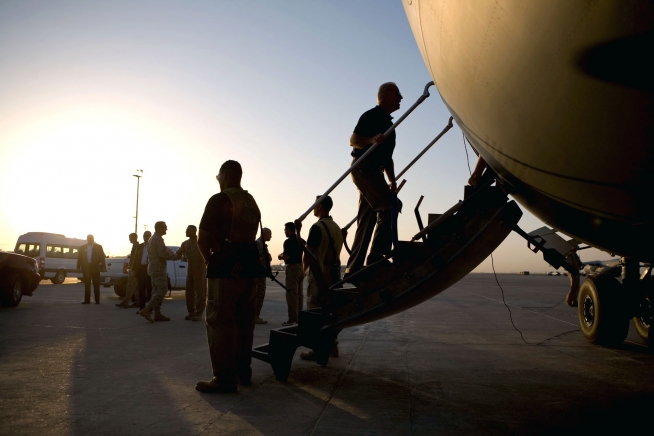 Turning to then-Vice President Joe Biden during a 2009 national security meeting, President Barack Obama famously said, “Joe, you do Iraq.” This allowed President Obama to turn his attention to the “Good War,” and his abortive “Afghan Surge” strategy — resulting in over half of causalities of the Afghan War. Vice President Biden was now in charge of the “Dumb War” in Iraq, and he seized the opportunity. Although the situation in Iraq had improved remarkably since the September 11, 2006 Washington Post headline that “Anbar Was Lost,” the gains were fragile. Starting with the Anbar Awakening, and then building on the success of the General Petraeus-led Surge, the security situation in Iraq had stabilized, U.S. casualties were the lowest of the war, and a true coalition government was on the horizon.

Over the next three years, Vice President Biden failed in securing the Status of Forces Agreement (SOFA) that he “bet his vice presidency on” obtaining. U.S. troops departed Iraq in December 2011, with Biden displaying his penchant for simultaneously credit-plagiarizing and blame-throwing by stating they were simply executing Bush’s plan. While the reasoning behind the Obama administration’s three-year failing effort to negotiate a SOFA has not received much scrutiny by an adoring media, the results of the pullout are well documented. Obama smugly deriding the remaining Al Qaeda in Iraq terrorists — who by now began calling themselves ISIS — as “the JV team,” based on the best military advice of then-CENTCOM commander Lloyd Austin III. ISIS gaining a foothold among the Iraqi government-oppressed Sunni community, declaring a Great Britain-sized Caliphate, and killing tens of thousands of Iraqis and Syrians in the process. ISIS inspiring atrocities from San Bernardino, to Orlando to Paris, with tens of thousands of wannabe Jihadists flocking to Syria and Iraq for training, combat, and the spoils of Holy War, including mass rape. Fleeing Syria were almost 7 million refugees that created an ongoing humanitarian and political crisis across Europe that was nicely stoked by Putin weaponizing the situation.

Today, thanks to a lot of allied bombing, some direct U.S. action, and the killing of an austere religious scholar or two, ISIS is beaten down.

Nine years after the Biden-supervised Obama Administration’s ending of the Iraq War. Let’s review the results:

Today, Joe is in charge of the Good War, and he has brought a lot of the old team back. His clear-eyed decision to pull out of Afghanistan is simultaneously bold leadership, and simply following the Trump administration’s plan. In his July 8, 2021 statement that really hasn’t aged well, President Biden stated, “the terrorist threat has metastasized beyond Afghanistan. So, we are repositioning our resources and adapting our counterterrorism posture to meet the threats where they are now significantly higher: in South Asia, the Middle East, and Africa.”

It was almost if we now had a Global War on Terror.

The President went on to slap down questions about the Intelligence Community assessing that Afghanistan is on the verge of collapse. “That is not true. They did not — they didn’t — did not reach that conclusion.”

The parallels between the previous botched exit and the current botched exit are uncanny. It appears that the individual most famous for being wrong about every foreign policy issue in the past 50 years has taken the wrong lessons from Iraq, and applied them to Afghanistan. Here are the top three.

First, speed up the collapse. Although Iraq’s unraveling began literally the day after a joint press conference by President Obama and Iraqi Prime Minister Maliki in Washington, D.C. on December 13, 2011, it took a couple of years for things to really go to hell. Now, it seems, time is of the essence. Despite the Biden Administration working with a businesslike and professional terrorist group, an undetermined number of U.S. citizens, Green Card holders, and Afghan allies remain stranded in Afghanistan. True, the U.S. Embassy in Baghdad never had to burn all the documents and evacuate the Flag to a civilian airport due to being overrun by ISIS, but it was getting close to that point before the Obama Administration sent troops back into Iraq under Operation Inherent Resolve to stabilize the situation. Today, we do not have any troops in Afghanistan to protect and evacuate American Citizens — the stated purpose of the U.S. government in general and the U.S. military in specific — safeguarding Americans.

Second, things get better when you just walk away. Just as Al Qaeda in Iraq rebranding itself as ISIS, launching a terror campaign, killing and torturing thousands, and establishing a caliphate, the same will happen in Afghanistan; although this time, the terrorist do not have to fight for ground. They have a whole county, surrounded by nuclear-armed facilitators. Already there are reports of Jihadists flowing into Afghanistan, and this will continue as terrorist training camps begin springing up. Laughable are the explanations that ISIS-K is somehow the sworn enemy of the Taliban. They might be, but in the same way that Philip Tattaglia, Emilio Barzini, and Moe Greene were sworn enemies of the Corleones: they are Mafiosi, or in this case Jihadis. They share the same goal, but who is in charge is the only question. Is one group really any better than the other? Taliban or ISIS-K? Corleone or Barzani? (Insider note: once we declare victory over a terrorist group, and they spring back up, we simply rename them — they are all pretty much Al Qaeda)

Third, chaos stays contained. Jihadists form splinter groups and strike out on their own when they feel their leaders are just not crazed enough for the task. Although fighting for the same cause, they resort to calling each other apostates, disavowing each other, and going about one-upping their murderous ways so they can break the Jihadi internet in an attempt to garner recruits. Let’s face it, everybody loves a winner, and whoever is posting the most gruesome, most ruthless video clips gets the pick of the budding Jihadi litter that is heading to Afghanistan. Soon the Taliban, ISIS-K, Al Qaeda, a splinter group, or maybe even and old school group like the Muslim Brotherhood will pick up steam in the coming months, making its bloody debut in an airport, concert hall, or schoolhouse in the dar al-harb. Quite possibly near you. Just as ISIS found it legs fighting in Syria, with their brand of Jihad eventually engulfing both Iraq and Syria and spreading to over 85 countries, expect a similar wave of terror to flow out of Afghanistan. Especially since Afghanistan is now extremely well-armed, thanks to the U.S. taxpayer. Pakistan barely has control of its tribal regions and their central government is hardly beloved. Expect the movement to spill back into Pakistan, the ramshackle keeper of what all Jihadists want — nuclear weapons.

Emboldened over the defeat of Soviets, Bin Laden, Al-Zawahiri, and the other brothers founded al Qaeda in Afghanistan in 1989. It took them a couple of years to get going, but by 1992 they were blowing up hotels in Yemen and a year later they took their first shot at the World Trade Center. They did this starting from scratch. How quickly can the terrorist act now that they have a county of their own, and an established network around the world?