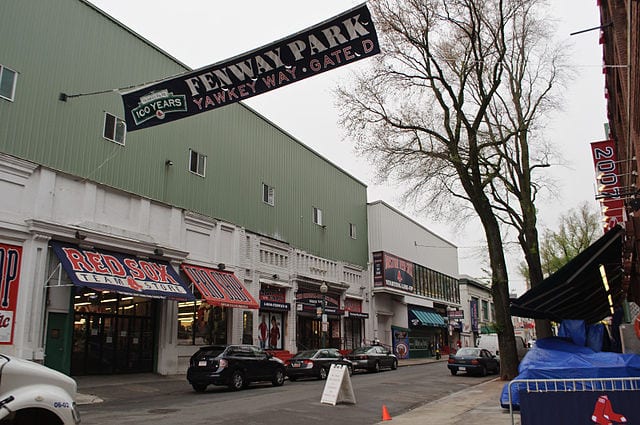 After months of bellyaching and threats by current Red Sox owner John Henry, the official purging of former Red Sox owner Tom Yawkey is upon us as the Red Sox appear to have the proper paperwork in order to change the name of the famed Yawkey Way outside Fenway Park. One imagines if he could, John Henry, much like Kim Jung Un has done with those who fall out of favor with him, would erase Yawkey’s image out of old public photos showing him as Red Sox owner. If Yawkey’s name never passes anyone’s lips again, all the better.

During his lifetime Tom Yawkey was a rare thing in the sports world, an owner who for four decades was loved by both the fans and players. Additionally, the Yawkey family has given millions to charity over the years to help those less fortunate in the Boston area. Yawkey’s big sin, which he is now paying for long after his death, was that the Red Sox were the last team to integrate, in 1959, and in accordance with 21st century standards the only proper conclusion is that Yawkey’s views on race must trump every good deed the man ever committed.

For the last several decades Americans have been told over and over, almost like how a child recites the ABCs, that race doesn’t matter, and diversity will solve all ills. It pains and saddens me to announce that race not only matters, it appears to be everything. If you don’t share my negative outlook, take a look at the reality of human behavior. At the same time the story broke that Yawkey Way was on the way out, doing a simple perusal of headlines without narrowing a specific search for stories involving race would have shown the following news items:

I could go on and on and on, but you get the point. We are race mad, and matters of race are everywhere, from the trivial to the lethal, with no signs of abating.

To return to the Red Sox, if one gives John Henry the benefit of the doubt that his intentions are good, one imagines smug satisfaction on his part that his fight against Yawkey Way is his contribution to a world that he hopes someday will be free of racial tension.

But in reality, there is an uncharitable aspect to what Henry and people like him are doing that helps inflame the bonfire of racial tension instead of squelching it. Why shouldn’t Yawkey have a street named for him in Boston? Yawkey’s personality and contributions to the City of Boston were enormous. If he doesn’t deserve a street named after him, who does? Must matters of race dominate every aspect of life?

When we purge the past because the person in question doesn’t meet the modern PC crowd’s standards, it forces everyone to take sides in the race wars. You’re either with John Henry or you’re not, and now a tension exists where there wasn’t one before, all over something so minor as a street name. And once people take sides in the race debate everything gets exaggerated and becomes a cultural flash point.

Yawkey Way will soon return to its original name of Jersey Street (yawn). The Red Sox boldly proclaimed, “Restoring the Jersey Street name is intended to reinforce that Fenway Park is inclusive and welcoming to all.” The irony, of course, is before this made up controversy, nobody questioned if the Red Sox welcomed all to their games. Now Red Sox fans have been forced to take sides and wonder if they are truly welcome.