Blog,Politics,Top Story Antifa,Police,Portland What’s in a Name? - The American Spectator | USA News and Politics
Menu
Blog
What’s in a Name?
Portland’s police department by any other name wouldn’t smell as sweet. 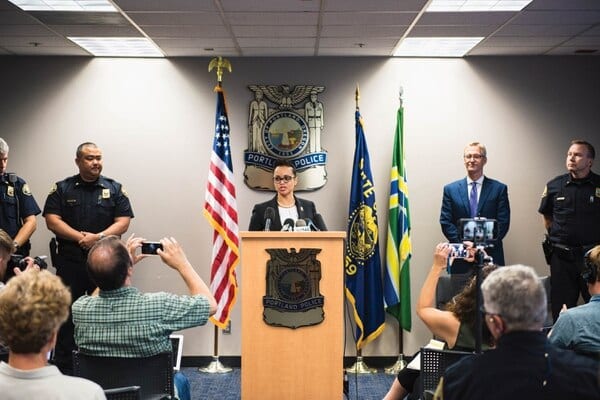 Just watched a news clip of the chief of the Portland Police Department, a wholly owned subsidiary of Antifa, giving a non-explanation of her department’s non-response to the fascist thuggery of Antifa, of which there is plenty and about which her department does nothing beyond standing by to see that the thugs are not interrupted as they go about their villainous work.

Even though the chief said nothing that would lead me to think she has a clue about what law enforcement is about, or that things will improve in the People’s Republic of Portland, I do think I understand the situation a little better. It seems the chief’s last name is Outlaw.

No, no, no, I’m not having you on. Her last name is Outlaw. Honest. You could look it up. How stunningly appropriate.

All right, the name the woman was given at birth was not her choice and is in no way defining in itself. But you would have thought that when she chose law enforcement as a career, she could have invested the small amount required for a name change. More importantly, though, whatever the chief’s name, on the available evidence outlaws are the ones that city and that police department are presently being run for the convenience of. And that’s a crime, or should be.