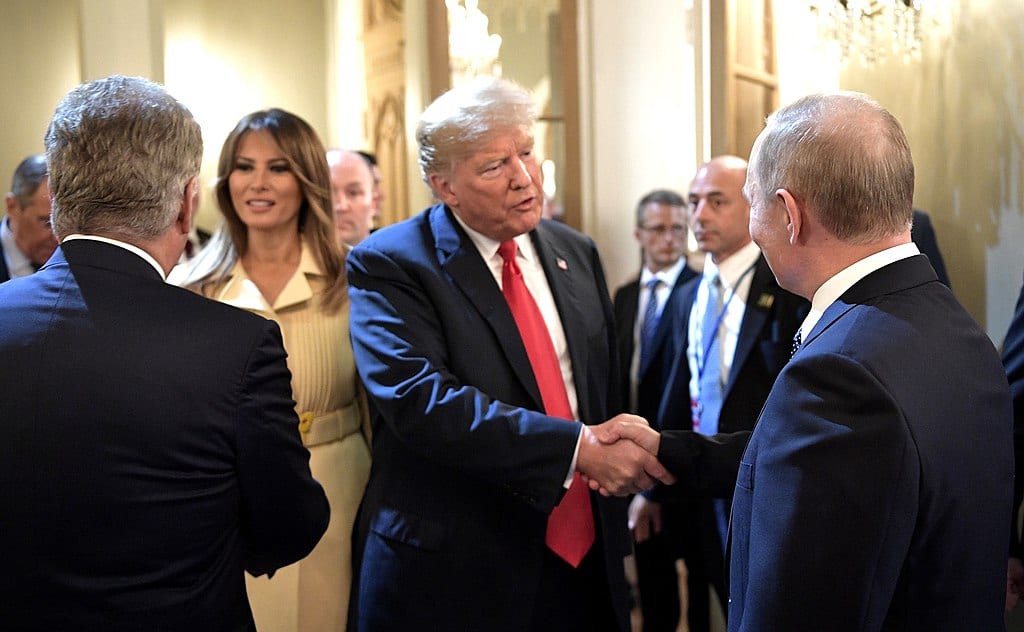 In a Friday interview President Trump repeated that for him to have a good relationship with Russian President Vladimir Putin “…is a positive, not a negative.” He added that if things don’t work out he’d be the worst enemy Putin ever had.

Just what “things” was Trump referring to? When and how are they supposed to work out? Trump, as usual, didn’t explain.

It’s been a week since the Helsinki summit and neither the top dogs in the Trump administration nor the public know what he and Putin agreed to, if anything. All we can do is try to interpolate among the leaks, the press reports, and the (dis)information the Russians are peddling.

In their joint press conference last Monday, Putin took the lead in outlining what they discussed, implying at times what they had agreed to.

First is the issue of nuclear arms control. Putin said that “we” — the two of them — “believe it is necessary to work together further on… the disarmament agenda, military and technical cooperation. This includes extension of the Strategic Offensive Arms Limitation Treaty.”

To understand this, we need to remember that several interlocking treaties supposedly govern how both nations build, deploy, retire, and sometimes store nuclear weapons.

That agreement was superseded by the 2011 “New SALT” agreement signed by Obama and Putin. In addition to increasing the limitations on nuclear weapons deployed, that agreement included in the overall limitations the number of nuclear weapons that are in possession of each nation. It also reportedly included ballistic missile defense systems within the number of 800 missiles that each nation was permitted to possess.

Since President Reagan announced development of ballistic missile defenses, the Soviets — and now the Russians — have been seeking to include them among limits on offensive weapons. Obama reportedly gave it to them. I say reportedly because: (a) the Russians claim that it has this effect; and (2) the secret side agreements, in which the limit may appear, have never been made public.

Putin would love to further limit our nuclear arsenal and especially our missile defenses. At the Helsinki presser, he said, “It’s a dangerous situation with a global American anti-missile defense system, it’s the implementation issues with the INF treaty. And, of course, the agenda of non-placement of weapons in space.”

Trump had no answer to what Putin said. He made a blanket statement that both nations’ national security councils would follow up on all the issues addressed “…and continue the progress we have started right here in Helsinki.” That’s the same approach he took after his summit meeting with Kim Jong Un. Without clear goals, further negotiations with Putin and Kim aren’t likely to produce anything beneficial to our national security.

Does Trump believe that we should further reduce our nuclear arsenal while Russia is apparently cheating on its commitment in the INF Treaty? Does he agree that our ballistic missile defense systems are dangerous to world peace? Does he agree that weapons shouldn’t be put in space despite the fact that the cheapest and most effective type of ballistic missile defense would be a modern version of the space-based “Brilliant Pebbles” plan announced by President Reagan in 1983?

There could be a new round of arms control talks but what would be the goal? The only objective from our standpoint would be to remove the implicit limitation on missile defenses in the Obama New START Treaty. The secret side-agreements to that treaty have to be made public before any new arms agreement can be negotiated.

Because Trump isn’t a man who focuses on details, it’s improbable that he is at all knowledgeable of the INF, SORT, and the other arms control treaties. How can you set goals for new arms reduction talks without a thorough grounding in what already exists and what effects have been achieved?

If Trump agreed to a new round of arms control talks in Helsinki, we need to know that and we need to know what objective he seeks. Neither the public nor his administration knows what he wants. Perhaps he doesn’t either.

The second big issue is what, if anything, Trump and Putin agreed to in regard to the seven-year war in Syria.

About a week before the summit, National Security Adviser John Bolton said that Trump wanted Putin’s help in pushing Iran out of Syria. Faint hope.

Putin said that the task of establishing peace and reconciliation in Syria “could be the first showcase example of the successful joint work” between Russia and the U.S. He said that the south of Syria should be brought into full compliance with the 1974 treaty between Syria and Israel that separated their forces. He made no mention of Iranian forces which have established themselves throughout much of Syria, especially in southern Syria close to the Golan Heights and Israel.

Trump said that Iran wouldn’t be allowed to gain from our anti-ISIS campaign in Syria that has been conducted in northern and eastern Syria, far from the Iranian forces near the Israeli border. About 2,200 U.S. troops — Marines and special forces — are in Syria. U.S. Air Force and Navy aircraft have struck Syrian government and Russian forces there from time to time. Trump has often said that he wants to pull all U.S. forces out of Syria.

Director of National Intelligence Dan Coats said Thursday, “We have assessed that it’s unlikely Russia has the will or the capability to fully implement and counter Iranian decisions and influence.” On Friday, Russia’s ambassador to Iran said that Moscow has no intention of pressing Iran to withdraw. He denied any strain between Moscow and Tehran.

Trump said that he believed Putin was helping Israel. If that were true, Putin would be pushing hard for Iran to pull back from the Golan Heights area which he isn’t doing and won’t do. As Coats and the Russian ambassador to Iran indicated, it’s just not going to happen.

U.S. Central Command — CENTCOM — is responsible for Syria. Last week CENTCOM commander Gen. Joe Votel said he’d received no new guidance from the White House on Syria, so it’s business as usual for him. Votel said, “I’m not privy to any kind of grand bargain discussion or anything like that.” If he isn’t, who is? What Trump’s goal in Syria may be is a mystery to the public and to his administration.

Coats was surprised that Trump had invited Putin to Washington for more talks in the fall. He said sarcastically, “That’s going to be special.”

Coats doesn’t know what happened in Helsinki and neither does Votel. Secretary of State Mike Pompeo said that there was a discussion about Syria that might cause Syrian refugees to move back to their country, but he provided no details because he likely doesn’t know them. Defense Secretary Mattis met with Trump on Thursday to be briefed on the talks, but he likely wasn’t more informed at the end of the meeting than he was when it began.

When Trump said that Putin agreed to help with North Korea’s denuclearization, he said that there was no rush to do so. As usual, he provided no details. In saying there was no rush he took a great deal of pressure off Kim Jong Un and ensured that Kim can delay for months or years any effort to take apart his nuclear weapons and missiles. How long will he wait?

Trump is reportedly angry that the ongoing negotiations with the Norks are stalled. Given the history of three generations of the Kim regime, what else could he expect? There was no deal to disarm the Norks made in Trump’s summit with Kim, only an entirely vague commitment. Why now say there’s no rush, other than to excuse the inevitable failure of the disarmament talks?

Trump is, unfortunately, enabling Putin (and Kim and China’s Xi Jinping) to control his foreign policy agenda and the outcome of any negotiations. That’s not leadership.

Trump has the obligation to explain himself to the American people and the world.

Does he want more arms control agreements, and if so, what is his goal?

Does he want to get Iran’s forces out of Syria, or at least out of southern Syria near Israel? If so, what is he prepared to do to force the matter? Does he still believe — as he has indicated several times — that any peace agreement in Syria cannot include the continued reign of the Assad regime?

Does he intend to wait and see if Putin will help with North Korea? For how long will he wait?

We don’t know. And because we don’t, Trump has the obligation to explain himself. Trump doesn’t like making policy speeches. He’s made very few since he was inaugurated. It’s time for him to make a foreign policy speech that tells us, and our allies, what went on in Helsinki, what agreements were reached and what — and when — he wants these agreements to produce his desired effects.

The status quo, as Ronald Reagan told us, is Latin for “the mess we’re in.” Right now, the world is in a dangerous, volatile mess.

It’s not enough for the president to just let matters go on at their own pace, directed only by hostile powers such as Russia, Iran, and North Korea. Explain yourself, Mr. Trump. We’re waiting.