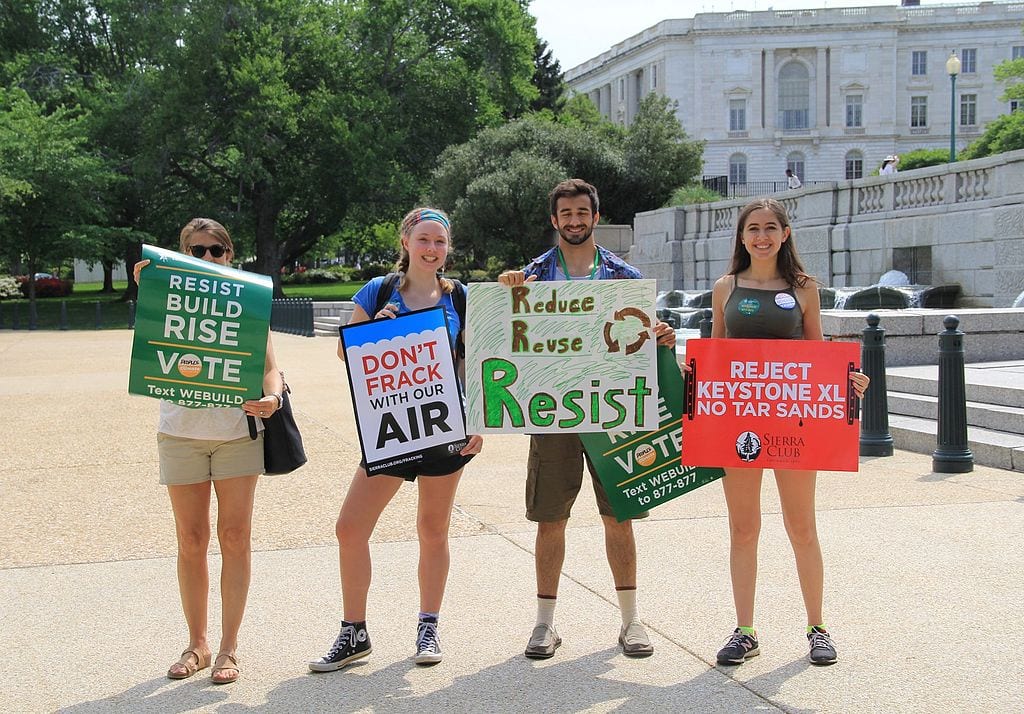 And here you thought the Sierra Club was all about clean air, clean water, and saving the snail darter. Silly you.

Emails sent out by this well-heeled “environmental” group since the recent midterms will disabuse you of this naïve idea. There has been considerable mission creep amongst the organic tote-bag crowd. I’ll share from just a few of these emails, starting with one signed by Sierra executive director Michael Brune:

“It’s been less than 12 hours since we took back the house and won governors’ races in states like Colorado, Illinois & Wisconsin.”

Is there any doubt that the “we” used here instructs us that the Sierra Club and the Democrat Party are coterminous? There’s not the faintest suggestion here that the environment is a bipartisan concern.

Michael goes on: “Gerrymandering. Voter suppression. Lies. What Republicans did this campaign is just a taste of what we’re going to see for the next two years.”

The enormity of it. Those savage, sadistic Republicans must be little more than limbs of Satan, bent on destroying the earth and themselves with it.

Worrying about global warming, fracking, use of fossil fuels, lack of bike paths, and insufficiently extreme protections for everything that creeps and crawls on the earth or flies above it would be quite enough for anyone. But Sierra Clubbers must also carve out time to try to ensure that the Mueller investigation goes on, as it appears it will, until the end of time. Something called SierraRise calls the appointment of Matt Whitaker as acting attorney general to replace Jeff Sessions “an emergency for our democracy.”

Are these Lexus leftists easily excited or what? This is setting the bar for emergency pretty low. But then how do you raise funds without an emergency? So if there isn’t one, you have to manufacture one.

Sierra’s charges against Whitaker, other than that he “shares many of his former boss’s toxic beliefs on civil liberties,” include that Whitaker has written an article suggesting that Mueller has “gone too far.” (He hasn’t?) They finish with, “This is the boldest attack yet on the Mueller investigation — and the rule of law.”

Those of you who didn’t know the Mueller investigation is a proxy for the rule of law can sit in the corner wearing the dunce cap. And if you’re wondering what all this has to do with setting aside habitat for gray wolves, SierraRise explains: “If the rule of law means nothing, then the entire bedrock legal infrastructure which exists to protect the environment in our country, including the Clean Air and Clean Water Act, the Endangered Species Act, and more can be rendered meaningless. We can’t let that happen.”

Oh. Wow. This is a bigger and grosser stretch than the last time Whoopi Goldberg put on spandex.

Sierra is also deep into identity politics, you will not be surprised to learn. Here’s a PC scorecard from one Ariel Hayes, Sierra’s national political director (she must be very busy, considering how many left hobby horses Sierra rides hard and puts up wet).

“I’m heartened by the historic wins last night,” La Hayes writes. “We elected the first two indigenous women, the youngest woman, and the first two Muslim women to Congress, as well as the first openly gay man to serve as governor, to name a few.” Apparently the only species Sierra clubbers are not concerned about the extinction of which is the conservative, straight white male.

(By the way, Indigenous is one of those baggy, meaning-free categories that only signifies to a leftist. Political humorist P.J. O’Rourke describes his family as indigenous Ohioans, sometimes photographed kneeling in their colorful bowling shirts.)

Just as so many sports writers and sportscasters have recently expanded their jurisdiction from the games they’ve traditionally covered to include preaching social justice and advancing the left social agenda, so the venerable Sierra Club can no longer be confined to environmental concerns. They’ve become part of the resistance, agents of the larger leftist cause.

It’s hard to concentrate on the needs and comforts of gray wolves when you’ve got Donald Trump and the Republican Party to take down. But it’s clearly more fun this way. And better for fundraising, at which the Sierra Club, with total assets north of $150 million, has never been a slouch at. It’s a very political environment at Sierra, and a unipartisan one at that.

Too bad there’s not a conservative Saturday Night Live. If there were, this bunch would take their licks on it regularly. And boy would they deserve it.