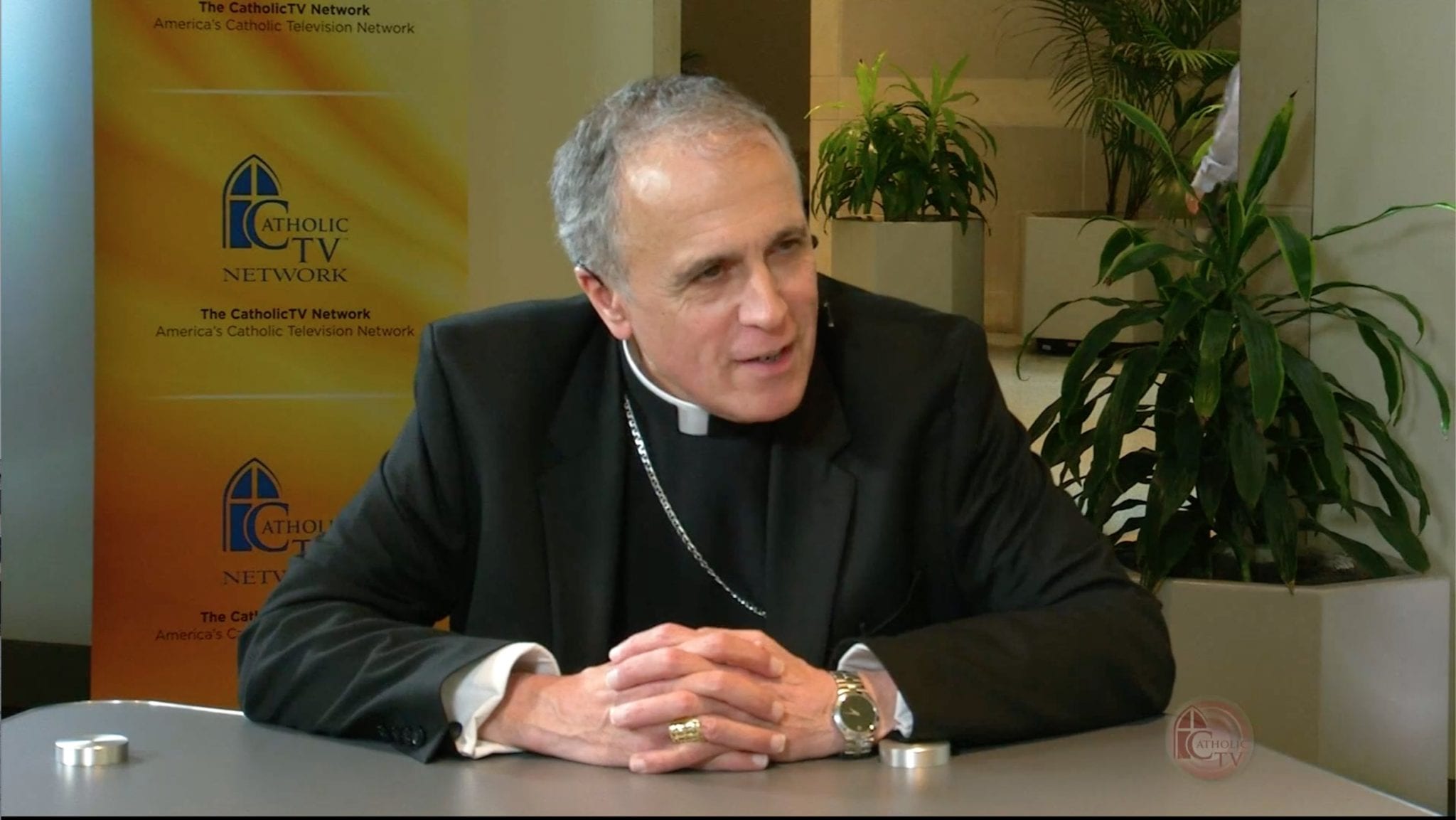 More Politics
Sign Up to receive Our Latest Updates!
Register
Hot Off
The Press
Political Hay
Answering Liz Cheney
by Jeffrey Lord
Special Report
Religious Oppression on the March Worldwide
by Doug Bandow
Loose Canons
Dumbing Down Intelligence
by Jed Babbin
The Right Prescription
Will the Left Respect Liz Cheney in the Morning?
by David Catron
Technically Right
The Social Justice Mob Tries to Do to Tech What It Did to Academia
by Debra J. Saunders

Cardinal Daniel DiNardo, whose Galveston-Houston chancery was raided this week by prosecutors in search of abuse-related files, always struck me as a pretty haunted and compromised figure. DiNardo came out of Pittsburgh and the corrupt milieu of Cardinal John Wright, who was an accused pederast and a mentor to such slimy prelates as Donald Wuerl. Google DiNardo and Cardinal Wright and a creepy picture comes up of a young DiNardo sitting next to Wright in a white tuxedo. Wright liked to dress his seminarians up in such attire, just as Wuerl would later delight in having his young priests wear waiters’ uniforms and serve appetizers at parties held at his Pittsburgh mansion.

Many of the tributaries from the Church’s river of filth flowed out of Wright’s Pittsburgh. Wuerl, for one, who served as Wright’s secretary for many years, learned his nasty and self-indulgent clericalist habits at Wright’s knee. In the New York Review of Books, Garry Wills once recalled Wright’s life soaked in opulence, entitlement, and delusion:

In the early Sixties, I spent a day with John Wright, then the bishop of Pittsburgh, who loved to sweep around town in his chauffeured limousine, greeting people with his ring thrust forward for the kissing. At one point he directed his limousine to a Church-run home for deserted pregnant women, an admirable institution. Before we went inside, he had the chauffeur open the car trunk, which was entirely filled with large boxes containing Barbie-like dolls. (They may have been Barbies, in fact; I could not have told, since I was not then familiar with the product.) He told me a Catholic businessman had given him the dolls to hand out as presents, so he had the chauffeur load his arms with these toy-adult figures to bestow on the expecting mothers. His satisfaction in playing Lord Bounteous made it impossible for him to recognize the ludicrous inappropriateness of the gifts. They were infantilizing tokens, delivered by one who was himself infantilized.

Back in his mansion, the bishop took me to a large locked room that contained his favorite treasures — books, manuscripts, relics, memorials, paintings, and statues, all of them celebrating Saint Joan of Arc. He boasted that he had every movie made about his heroine, beginning with silent treatments. He had projection equipment to show them all, and said that he had not only been an expert adviser for the 1948 film Joan of Arc, but got to know its star, Ingrid Bergman. Some Catholics censured Ms. Bergman after she publicly deserted her husband a year after Joan of Arc’s release; but her contribution to his self-importance made Wright forgive her. I left the mansion certain that I had been in the presence of a large fat baby who would never grow up. Later, as a cardinal appointed to the Curia in Rome, he would prove that he could be more pompous than any Italian prelate.

But that “large fat baby” was very dangerous. “Wright’s pederastic predilections were an ‘open secret,’” writes author Randy Engel (whose book, The Rite of Sodomy, details a specific accusation of abuse leveled at Wright by Bill Burnett). Wright was one of the godfathers of a high-living, dilettantish Gay Mafia within the Church, which not even in-the-know writers from the liberal Catholic media dispute these days.

Former Newsweek religion editor Kenneth Woodward, for example, hints at something I have long asserted: that the creepy relationship between Wuerl and Wright is critically important background which explains not only Wuerl’s rise to the top of the Church but also Wuerl’s willingness to serve as the protector of pederasts. This is a long block quote from Woodward, writing recently in Commonweal, but it is worth reading carefully both for its text and subtext:

During the nearly four decades I spent writing about religion for Newsweek, I heard numerous tales of “lavender lobbies” in certain seminaries and chanceries, told mostly by straight men who had abandoned their priestly vocations after encountering them. At one time or another, the whispering centered on networks in Los Angeles, Milwaukee, Chicago, or Pittsburgh, among other dioceses. One of the few priests to complain in public was the late Andrew Greeley, who spoke of gay circles operating in the administration of Chicago’s Joseph Bernardin, a cherished friend of his. As far back as 1968, I heard similar rumors about priests serving in the Roman Curia, mostly from Italians, who are generally more relaxed about homosexuality than Americans and unsurprised when those leading double lives are outed. What concerns me, though, is not simply personal hypocrisy, but whether there are gay networks that protect members who are sexually active.

Here it is worth revisiting the career of Cardinal John J. Wright (1909–1979) who, like McCarrick, was the subject of numerous stories about his own sexuality. Again, these came mostly from former seminarians and priests of the Pittsburgh diocese, which had a reputation during Wright’s decade there as a haven for actively gay clerics. That was especially true of the Pittsburgh Oratory, which Wright founded in 1961 as a religious center ministering to Catholic students attending the city’s secular universities.

Wright was an intellectually gifted churchman whose reputation as a liberal in the Spellman era rested chiefly on his interest in literature and the arts and his voluminous essays on those subjects and others published in liberal Catholic magazines, including this one. In 1969, at the age of sixty, Pope Paul VI chose Wright to head the Congregation for Priests in Rome and elevated him to cardinal. It was there, in the frenzied initial years of the post-council era, that I first heard stories of his leading a double life rather openly with a younger lover. What interests me now is not the private details of this double life, but whether it influenced how he ran the congregation overseeing the selection, training, and formation of the clergy. Donald Wuerl, who recently resigned as archbishop of Washington D.C., would surely know the truth about Wright. Wuerl’s first assignment after ordination at the age of thirty-one was as secretary to then Bishop Wright of Pittsburgh in 1966. The younger priest was said to be closer to the cardinal than the hair on his head. He became Wright’s omnipresent full-time personal assistant when the latter moved to Rome, even sitting in for him during the papal conclave that elected John Paul II.

In his own lifetime, Wright never paid any price for his scandals or suffered any consequences for foisting homosexual priests on the Church. But the costs of that corruption are coming due for his protégés and former seminarians. Wuerl’s career has more or less ended in disgrace, though he hangs on under a corrupt pope as an “apostolic administrator” and a member of Vatican congregations. And now the bill has come due for DiNardo in the form of a police raid this week on his chancery. Prosecutors are said to have seized his computer and personnel files.

What began as a theological turn away from orthodoxy and rigor in the 1960s — one which double-living prelates like Wright quietly blessed, all while posturing as “center-right,” the same stance, by the way, the Wuerls fake up — is ending in police raids, bankruptcies, and weekly scandals.

I ran into DiNardo in Baltimore at the October gathering of U.S. bishops. He was sitting on a couch in the hotel lounge alone, talking on his cell phone breezily about his Thanksgiving plans, as if he had just completed an annoying corporate gig at the Marriott. No sooner had I asked him a well-informed question about that scandalously unproductive bishops’ gathering than he was accusing me of not “loving the beauty of the Church.”

It was a rather odd line of attack for a cardinal in the thick of one of the grossest scandals in the history of the Church. Had he learned, I wondered, such pompous clericalist stalling and misdirection from Cardinal Wright? I noticed that the slightly slouchy seminarian in Wright’s white tuxedo hadn’t changed his body language much over the years. He remains in word and posture dyspeptic and defensive, whose rank-pulling may still work on gullible Catholics but clearly no longer impresses police.At his chancery, where prosecutors are carting off abuse files he won’t give them, the “beauty” of Catholicism is hard to see.

3
Another Perspective
COVID, Obesity, and the Death of Personal Responsibility
by Michael Fumento

There are two gravesites I have made a habit of...Read More