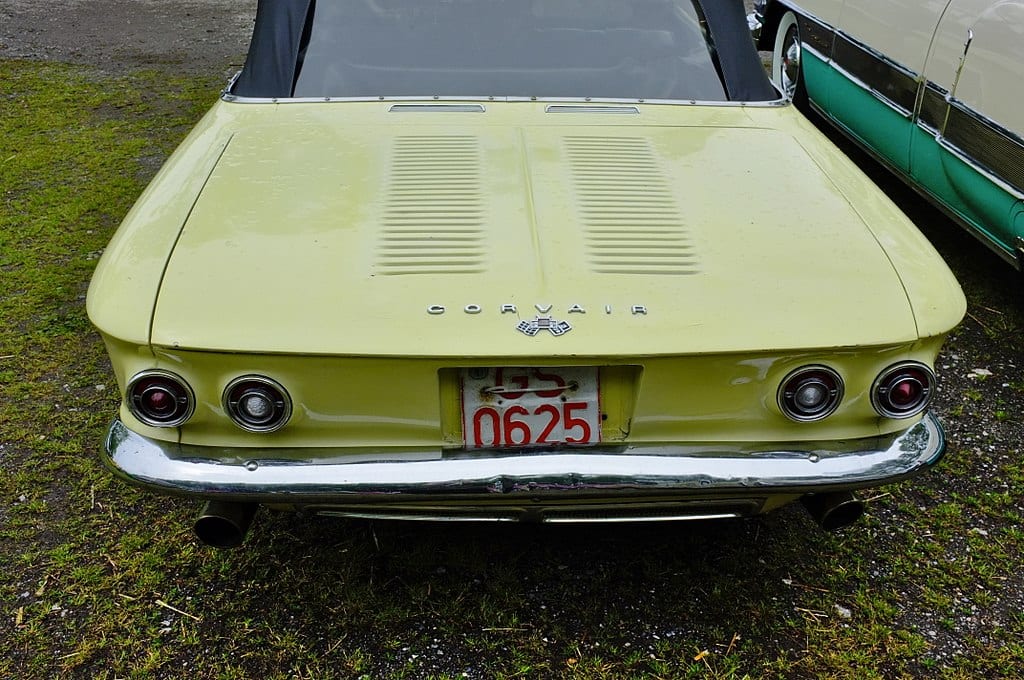 One of the reasons to go to an old car show isn’t so much because the cars are ancient but because they are weird — relative to the same, as they are today.

Weird under the hood, especially. Which is sometimes under the trunk.

One such oddball is the Chevrolet Corvair, which GM built as a kind of better VW Beetle — or poor man’s Porsche 911, depending on your point of view.

It was the late 1950s, and in those days cars were hashed out between the customer and the company, which designed the car in such a way as it hoped would appeal to him. There was no red-white-and-blue middleman interposing his notion of what ought to be designed and what ought to be bought. This allowed almost cartoonish freedom of expression, both form and function. It accounted for the almost Cretacious-looking mechanical velociraptors of the era, such as the grinning and finned Cadillacs favored by Elvis — as well as barely cars at all like the VW Beetle.

The VW Beetle defined minimalism in transportation. It didn’t even have an oil filter — just a reusable screen. Early models had a fuel dipstick. There was just enough horsepower to achieve 60 or so miles per hour if the road was flat and the headwind light. It wasn’t much, but it beat walking, and millions were sold to empty-pocketed postwar youth and to millions of others who simply liked the idea of keeping what they had in their pockets.

GM thought the idea was sound, which it obviously was as the cars sold so well they were eating into GM’s small-car profits.

Why not build a better Beetle?

This was the genesis of what became the Chevrolet Corvair, which made its public debut in 1959 for the 1960 model year. 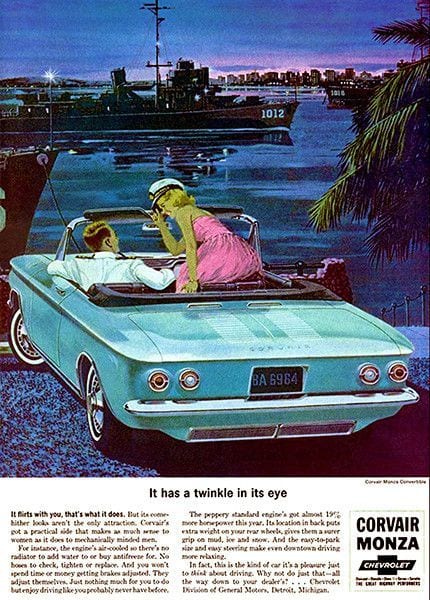 Unlike the Beetle, which came just one way — a two-door hardtop coupe with very cramped rear seats — the Corvair was offered with two or four doors and with — or without — a roof. It also offered multiple configurations of its air-cooled, trunk-mounted six-cylinder engine.

The Beetle’s four-cylinder engine came just one way — the underpowered way. You could hot-dog thing with after-market parts — and this was a popular diversion among the youth of the ’60s — but the as-it-came Beetle offered your choice of slow or slow — in your pick of colors, at least.

This isn’t criticism. It was in keeping with the Beetle’s prime directive. Simplicity über alles. It wasn’t literally the people’s car — volks wagen — for nothing.

Specifically, the German people in the aftermath of the Great War, which left millions of them on foot and in need of a way to get around otherwise that was within their means. Germany in the early ’30s was in some ways like America had been 30 years earlier. The volk needed a wagen that was basic and cheap — with everything else optional. Or not even available.

The Beetle was Germany’s Model T.

But in America, by 1960, something more was wanted — or at least, there seemed to be a crying need for it.

Hence the Corvair’s standard six-cylinder engine. Like the Beetle’s four, it was horizontally opposed as well as air-cooled. But very much unlike it, the Corvair’s engine came standard with two carburetors rather than just the one — and you could opt for four of them. There were also hotter camshafts — and even a turbocharger, an exotic thing back in the ’60s.

And hence the inevitable — and favorable — comparisons of the Corvair with Porsches, which were similarly laid out but a lot more expensive. The Corvair wasn’t much more expensive than a Beetle — which was rarely compared favorably with Porsches. In fact, when it went the other way — Porsches with VW-related engines — the comparison was generally held to be extremely unfavorable.

The ’Vair was — like the Porsche — a technical tour de force for its era. Its aluminum engine used intricate casting technology light years ahead of the crude-by-comparison rough cast-iron pourings then typical. Its rear-mounted transaxle was also exotic for the time.

As, of course, was its handling — which proved to be its undoing.

Not because it handled poorly. In fact, it handled excellently in comparison with the bias-ply’d road oafs of the era. The problem was marketing mismatch.

Few regarded the people’s car as a hot rod, and thus it wasn’t driven like one. More to the point, it was hard to drive the people’s car like a sports car, even if you tried to. There’s only so much trouble you can get into in a car with 36 horsepower and a top speed, all out, of maybe 80 mph.

But the Corvair offered 110 horsepower — in the Monza — and 150 in the turbo’d Spyder. This caused some people to drive it like a Porsche. Many of these would have been kept in check — as regards the Porsche — by the Porsche’s inaccessibility due to its unaffordability. The people who could afford one generally knew how to drive one.

But the average American had never driven a rear-engined sporting car with an independent suspension (then an exotic thing) at high speed — and understood nothing about how critical differential tire pressures were for handling stability in a car with a heavy rear and a light front.

They suicidally filled all four tires to the same pressure — an error compounded by their not knowing to stay on the gas in a high-speed curve. The result was sometimes fatal tuck and roll — and the exploitation of a few such high-profile incidents (e.g., the death of the comedian Lenny Bruce) by an emergent young ambulance chaser by the name of Ralph Nader.

The Corvair — which was only “unsafe” at speed if there was an idiot behind the wheel — was effectively tarred-and-feathered by Nader, who never pursued the essentially similar Beetle or Porsche for the same supposed crimes. Though hugely successful at first, the juggernaut of bad press generated by Nader did to the Corvair what “cheating” on government emissions certification tests has done to modern diesel-powered VWs.

Both are no more.

Which is a shame — because both gave customers something different for a change. In the land of the same-same, that’s now a no-no.

Got a question about cars, Libertarian politics — or anything else? Click on the “ask Eric” link and send ’em in!