Another Perspective America First,Charles de Gaulle,France,July 4,World War II We Need an American de Gaulle - The American Spectator | USA News and Politics
Menu
Another Perspective
We Need an American de Gaulle
Who this July 4 is proud to be an American? As a nation, we could learn from the man who made France great again.
by Francis P. Sempa
President Charles de Gaulle in Paris, May 1968 (Attribution: Bundesarchiv, B 145 Bild-F026330-0032 / Gathmann, Jens / CC-BY-SA 3.0/Wikimedia Commons) 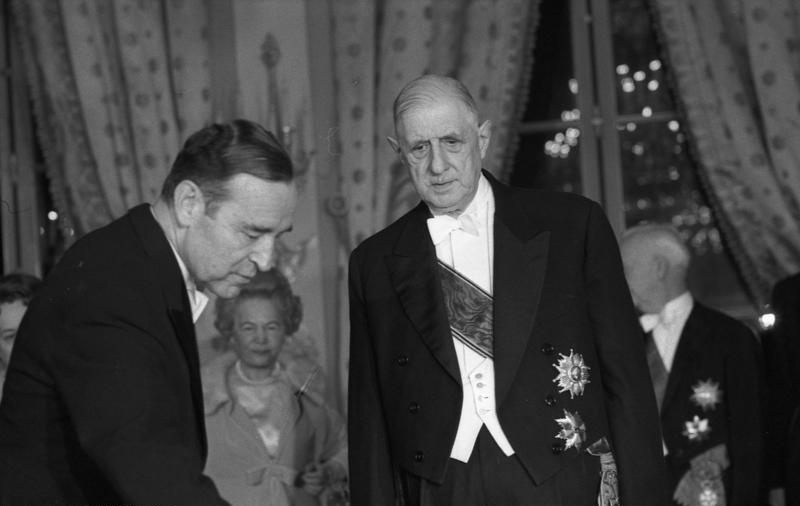 As we approach Independence Day celebrations, the Washington Times reports that a recent Gallup survey shows a growing partisan and ideological divide regarding patriotism. The poll indicates that 58 percent of Republicans, 26 percent of Democrats, and 34 percent of Independents said they are “extremely proud” to be Americans. Among college students, 76 percent of conservatives and 40 percent of liberals feel “proud to be an American.” The anti-nationalist, pro-globalist cultural wokeism appears to be having its effect on the American people. And our current crop of leaders, who eschew and sometimes condemn nationalism, gives one little hope that things will soon change. We need an American de Gaulle.

America’s current ruling class lacks the nationalism that underpinned de Gaulle’s every move as France’s leader in times of war and peace.

Charles de Gaulle began his glorious War Memoirs with an explanation of his unconditional love of France. “All my life,” he wrote in the book’s first sentence, “I have thought of France in a certain way.” He explained that his love of France was “inspired by sentiment as much as by reason.” He imagined France as “dedicated to an exalted and exceptional destiny,” and stated that in his mind “France cannot be France without greatness.” De Gaulle was an intense and proud French nationalist. America today needs a leader like de Gaulle.

De Gaulle recalled in his memoirs that as a child he had an “anxious pride” in his country that came to he and his siblings “as second nature.” He marveled at the symbols of France glories: Notre Dame, Versailles, the Arc de Triomphe, the Invalides. He enthused at his country’s successes and was saddened by its failures. In his adolescent years, he wrote, “the fate of France … interested me above everything.”

De Gaulle described joining the army as “one of the greatest things in the world.” But he also recalled watching “the enemy of tomorrow endowing himself with the means of victory while France was still without them.” When France fell to Hitler’s onslaught in May-June 1940, de Gaulle refused to surrender and called upon his countrymen to join him in the Free French movement because as he told his countrymen, “the flame of French resistance must not and shall not die.”

When four years later Paris was liberated, de Gaulle responded to what he described as a “call to honor from the depths of history, as well as the instinct of the nation itself … to assume French sovereignty” and to “demand from the world respect for the rights of France.” He memorably wrote of this moment: “Gradually the call was heard. Slowly, severely, unity was forged. Now the people and the leader, helping each other, were to begin the journey to salvation.”

The salvation came on May 8, 1945 — VE-Day. “Now France was revived, respected, recovering her territory and her status,” de Gaulle wrote. He looked to the future: “How would we keep alive the flame of national ambition, relit beneath the ashes by the storm, now that the wind had fallen?”

David Polansky has noted that “What was noteworthy about de Gaulle’s patriotism was not simply its depth or ardor but its breadth.” De Gaulle’s nationalism embraced the good and the bad in his country’s history. It was not quite “my country, right or wrong,” but his nationalism was never diminished by his country’s imperfections and failings.

As president of France in the late 1950s and 1960s, de Gaulle ended the divisive war in Algeria, developed a French independent nuclear deterrent, pulled France out of NATO’s military structure, and established a special relationship with its former enemy Germany to enhance France’s power and prestige in Europe. He always, always, put France first.

America’s current ruling class lacks the nationalism that underpinned de Gaulle’s every move as France’s leader in times of war and peace. We are governed by globalists, not American nationalists. Indeed, the Biden administration has labeled American nationalists as the greatest threat to our democracy. The notion of “America First” has been ridiculed and demonized by our globalist ruling class in both political parties, not just because of its association with former President Trump, but because it connotes an intense nationalism that is anathema to the globalist agenda of open borders, climate change, multilateralism in foreign policy, and cultural wokeism. De Gaulle would have been astounded, for example, at President Jimmy Carter’s human rights-centered foreign policy, President Barack Obama’s apology tour, and Secretary of State Antony Blinken’s confession of America’s sins at a joint press conference with Chinese diplomats early in the Biden administration.

De Gaulle would have been equally astounded at the attempt to erase or transform American history by taking down statues of historical figures or removing George Washington’s and Abraham Lincoln’s names from schools. Washington and Lincoln, by the way, were as intensely nationalistic as de Gaulle.

America faces a divided populace at home and dangerous adversaries abroad. Now, more than ever, we need a leader like de Gaulle — a leader who will always, always put America first.

Image: This file is licensed under the Creative Commons Attribution-Share Alike 3.0 Germany license.