Another Perspective,Top Story Catholic Bishops,Easter,Good Friday,Holy Week We Are a Good Friday People - The American Spectator | USA News and Politics
Menu
Another Perspective
We Are a Good Friday People
A response to a letter to Catholic bishops to reopen churches for Easter.
by Jeremy Lott
Woman praying outside the Vatican on March 15, 2020, after its closing for coronavirus (Souheila Soula/Shutterstock.com) 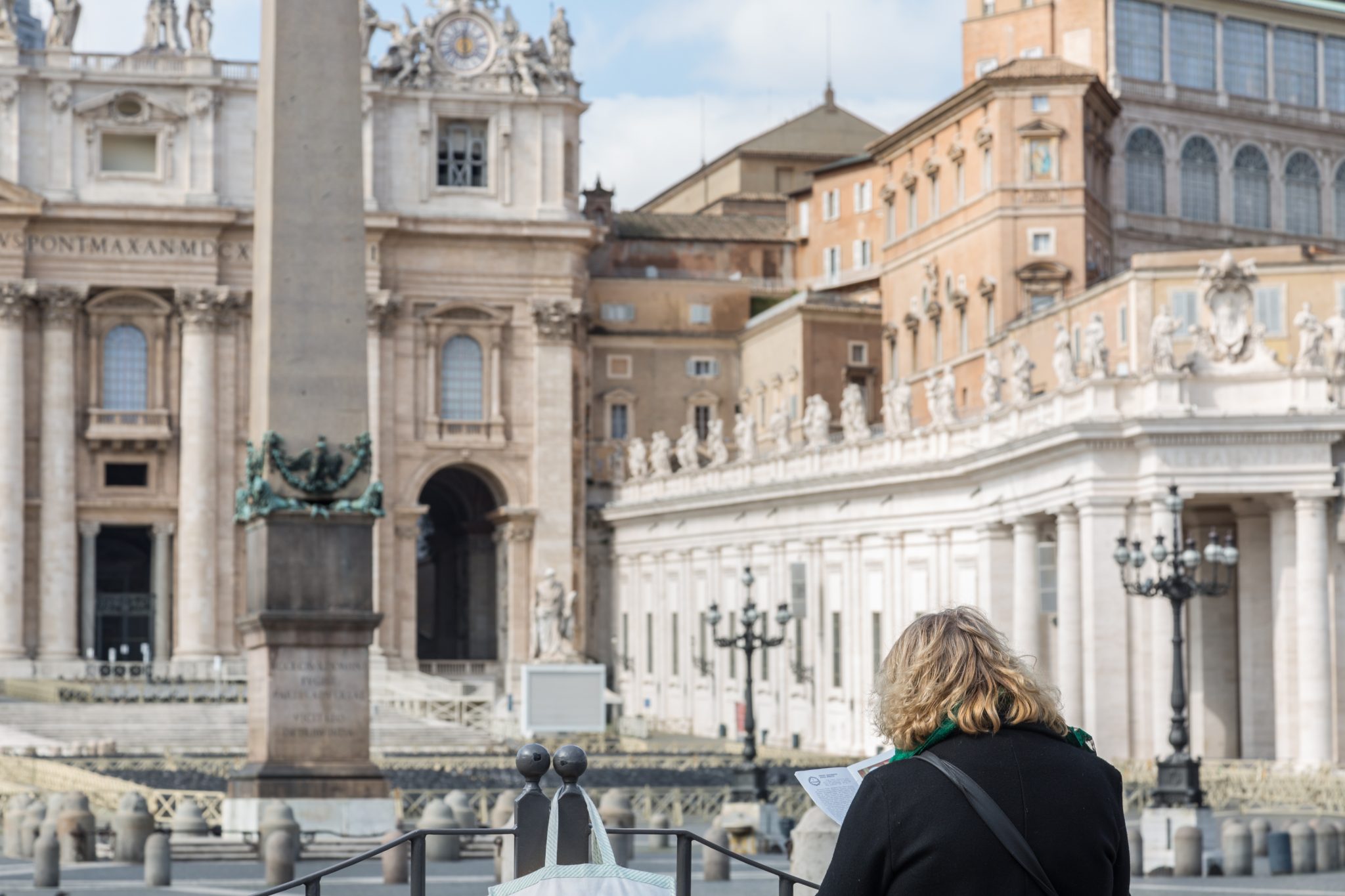 Good Friday is the day Christians commemorate the execution of Jesus the Christ by a particularly brutal means. It’s the reason we still have the cross as a widespread symbol, long after that method of capital punishment has been outlawed in most places.

Nietzsche’s declaration that God is dead was supposed to be shocking. But to the devout, it was a yawner. “Happens every year,” they might have told him, though the philosopher was not a great listener.

Imagine this: You were one of the people who accompanied Jesus about 2,000 years ago. He spoke in strange and compelling ways. His words were accompanied by actions that thrilled and puzzled you.

Loaves and fish seemingly multiplied right in front of your eyes. A crippled man got up and walked away. The blind were given sight, and saw men as trees walking. A fig tree that got on his bad side simply withered. Pigs stampeded to a watery death. Jesus yelled at an old friend to come out of his tomb. The dead man came out, covered in burial cloths.

These things were impossible. How was he doing them? You wanted to know, and so you walked with him on his journeys. The more you saw, the more you became convinced that he was a man, yes, but also more than a man. Religion taught you that there was a vast distance between man and God, yet he seemed to bridge that gap.

If you were on that journey, then you went with Jesus to Jerusalem and witnessed the series of events that are typically depicted in churches this week, when churches are open: Palm Sunday for his entrance; Holy Thursday and Good Friday for his betrayal, rigged trial, brutal beating, crucifixion, and disturbing death. Christians believe that this was the week and the day that God died.

There is an open letter and petition to American Catholic bishops by devout Catholics circulating on the Internet called “We Are an Easter People.” It has been signed by over 25,000 people at press time.

The meat of it reads,

Bishops, we your faithful flock, implore you to do everything you can to make the sacraments more available to us during this crisis. Something is terribly wrong with a culture that allows abortion clinics and liquor stores to remain open but shuts down places of worship. While safety and cooperation with civil authorities is necessary, we must do everything we can to have access to what is essential for our spiritual lives. We should certainly not voluntarily deprive ourselves of the sacraments.

After the request follow nine suggestions for how to keep churches going in a limited way that is consistent with not infecting people. The most relevant of these is that the bishops “Do everything you can to make possible some form of a public Mass, especially the Easter liturgy, and then encourage pastors to conduct it.”

As a part owner of a liquor store, I have to question the gratuitous shot of this letter, lumping us in with abortion clinics. One of Jesus’ recorded miracles was turning water into a tasty alcoholic beverage.

But there are other, better objections to the open letter, and the venerable Catholic newspaper Our Sunday Visitor makes them. “While this clearly is a cri de coeur from those who, like we, desperately miss the sacraments during this time of global crisis, we strongly believe that much of what the message advocates is ill advised and, worse, could cause great harm,” the editors write.

Our Sunday Visitor admits that the Catholic Church ought to be doing some things differently in this crisis. Particularly, it ought to make the sacrament of the Anointing of the Sick more widely available, now that so many are sick and dying. Yet the paper argues that churches should remain closed to public gatherings and that we should not have any usually packed-to-the-rafters Easter Masses this year, where many people who gave Good Friday a pass crowd in to celebrate Jesus’s surprise return.

I agree, of course, but there’s a wrinkle. “[A]s an Easter people,” Our Sunday Visitor assures, “we know that Christ is still among us, as he promised.” There is one day when that is far from clear. When everything is muddled. When hope hangs by a thread, if that. You see, we are a Good Friday people, too.

Jeremy Lott is a bad Catholic in good standing.