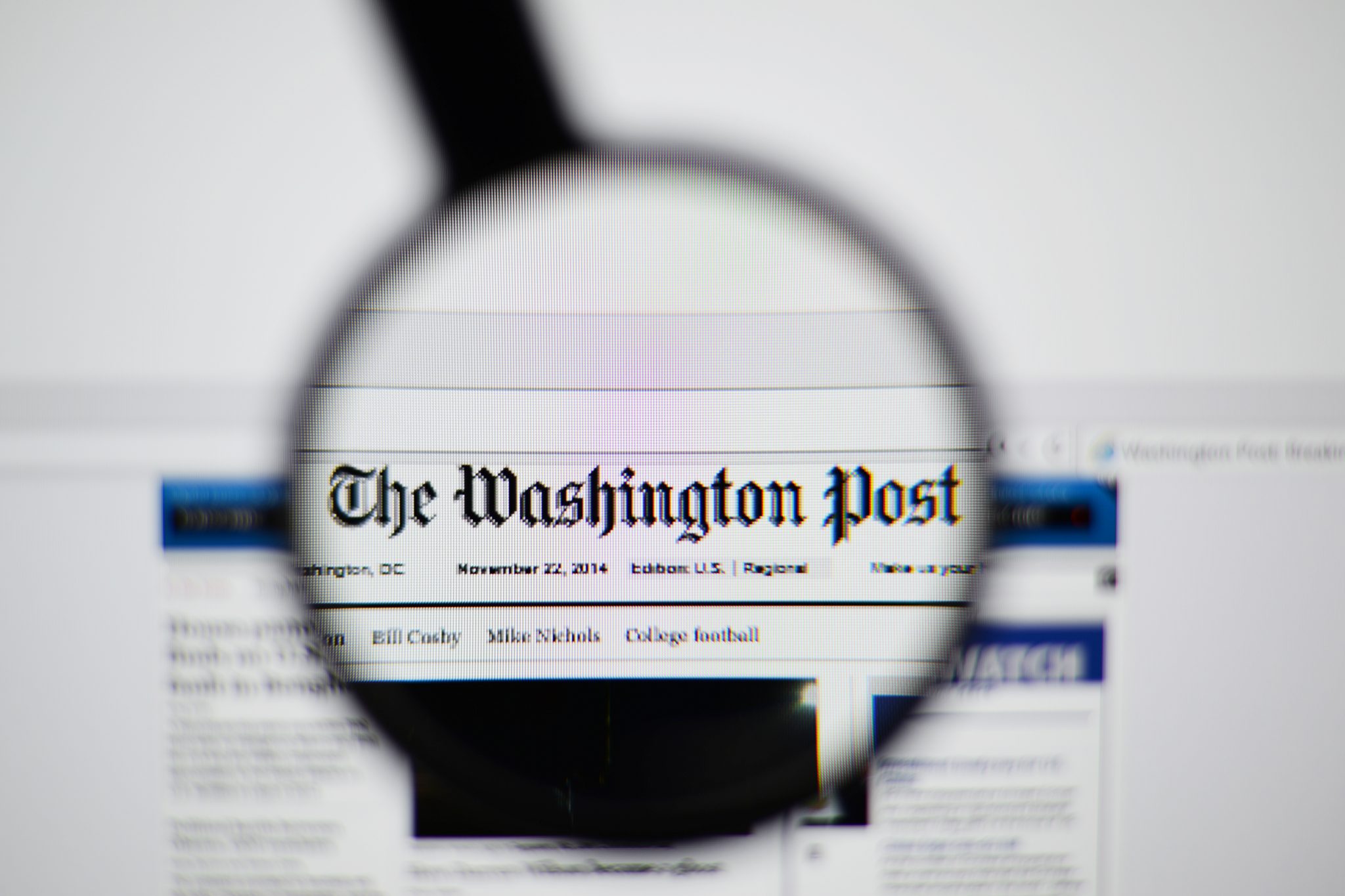 So over there at the Washington Post, a wizard of the liberal media elites named Matt Negrin, described as “a former journalist and TV news producer,” has headlined this:

A political litmus test for Republicans: Fail it, lose your TV slot
Time for a rapid test for the voter fraud delusion

Almost a month has passed since Joe Biden won the election, and the Republican Party still refuses to acknowledge him as president-elect. With hardly any exceptions, Republicans in Congress support President Trump’s lie that imaginary voter fraud stole the election from him.
Unfortunately, there is no vaccine for this delusion. But journalists in the news business do have the power to stop the spread of this dangerous disinformation by quarantining this conspiracy theory to where it belongs — Fox News, Newsmax and One America News — rather than allowing it to infect viewers of real news outlets.

The real delusion here is Negrin’s. And in truth, this is yet another example of “journalism” that is complicit in a head-on attack on democracy and a free press.

In fact, there are examples aplenty out there of voting irregularities and potential outright fraud. To say otherwise is, to borrow Negrin’s quote, a “lie.” It is, to borrow from Negrin again, “the job of real journalists in the news business”  “to stop the spread of this dangerous disinformation.”

Take a visit to the website Here Is The Evidence — which lists hundreds of sourced stories about voter fraud. Or pay attention to the multitude of witnesses testifying live and in person to voter fraud at all of these state legislative hearings. Or read the affidavits and/or testimony of the various cyber security experts who have discussed in detail the specifics of the fraud they suspect based on their research.

As noted here at Fox, pollster Patrick Basham went on Mark Levin’s Life, Liberty and Levin show to thoroughly detail how the Biden results are “not statistically impossible, but it’s statistically implausible.”

Even just watching the television images of the counting in Philadelphia or in Georgia, one can easily see the effort to keep observers from doing their job by requiring them to watch from behind barriers six feet distant (Philadelphia), or waiting until they were all sent home before trundling out bundles of ballots from underneath draped tables (Georgia).

In fact, the video of the Georgia ballots coming out from underneath a table after poll workers were sent home has not — say again has not — been convincingly debunked, as the media claims. Over at the Federalist, Mollie Hemingway headlined this:

No, The Georgia Vote-Counting Video Was Not ‘Debunked.’ Not Even Close
A Big Tech-backed ‘fact’ ‘checking’ outfit claimed to debunk explosive evidence for Republicans’ claims of significant election problems in Georgia. It didn’t.

In a perfect example of the Liberal Media tie with Big Tech, I posted Mollie’s very detailed story on Facebook. Facebook immediately posted this on my posting: “Partly False Information. Checked by independent fact-checkers. See why.”

Follow along and one gets to the very same website that Hemingway wrote about, The Lead. Its story crazily contradicts itself.

The Lead said the affidavit of poll observer Mitchell Harrison does “not include the claim that they were told to leave before ballot scanning ended.” Yet one reads the actual affidavit and quite clearly it says that a supervisor “yelled” to the election workers who were prepping ballots for scanning to “stop working” and return the next morning. That’s a direct contradiction of The Lead’s own headline, which said:

Fact Check: GOP Observers Did NOT Swear In Affidavits They Were Told To Leave Fulton County, Georgia, Vote Count Center On Election Night

Which is to say, Facebook labels Hemingway’s story “Partly False,” when in fact it is The Lead whose reporting was “Partly False.”

And by the way? Hemingway also notes this:

Lead Stories claims it is funded by Facebook, Google, and ByteDance. The latter is the Beijing-based and China Communist Party-linked company known for TikTok. Facebook and Google have suppressed journalism deemed harmful to Trump’s 2020 election opponent Joe Biden. The Trump administration has said TikTok’s ties to the Chinese Communist government makes it a national security threat.

The hard fact here is that the media’s repeated claim that charges that there was voter fraud are “baseless” — and stories like this blatantly untrue Negrin story in the Post — will not make voter fraud go away. And they will not intimidate into silence those who have stepped up to make the charges in public.

Whenever Republicans appear on a news show, the first question to them must be: “Do you acknowledge that Biden won the election and that he is president-elect?” If the Republican politician doesn’t say yes, they’ve failed the test and are at risk of spreading disinformation. The host of the show has an obligation to viewers to stop the interview there and say goodbye.
If an interview subject is willing to lie about a fact so plainly obvious and integral to American democracy — “the election is real and it happened” — we have to assume they’re willing to lie about anything. Real news outlets don’t interview flat-earthers or Sandy Hook truthers like Alex Jones for this very reason: Platforming conspiracy theorists is dangerous and offering them airtime validates their beliefs. Why aren’t TV news networks applying the same approach to the Republican Party’s election truthers?

This is an appeal for silencing investigative journalism.

Negrin is not just a denier on Electiongate, he is a fact denier on Obamagate. He writes in this same piece that it is a “conspiracy theory” to say “that the Obama administration was ‘spying’ on the Trump campaign.”

Hello? Earth to Negrin? Perhaps he should read — the Washington Post, where this headline was produced mere days ago:

U.S. seeks up to 6 months of prison time for ex-FBI lawyer who pleaded guilty to altering email in Russia probe

The very first paragraph of this story says this, bold print supplied for emphasis:

U.S. prosecutors Thursday called for a prison term of up to six months for a former FBI lawyer who altered an email the bureau relied on to seek court authorization to surveil former Trump campaign adviser Carter Page during the investigation of Russian interference in the 2016 election.

Got that? According to the Washington Post, Kevin Clinesmith, a member of the Obama-run Department of Justice, was involved with altering an email that the Obama-run Department of Justice was using in obtaining “court authorization to surveil former Trump campaign adviser Carter Page during the investigation of Russian interference in the 2016 election.”

Surveil. That would be a synonym for “spying.” Which is exactly what the Obama administration was doing to the Trump campaign. And Special Counsel John Durham, who nailed Clinsesmith, is still investigating.

The story begins — and again, bold print supplied for emphasis:

Former Trump campaign associate Carter Page filed a $75 million federal lawsuit against the Department of Justice and the FBI in Washington on Friday.
The lawsuit seeks relief for “multiple violations” of Page’s Constitutional and other legal rights in connection with unlawful surveillance and investigation of him by the United States Government.

Unlawful surveillance. Spying. Spying of the 2016 Trump campaign. By the Obama-run Department of Justice and FBI.

There is a reason why millions of Americans watch “Fox News, Newsmax and OAN” — Negrin’s targets. It is because they will not be silenced or shimmy around investigating the truth about voter fraud.

They are not Electiongate deniers or Obamagate deniers. They are are truth seekers.

Finding out the truth, alas, is something the liberal media of today sadly refuse to do. They are complicit in a shameful attack on the integrity of the American election system.