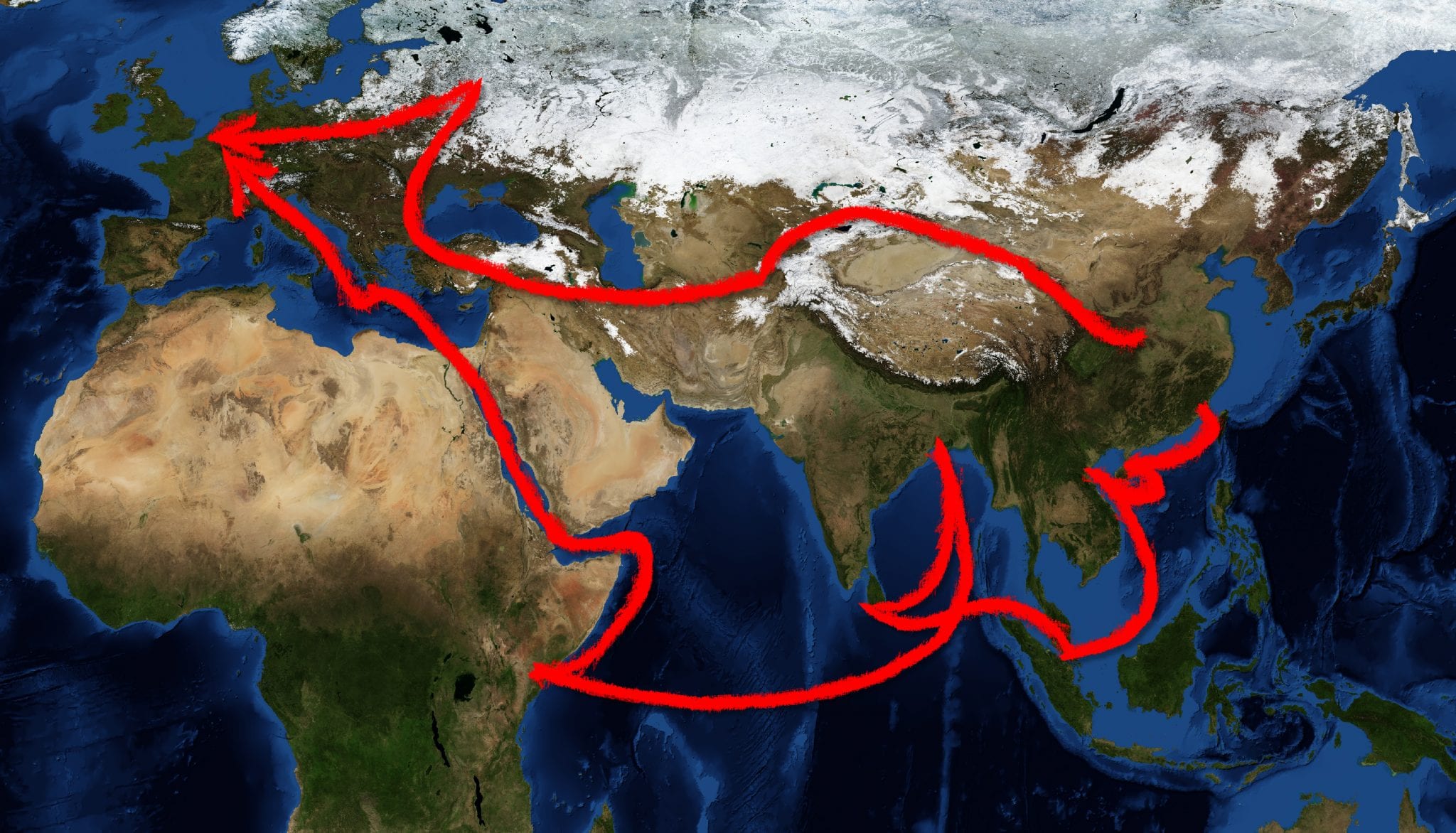 While Washington’s experts and pundits continue taking Moscow’s pivot to Beijing with a grain of salt, China and Russia announced yet another joint mega-project that will help to accelerate the formation of what many dubbed the “Eurasian supercontinent.” From an American perspective, long historical grievances, border wars, and overwhelming mistrust between the two Eurasian powers are seen as permanent factors that will inevitably downgrade the Kremlin’s alignment with China’s Communist Party. Granted, Russia’s quasi-alliance with China has become a double-edged sword. On one hand, the Kremlin uses Beijing to balance against the United States and Japan; hence the sale of sophisticated stealth fighters including the SU-35 jets and state-of-the-art Kilo–class submarines to China. On the other hand, Russians have compromised their influence in Central Asia by essentially granting Beijing unlimited access to the region’s resources, allowing China to gain a strategic foothold in an area central to China’s own security. Add to this China’s ingenious reverse-engineering, which targets Russian military technology and its burgeoning economic clout in Russia’s Far East.

Nonetheless, many American commentators fail to acknowledge that both Russia and China have not forgotten the strategic leverage that their conflict produced for the United States during the Cold War. As such, neither Moscow nor Beijing is willing to hand Washington another bargaining chip to maneuver within this geopolitical triangle. For too long, Americans have focused only on the difficulties of Moscow-Beijing relations while largely neglecting the incentives that have brought these two powers together. In short, there may not be another “Sino-Soviet split” in coming decades for Washington to exploit.

Apart from subscribing to China’s 5G network, Russians are positioning themselves as the connecting bridge between China and Europe. The recent announcement of the trans-continental route — the Meridian highway — seeks to accomplish exactly that. This will be a major contribution to China’s Belt and Road Initiative (BRI), since the Russian part of the highway begins at the border with Kazakhstan and ends in Belarus, creating a shorter route between the Middle Kingdom and the Old World. The idea for the highway belongs to the former deputy chairman of Gazprom Alexander Ryazanov, who believes that the project will cost roughly $9 billion and take around 14 years to start generating a profit.

As Russia’s RBC Group reports, the Meridian will be a four-lane toll highway consistent with European standards, with a starting point in the Orenburg region near Kazakhstan. Already approved by Russian Prime Minister Dmitry Medvedev, the 2,000-km highway is the brainchild of the “Russian Holding Company,” and, according to Vzglyad, the company has acquired 80 percent of the corridor where the route is set to be built. Although this is a private initiative, Russian government agencies such as the Ministry of Finance and the Ministry of Economic Development will assist the company to find additional investors.

Russia’s involvement in this motorway stretching from China all the way to Hamburg, Germany, is part of a greater development to which the United States didn’t pay much attention. In his book Belt and Road: Chinese World Order, Bruno Maçães describes the 2015 Putin-Xi statement that essentially attached the Russian-led Eurasian Economic Union to China’s BRI. Maçães claims that it was anticipated from the get-go that Moscow would not tolerate Beijing’s advancement into Central Asia, and China was cautious not to do anything drastic. Moscow, however, ended up giving China the green light to enter Central Asia and Georgia, as well, for further expansion into Europe. Now Moscow is willing to bandwagon directly with China’s intercontinental ambitions.

Throughout the Cold War, American policymakers were adamant about preventing the emergence of a communist hegemon dominating the Eurasian landmass. This was one of the main concerns that brought Paul Nitze into the State Department; he consequently wrote one of the most important Cold War policy papers, the NSC-68. The Americans knew that if Eurasia were to be dominated by a single power or a coalition of powers, the power balance would inevitably be exported into the Western hemisphere, something that all American statesmen had vehemently opposed since the birth of the Republic. Through vigorous diplomacy and bipartisan consensus, the United States was able to turn containment into one of the most successful American foreign-policy strategies.

True, Russia is not a communist state anymore, and China values its bilateral relationship with Washington much more than it does with the Kremlin. As former national security adviser Zbigniew Brzezinski liked to caution, however, the U.S. should avoid a formation of a “grand coalition” between Moscow and Beijing “united not by ideology but by complementary grievances.”

This is the scenario unfolding before our eyes today. It is ironic, notes historian Stephen Kotkin, that while Moscow refused to become America’s junior partner in post-Cold War era, it is becoming that of China.

The United States doesn’t have a Russia policy. Its domestic political market is consumed by Russia’s 2016 election-meddling, which gave birth to the “Donald-Trump-the-spy” conspiracy. No meaningful engagement, therefore, has been possible between the two nations.

The result is a two-front Cold War-like situation with China and Russia: the former being led by the Trump administration, and the latter by the Democratic Party. While Russia may not be the determining factor in America’s strategy vis-à-vis the rising Asian powerhouse, Moscow has the capacity to alleviate some of China’s strategic challenges.

As Beijing continues its bold plan of building a blue-water navy, it is simultaneously building railways and roads across Eurasia. Even though it is practically impossible to compete against the maritime trade, China hopes to mitigate its vulnerability on the seas — where it sees American and Japanese navies as formidable rivals — through continental expansion. This is where Russia comes in handy.

By linking China and Europe, Russia helps Beijing to deviate part of its trade from the maritime zone to the continent. Most importantly, increased Chinese trade in and around Central Asia will enable the final stage of China’s border consolidation: the isolation of separatist regions such as Xinjiang from outside political support.

The long-term challenge that the U.S. should address is decreasing China’s socioeconomic influence over Russia. Just as geopolitical analyst Brandon Weichert warns, China’s subtle “subordination of Russia” may turn Beijing into an even more hardline competitor that could force the U.S. to accommodate the Chinese global influence.

Should Beijing’s pan-Eurasian vision become reality, the United States will face a situation never seen before. And as countries such as India continue resisting China’s expansion while demonstrating extraordinary cautiousness, Russia seems to be sliding into Beijing’s orbit.

This is what should worry Americans in the long run: a China-dominated Eurasia connected with ports, railways, and roads stretching from the remote corners of Asia to Western Europe.

Erik Khzmalyan is a geopolitical analyst specializing in U.S. foreign policy, national security, and strategy. Mr. Khzmalyan holds an M.A. in Statecraft and National Security Affairs from The Institute of World Politics in Washington, D.C.