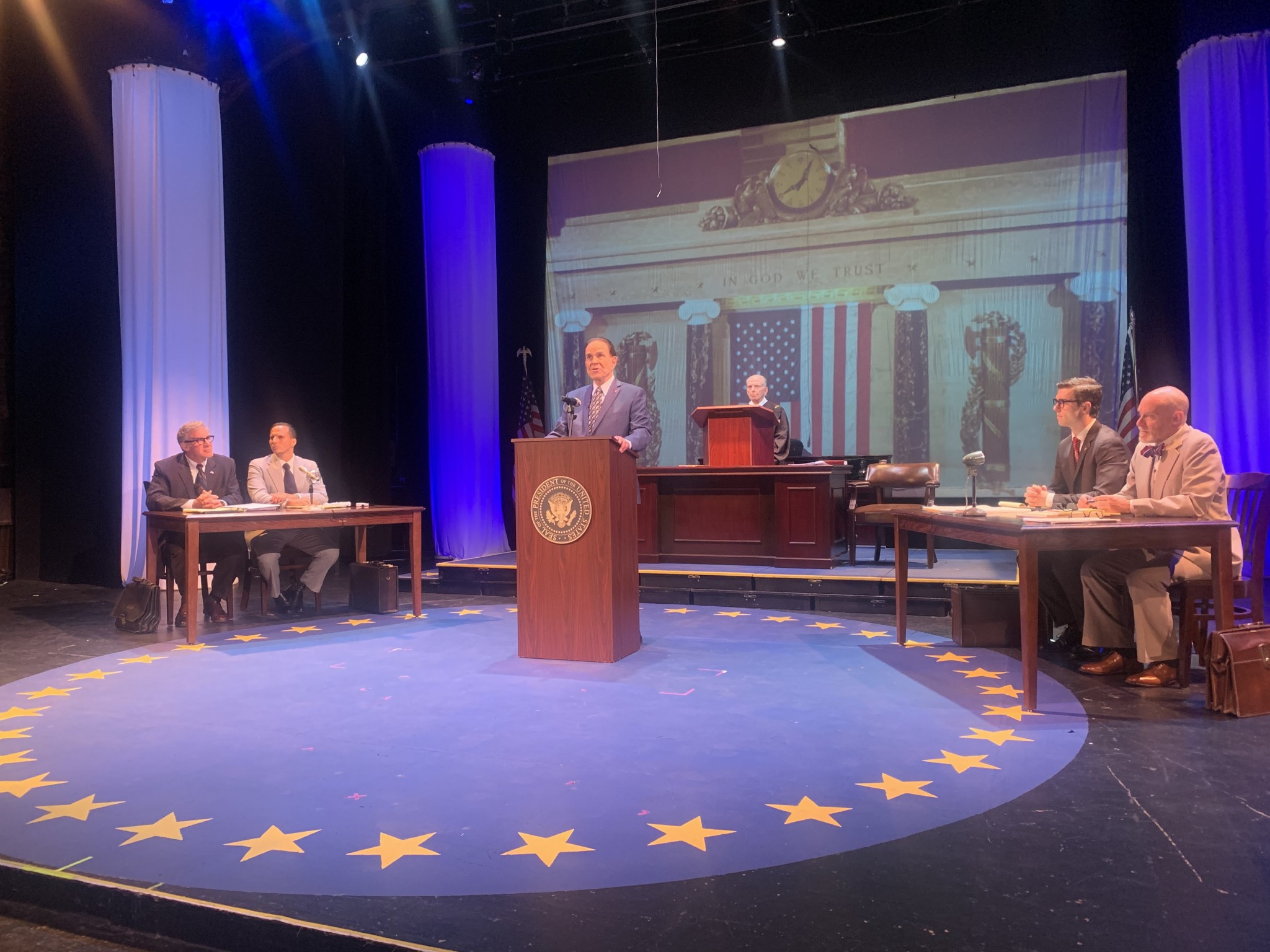 Was Richard Nixon driven from office by a conspiracy of prosecutors, judges, Democratic congressmen, and the media for crimes he didn’t commit?

An off-Broadway play that premiered over the weekend, Trial on the Potomac, uses historical documents to consider whether Nixon is innocent of covering up the break-in at the Democratic National Committee headquarters.

At the play’s opening, Rich Little, the actor, comedian and impressionist, who uncannily plays Nixon, gives a speech that his Democratic opponents expect to be his resignation speech. A young Ted Kennedy joyously downs whiskey as he watches the address on TV, anticipating that this will be the end to the Republican president. But something shocking happens: Nixon doesn’t resign. He declares his innocence and announces he will fight the accusations.

That sets up a hypothetical impeachment trial that posits the audience as the Senate. And in this trial, actual documents that have been uncovered in recent years are used to dispute the conventional wisdom that Nixon is a guilty man. Nixon’s defense counsel uses the documents to attempt to prove that Nixon’s opponents schemed to force him out of office.

It’s a political fantasy of lawyers who boldly reveal mountains of evidence that show Nixon is facing a Democratic conspiracy and a Nixon who vigorously defends himself. Little’s Nixon is not like the real Nixon who left office quickly when his support in the Republican Party collapsed. He is instead defiant to his last breath.

“But did I try to obstruct the investigation?” Nixon asks in the play. “Absolutely not.”

The Nixon in the play also stands up for his record as president, and launches into a soliloquy about all he has done for the country:

I passed the Clean Air and Clean Water Act. I created the EPA. . . . I brought more women to work in government than ever before. I created OSHA, desegregated the schools in the south, and ended the military draft. By the time I was ready to run for reelection, we had detente with Russia, we had an opening with China, I could go on.

Nixon gives an explanation for the accusations he faces: the establishment Democrats were exhausted by Nixon’s success and wanted to bring him down. “I think back to how ticked off the Democrats were,” Nixon says. “They were used to winning . . . then I came in and shut the whole damn thing up. And they weren’t used to that.”

The play is framed by a young Diane Sawyer, played by Kelsey Lea Jones, who broadcasts the latest developments live on CBS News. It’s also told through the eyes of an eager young defense lawyer for Nixon named Geoff Shepard who is freshly graduated from Harvard Law, desperate to impress, and certain that the evidence is on Nixon’s side. Shepard is played by Nick Mauldin, whose lively presence — and humorous relationship with the elder lawyer also defending Nixon — ensures the legal play remains captivating.

And the end of the “impeachment trial,” the audience serving as the Senate voted. Overwhelmingly, the audience said that Nixon was not guilty.

Frank Luntz, the pollster known for his focus groups, spoke with the audience after the play.

Another concluded that “Watergate is nothing” compared to today. A woman agreed, and said that Watergate today would have been just “another small scandal.”

Another woman looked back at her own mindset during Watergate and concluded that she hated Nixon’s guts at the time because “the media just twisted everything.”

The historical documents used in the play to dispute the conventional narrative on Watergate come from the real Geoff Shepard, who was in fact the deputy counsel on Nixon’s Watergate defense team. Shepard has published two books that proffer this alternative view on Watergate: The Real Watergate Scandal (2015) and The Secret Plot to Make Ted Kennedy President (2008), which are the inspiration for the play.

Shepard’s documents show that four prosecutors privately met with two Watergate judges; a special prosecutor complained that the prosecutors were determined to get Nixon “at all cost”; there was an implied quid pro quo between a special prosecutor and Judge Sirica: the prosecutors would bring the indictments in time for Sirica to name himself to preside at trial, and Sirica would allow them to present secret grand jury evidence to Congress; and White House Counsel John Dean admitted that the “smoking gun” tape was misunderstood.