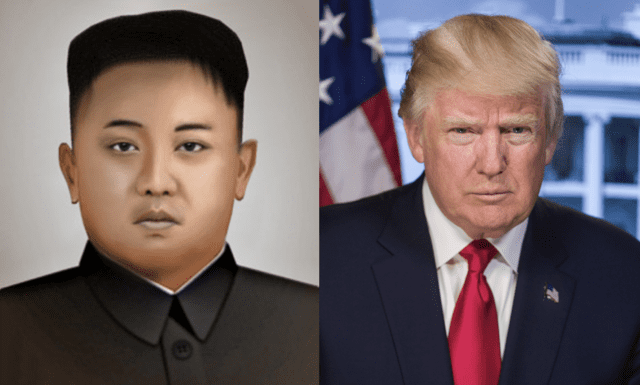 “Bomb the hell out of ISIS. Another promise kept.”

Green Beret Mark de Alencar, 37, had a wife and five children. Freedom fighter Alencar, of blessed memory, died from combat wounds sustained in Nangarha Province in eastern Afghanistan. Five days later the U.S. dropped the so-called “mother of all bombs” on an ISIS underground complex in the province’s Anchin district. (More about this below.)

The prior week this happened: two days after Syria’s Assad used chemical weapons, the United States bombed the operative base. To paraphrase the great sociologist Edward Banfield, low-class thugs like Assad require immediacy.

And also: a few days after North Korea’s Kim Jong-un threatened the U.S. with nuclear attack, the Carl Vinson Carrier Strike Group began moving toward Korea and is now within striking distance. Its import encourages beleaguered Japan, which now, under this president, has skin (and yen) in the game.

With Kim Jong-un, metaphors and actuality are indistinguishable. The manic Kim now threatens the extinction of Los Angeles and San Francisco. In November, Donald Trump lost California decisively, but he cares, even about Berkeley. Thus, our flexed naval power adds to the regional air capability, notably in Japan and in Guam.

For decades, the U.S.-Korean joint command daily reviews the weather and prepares for a possible attack. Vincent K. Brooks, the four-star general commanding U.S. forces in Korea, has progressed with South Korean generals who historically resented U.S. leadership. But the growing young Korean population belittles the threat from the North. Vince’s father was a general, and so was his brother, and Vince long ago served in Korea right after West Point. If there is trouble, Vince Brooks is the right man at the right time. Based on my conversations with Vince more than a decade ago when he first became a general, it is unlikely that he voted for Trump. But he must be gratified that an American president has his back.

An American pre-emptive strike, even limited, is unlikely, for now, not just because of North Korea’s failed missile test this weekend (the failure North Koreans will never know about), or because Vice President Mike Pence is in Seoul. The stakes are high: an irrational Kim could react with a massive artillery attack on, and an invasion with his expendable infantry of, the populous Seoul.

Americans are in harm’s way in Korea. And in Syria, there is risk of a quagmire if bleeding-heart politicians overrule our military wise men. Yet, consider this: that Tomahawk attack while the Chinese premier dined with Trump may indirectly enable Trump to play the “China card”: isolate Kim into reality. Hopefully. Otherwise, at some future time, President Trump will deprecate North Korea’s nuclear capability, but not as an isolated military action. Kim may not back down, but the Chinese will not support him. And the backing for Kim among the deprived and starving people, based on the fear and paranoia he promotes, can crumble.

And ISIS? The C130 Hercules transport is for troops, wounded, and equipment. But pushed down the back ramp went the 21-thousand pound BU-43B. Detractors derided the massive bomb as a costly precedent to kill some ISIS fighters. They are wrong. It will not only disable the infrastructure but also make any survivors wish they were dead. Trump delegated authority to “the generals” — who acting on their intelligence selected the prime weaponry. The days of a kibitzer president tying the hands of the military are gone. The demoralizing message to ISIS: there is no sanctuary, even deep underground. Still (message to Donald Trump, Jr.), you cannot bomb ISIS out of existence.

Will Kim Jong-un’s generals tell him what the big bomb means? His command bunkers are not invulnerable, and he is a marked man.

Bad Guys test, while other Bad Guys watch, the new administration. Kim is provoking; he wants to be bribed with economic aid and food; it would be a mistake to again salvage his regime, or even to negotiate with him. He is a high stakes extortionist. The most expedient course, for now, is to poison the SOB and perhaps his entourage, and then cut a deal with the remaining war criminals who abetted the regime to de-nuke the nation. This is serious stuff, not the business of tweets.

This is a time for resolve, but not miscalculation. Strength does not necessarily require intervention. In these matters of war, whether in Syria, Korea, or Afghanistan, a member of the president’s family should not tweet, other than simply to support our men and women in danger. Cavalier tweeting seems disrespectful and sets an unsustainable precedent. Donald Trump, Jr. is correct in what he said, but he should stay out of it.

This discussion raises a broader issue. Not just Jim Mattis at the Pentagon, or Rex Tillerson at State, but all cabinet members have responsibility and require commensurate authority… for clout. There is a morale problem in high and adjacent places. Whatever the reality, the perception is that Trump family members can reverse policy, even abruptly, as well place cronies in jobs or veto important appointments. Hundreds of key sub-cabinet and similar positions remain unfilled, many occupied by Obama holdovers hostile to Trump. The Administration must place the best people quickly, and they must be confident that their task is to be effective, not curry favor with friends and family of the president.

Generally, infighting in the White House is habitual, nonetheless pernicious. Rather than engage in simplistic factionalism or play the blame game, here is what we know, very briefly:

President Donald Trump: He had “great confidence” in Gen. Mike Flynn just before firing him. Recently he minimized the momentous role of Steve Bannon as “just a guy who works for me.” Mr. President, consider this approach: henceforth, say nothing about your top people, and punish the leakers who disparage their colleagues.

Gary Cohn: He knows economic policy but is outside his comfort zone in government and politics, where he now must challenge, not enable, crony capitalism. He is a highly competent and focused executive, but his ascendancy raises the question: In a nation this large, why does each administration put Goldman Sachs alumni at the top?

Steve Bannon: He is a recovering and rehabilitated Goldman alumnus who remains the symbol and practitioner of Trump’s populist conservatism. His National Security Council appointment was over-reach, and he should then have recused himself to avoid the inevitable putdown. But don’t make Bannon the Fall Guy for assorted problems. He may be disheveled, but remember it’s the manicured guys in the Brooks Brothers suits who ill served President Ronald Reagan.

Sean Spicer: Given the peculiarities of this president, Spicer has the most difficult job in Washington. Don’t blame Spicer when others in the Administration privately, or even publicly, explicate policy to the media, and he has to pick up the pieces. There should only be one spokesman — Spicer. He is a competent, honest, decent (and now exhausted) man who now complicates his life. He should stop talking after making the sale. In deposition mode, he would avoid egregious blunders that allow the malicious to proclaim nonexistent character flaws.

Jared Kushner: He has the president’s ear and, as the ubiquitous son-in-law, he cannot be fired, but he can be blamed. Best now that he limit his portfolio and profile, and pick his battles. Their liberal friends will embrace Jared and Ivanka, but these ideologues will never embrace the president. Instead, Jared Kushner should meet with the conservative sages on policy, learn from them and make them allies. He will need them sooner than he thinks.