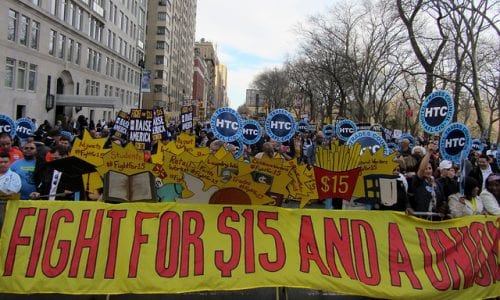 The left was quick to give Sen. Bernie Sanders credit for Amazon’s wage hikes the company announced Tuesday, but more credit belongs with President Trump and the strong economy he has helped create.

Amazon will begin paying all American employees at least $15 an hour beginning in November. About 250,000 full-time, part-time and temporary employees and 100,000 seasonal employees will benefit from the minimum wage hike. The company said it would also push for a federal minimum wage increase.

“We listened to our critics, thought hard about what we wanted to do, and decided we want to lead,” Amazon founder and CEO Jeff Bezos said in a statement. “We’re excited about this change and encourage our competitors and other large employers to join us.”

In September, Sanders introduced what he called the Bezos Act, which would implement a tax to companies for every dollar their workers received in food stamps or taxpayer-funded health-care benefits.  Sanders had heavily criticized Amazon for what he called low wages.

“Today I want to give credit where credit is due,” Sanders said after Amazon’s announcement. “What Mr. Bezos has done today is not only enormously important for Amazon’s hundreds of thousands of employees, it could well be, and I think it will be, a shot heard around the world.”

Sanders would never do it, but plenty of credit should be given to Trump, whose work to reduce regulations and taxes has strengthened the economy and led to plenty of announcements similar to Amazon’s.

CNBC pointed out that hiring for the holiday shopping season will be tougher this year for retailers because the unemployment rate is at “a generational low” of 3.9 percent. Under Trump’s presidency people are working.

Yet the left lavished praise all over Sanders on Tuesday.

“Thanks to ALL FELLOW PROGRESSIVES led by Sen. Bernie Sanders who are making the national campaign for a livable working wage a reality,” read a Facebook post of one of my leftist friends after the announcement.

As expected, the discussion in the threads below drifted into the “Fight for Fifteen” territory, that push by unions attempting to mandate a $15-an-hour federal minimum wage. And that’s when things just got loony.

A retiree named Carol (I’ll just list first names here since the discussion wasn’t created for consumption on a national news outlet) wrote about owning and operating two escape rooms in a metropolitan area of 300,000 residents in which 90 percent of her revenue is generated on the weekend. So she uses primarily college-aged, part-time employees and pays them $10 to $12 an hour.

The area mandates just the federal minimum wage of $7.25 per hour and other workers in the same age range might find jobs at burger joints paying $9 per hour.

“College kids living at home or with roommates won’t find $15 per hour jobs that will be flexible enough to work with their education,” Carol wrote.

“If I had to pay them all $15 per hour plus the 15-20 percent I must contribute to their taxes and workman’s comp I couldn’t stay open,” she added.

Carol said she keeps less than $25,000 per year profit for herself. Boosting that number is not as simple as increasing production of widgets: since Carol sells an experience instead of an inventory she’s limited by the number of hours she can entice people to visit her business — and jacking up admission prices to try to pay higher wages would probably result in a precipitous drop in revenue instead.

Those numbers weren’t good enough for some of the most liberal in the Facebook crowd.

Gail wrote that “I understand your problems and I may sound hard, but I believe if a business cannot pay a liveable wage it should not survive. You cannot expect people to work for $10 an hour just so you can stay open.”

If your jaws just dropped to the floor I’ll give you a moment.

OK, to summarize, we’ve just discussed a situation where the free market works perfectly: a small, very niche business that couldn’t afford to pay full-time employees instead employs part-time employees Friday through Sunday. Those employees, primarily kids in college, are happy to have the job. Rather than stand over a hot grill at McDonald’s all day to earn less, they can watch and guide people as they try to solve a series of riddles to escape a room. I’m sure most of them love it.

The left’s solution to the non-problem is to mandate minimum wages of $15 an hour, putting Carol out of business and leaving her employees without jobs.

It’s great to see big businesses like Amazon boost salaries for their employees, thanks largely to smart Trump administration economic practices that have improved the economy. The last thing we need to see on those coattails are mandating a massive minimum wage increase that could torpedo flourishing small businesses. It’s telling that in his statement, Bezos called on large employers to join him. He knows that forced pay of $15 an hour would have very adverse effects.