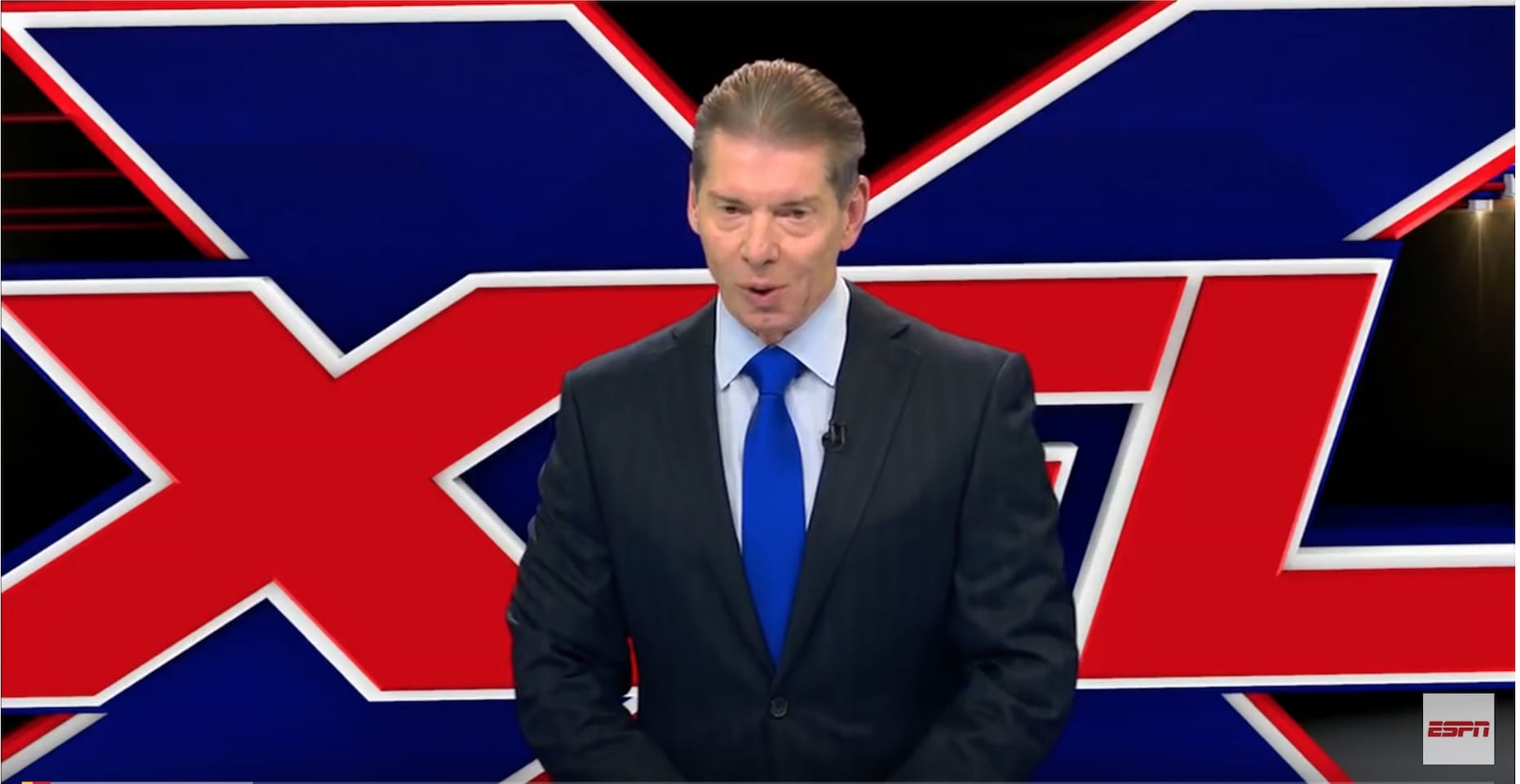 When Vince McMahon — that’s Mr. McMahon to you — speaks as the voice of reason, it is later than you think.

It may be that time for the NFL, whose ratings dropped 10 percent in 2017 after dropping eight percent the previous season.

The man who set Doink the Clown, Mantaur, and Papa Shango loose on the world announced on Thursday an XFL relaunch — and not a moment too soon.

For the uninitiated, or just plain forgetful, the XFL, a joint project by the WWE and NBC, played its one and only season in 2001. Its use of forward motion harkened back to the days of pre-NFL football. Innovations included a black-and-red ball, “He Hate Me”-esque monikers on the backs of jerseys, the absence of a fair catch, and a steal-the-bacon-style human coin toss. Those did not catch on. A franchise in Las Vegas and reviving quarterback Tommy Maddux’s career remain two of the very few ways the upstart influenced the old-school league.

This go-around, McMahon looks ready to correct the NFL’s mistakes than to make his own.

“People don’t want social and political issues coming into play when they are trying to be entertained,” McMahon explained at his press conference. “We want someone who wants to take a knee to do their version of that on their personal time.”

This comes from a man who once formed a “Mr. McMahon Kiss My Ass Club,” which, in the center of the ring, featured groveling employees doing just what the title describes. Roger Goodell formed a similar club, only it involved him groveling before disgruntled employees. In response to player-protestors kneeling for the national anthem, he incentivized the behavior so tarnishing the NFL shield by pledging $90 million for social justice causes.

“We are evaluating a player based on many things, including the quality of human being they are,” McMahon announced. “If you have any sort of criminal record or commit a crime you aren’t playing in this league.”

Fans, apparently, do not like to cheer for men who abuse their girlfriends or refuse to stand for “The Star Spangled Banner.” Duh.

Beyond a politics- and criminal-free league, McMahon wants to provide fans with a faster game by eliminating halftime and, presumably, abbreviating the play clock as he did during the XFL’s initial incarnation.

Vince McMahon governs the WWE with a fans-first mentality indicative of a third-generation carnival barker knowing that his prosperity depends on giving the people what they want. Roger Goodell, the son of a politician, runs rather than owns the NFL. Job preservation, not bottom-line numbers, serves as his highest value. So, rather than giving the people what they want he says what he thinks people want to hear.

The latter is a more respected man than the former. The former is a more successful man than the latter. One imagines that starting a football league, unlike presiding over one started in a Canton car dealership nearly a century ago, requires a nose for success rather than a craving for respect.

A man who built a business on giving the people what they want — including providing fans a human piñata in Colonel Mustafa during the Gulf War and female wrestlers such as Sunny, Sable, Ivory, Kelly Kelly, and others looking less like the Fabulous Moolah and more just plain fabulous — appears eager to apply this model to the gridiron.

Americans love football. They no longer love the NFL, at least as much as they once did. Vince McMahon, the victor of the Monday night wars that ended 17 years ago, need not win the Sunday afternoon wars that begin two years from now. He needs some of the NFL’s eyes.

The NFL generates about $14 billion a year in revenue. McMahon need not gobble up the whole pie, and leave Roger Goodell as battered as Eric Bischoff, to win this war. He just needs a small piece to justify his paltry $100 million investment.

The XFL, which looks to generate a chunk of its income through a cut of the sports book, leaves one pondering gambles, regarding which exist but two surefire pieces of advice.