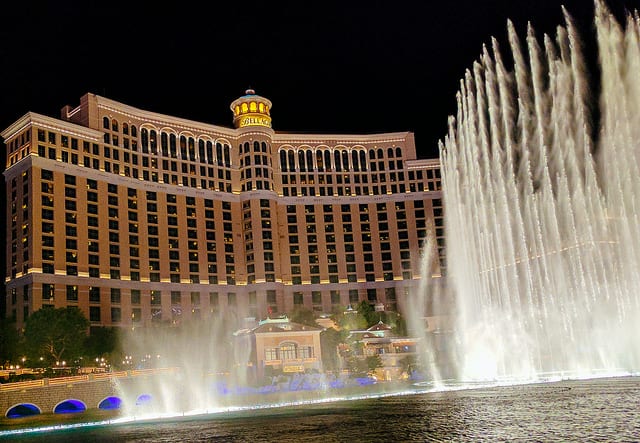 The greed of Sin City may have finally caught up to it.

Metrics are bad practically across the board: revenue per available hotel room, the most commonly used gauge of financial success, is down 4 percent; visitation is down 1 percent, room occupancy is also down 1 percent, convention attendance is down 3 percent.

The falling numbers come during a time when the American economy is booming, but that success hasn’t been parlayed in Vegas.

MGM cut its room rates to try to drum up business as it warned investors that the third quarter wouldn’t be particularly pretty in terms of dollars and cents. The company’s stock dropped to a 52-week low the first week of August.

David G. Schwartz, director of the Center for Gaming Research at the University of Nevada-Las Vegas, said “there are fears that Las Vegas has finally pushed its luck too far.”

At a time when casinos are now popping up in or around more places across the country, creating more competition for Las Vegas, casino operators in Sin City have been using what Schwartz calls “nickel and dime tactics” to try to suck every possible dollar out of their visitors.

The worst of the tactics is the resort fee, not only because it charges customers extra for services like the fitness center or local phone calls that most will never use, but also because the concept has spread like a virus across the country. (I paid a resort fee when staying in the Hamilton hotel in Washington, D.C. a few weeks ago and I have no idea for what services the charge was levied.) In Vegas, resort fees can now add as much as $40 per night to the cost of the room — and it’s not always obvious as you begin the booking process how much you’ll be charged. Vegas virgins often have no idea they’re about to get hit with a resort fee until just before they click agree for that first-time visit.

Now, Clark County has added another “tourist tax” by increasing lodging rates to pay for the $750 million public portion of the construction of Las Vegas Stadium. That additional tax is raising room rates an average of a couple of bucks per day to fund the largest public subsidy for stadium construction in history.

Nearly all casinos on the Strip started charging for parking in the past few years. It’s not the most unreasonable request, given that you pay for parking in just about every major city, and the Vegas rates were certainly reasonable (less than $20 per day, generally), but visitors had gotten used to the culture of free parking in Vegas. It’s possible to get free parking if you reach the second tier of the casino player reward cards at MGM and Caesars casinos, but, of course, that requires a lot of gamble. Those with a Nevada license park free, too.

The prevailing philosophy in Vegas for many decades was that the casinos would offer gamblers cheap food and rooms and make the money back at the tables and slots. Now, with more and more casinos publicly owned and answering to investors, they’re trying to show profits in every category possible. Those $2.99 steak and eggs specials are long gone, replaced by such things as Caesars Palace’s Bacchanal Buffet, where dinner costs more than $50 on the weekend.

Even the gambling has gotten tougher, as casinos now often pay 6-to-5 on a blackjack instead of the old standard of 3-to-2. They’ve experimented with roulette wheels with triple zeros because evidently an edge that starts at 5 percent in that game just isn’t enough.

Schwartz said these changes may have “eroded the value proposition of a Las Vegas vacation for many people who have loved visiting the city.”

As a free-market advocate, I applaud a country that allows Vegas casinos to implement these types of measures because in a true free market, customers have the ability to choose whether or not to pay for services. And there had already been some pushback before the recent financial calls occurred: The sister properties of Wynn and Encore announced in June they would allow visitors to park for free as long as they spend or gamble $50 inside those resorts (and trust me, $50 doesn’t go very far there).

Vegas may have finally pushed too far and it’s good to see the market react with its feet. While not likely to suffer the same fate as Atlantic City, which has seen a bigger revenue drop and the closure of several casinos with the increased competition from casinos in nearby cities, Vegas would be wise to implement more customer-friendly measures to counter the declining visitation.