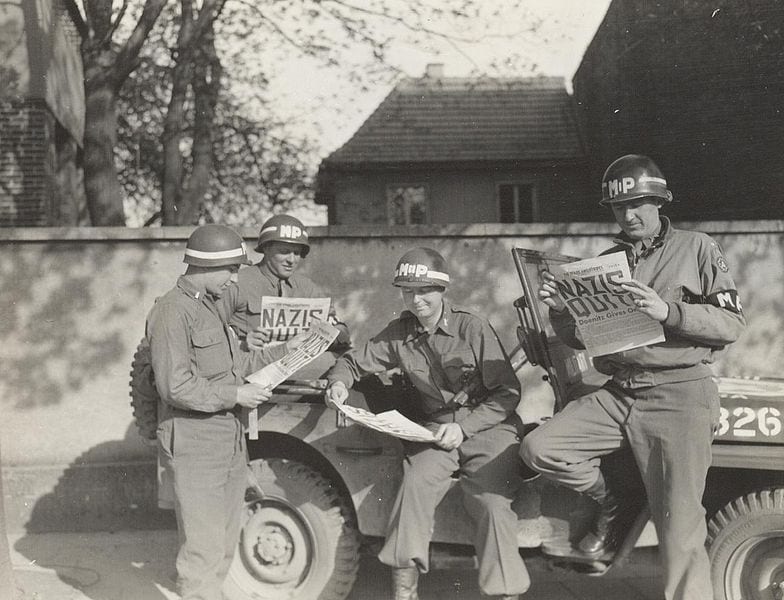 World War II, the worst conflict in human history, was ending 75 years ago. On May 8, 1945, Germany surrendered, ending combat in Europe. The war in the Pacific went on for nearly four months longer, but the final act there was coming to a close. Germany had been the stronger combatant, more murderous and evil. From Rome and Paris to Moscow, much of an entire continent had been laid waste. Finally, the bullets and bombs stopped flying.

But anything but peace was the result. Six years of conflict destroyed governments, institutions, organizations, communities, associations, and families. Even functioning democracies confronted dramatic change: Franklin Delano Roosevelt was dead and Winston Churchill was out.

The presumptive democracies, most notably France and Czechoslovakia, were in far worse shape. The former faced a bitter battle over who and what would replace the collaborationist regime. The latter was occupied by the Soviet Union, “liberated” by a tyranny no less suffocating and brutal than the one destroyed. Within three years, Prague was fully absorbed into the Soviet Empire.

One of the worst betrayals of the freedom values espoused and supposedly defended by the West was Operation Keelhaul.

The fate of Eastern Europe was no different, only the pain came sooner. Soviet troops brought their political masters’ oppressive system along. Not that there was much heritage of liberal democracy to preserve. “Western” values had been largely absent from the region, which was filled with strongmen of various tempers. Even victims, like Poland, had behaved badly; that authoritarian regime feasted on the territorial carcass of Czechoslovakia before being consumed by Germany and the USSR.

Poland suffered more than any other nation. Newly independent after World War I, Warsaw had to defeat the new Bolshevik state to survive. With the rise of Nazi Germany, Poland was squeezed between two aggressive, totalitarian powers. Before World War II Warsaw rejected Western proposals that envisioned Soviet transit through or military presence on Polish soil since the Poles understandably had no confidence the troops would leave.

The infamous Hitler–Stalin pact sealed Poland’s fate. A generation after the latter’s refunding, it was wiped out as an independent country when Germany opened World War II in the east. Nazi rule was particularly hideous. Perhaps six million people — half of them Jews — or about 17 percent of the population, died. Nazi mass murder was replaced by Soviet mass repression.

Moscow sought to wipe out those capable of resisting the USSR. Some 22,000 military officers, policemen, professionals, and other members of the intelligentsia were murdered — most famously in Katyn Forest, but also at Kalinin and Kharkiv prisons. The death toll was lower than that exacted by Germany, but the intent was similarly malignant. As the war wound down, nearly a score of Polish leaders from the government-in-exile and underground were invited to consultations by Moscow; in a further act of decapitation, they were arrested and convicted of various charges ranging from collaboration with Germany to criticism of the Soviet Union.

That presaged a brutal occupation, in which Soviet troops plundered the country of industrial equipment and other economic goods and annexed Polish territory east of the Curzon Line. Poland was in turn pushed west, with the forced cession of German territory. Millions of Poles either fled or were expelled from their homes by the Soviets.

The relationship between Poland and its oppressor was never friendly. An uprising by industrial workers in 1956 led to a threat of Soviet invasion and change in Polish leadership. Ultimately the government’s economic failures and dramatic rise of the Solidarity Union undermined the regime’s control, led to renewed Soviet threats of intervention, and triggered a crackdown, including imposition of martial law in 1981, orchestrated by Gen. Wojciech Jaruzelski, the defense minister elected as First Secretary of the United Workers’ (Communist) Party. In 1989, Poland finally achieved true liberation.

A largely ignored humanitarian horror involved Germans forced from their homes after the war. Some seven to 10 million fled, some scared, some pushed, from lands given to Poland. Czechoslovakia emptied the Sudetenland of ethnic Germans. Millions more came from territory seized by the USSR as well as the Baltic States, Hungary, Romania, and Yugoslavia. Since many ethnic Germans outside of Germany had cooperated with the Nazi regime, brutal retribution was not surprising, but it impoverished and harmed irrespective of guilt. Estimates as to the number of deaths ranged from a half million to 2.5 million.

The Balkans featured a civil war in Greece, where communists battled several Western-oriented groups backed by the United Kingdom and the United States. By 1949 the communists were defeated. Another fight developed in Yugoslavia, through which Josip Broz Tito triumphed. He was no more gentle than other communist dictators, exacting his vengeance against his opponents, but he did separate his nation from the Soviet Union in 1948.

That same year, the new state of Israel was created. The unimaginable horror of the Holocaust led many survivors to seek sanctuary in the location of the historic kingdom of the Hebrews. Perhaps unsurprisingly for the time, the Jewish homeland, a consequence of war, had to be born in war. But the new nation survived.

One of the worst betrayals of the freedom values espoused and supposedly defended by the West was Operation Keelhaul. The UK and U.S. governments forcibly repatriated tens of thousands of Soviet POWs to Stalin’s not so tender mercies in late 1946 and early 1947. Hungarians and Yugoslavs also were transferred to their nations’ new communist rulers. The returnees were commonly betrayed, since doing so was the most effective way to deliver them to prison or death, the inevitable fate for returnees. Also rounded up were some Russian émigrés, never Soviet citizens, who had fled after the Revolution and defeat of the Whites in the subsequent civil war.

Yet much of the drama and horror of this period took place beyond politics, one person and family at a time. Millions of people had been displaced. Poverty and hunger were pervasive. Masses of people, especially in German cities destroyed by bombing, were homeless. Survivors of labor and death camps were desperate to get back to homes and communities that might no longer exist. Millions of European civilians had been pressed into forced labor. Many German soldiers had surrendered or deserted far from home. Foreign POWs had been imprisoned in Germany. Collaborators faced revenge and retribution across occupied nations. Leaders old and new clashed over the political order to establish. And Nazi officials and criminals sought to escape responsibility and justice for the human and physical wreckage they left behind.

At the most fundamental level, civilization itself seemed to have disappeared.

And, thankfully, there was also good. As well as heroism, charity, strength, fortitude, kindness, courage, resistance. Those too we must remember. Today and forevermore.