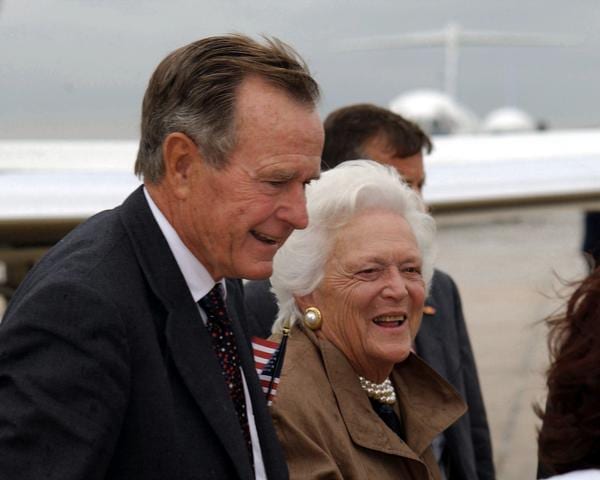 I am not here today comparing “The Bushes” to any other political tribe or family extant or extinguished!

That needs fully to be understood before I open my mouth wider.

The highly publicized death and burial of the family’s matriarch puts in my mind, and I hope the minds of others, a matter little remarked on since the 20thcentury. To wit, the norms and the decencies, the styles and the modes Americans once took for granted in their common life.

“The Bushes” have over the decades exemplified just such norms and modes: whose passing, and that of Barbara Bush as a physical presence, shrinks in an unfortunate way the connective strands between our own time and that which nourished the Bush tribe.

We are a different breed of cat now. Which is too bad. The breed we used to be had much going for it.

I know not everyone appreciates, shall we say, the ways and modes of “The Bushes,” especially when it comes to political policies remembered as squishy or concessionary. I was myself off the patriarch for a long time after he demonstrated that “Read my lips: No new taxes” (his 1988 pledge) meant in fact, “Sorry, gotta have the cash.” As a president, the patriarch sometimes made a great veep. Son George W.’s conservatism, during his White House years, embraced some kindly meant but badly conceived initiatives; e.g., Medicare expansion.

I recall in spite of these and like concerns that the political cycle, back when “The Bushes” flourished, left room for non-political considerations. Politics — meaning special counsels, scandals, crises, approval ratings, edge-of-your-seat maneuvers — was not yet at the center of everything.

Politics and culture mixed and mingled, as always, but with room, encouraged by “The Bushes,” among others, for common (or once-common) decencies to act and work on life. A sexual assault or Second Amendment crisis was hard to imagine in Bush times; harder still to imagine would be the need for national mobilization, with a Bush, or Bush-type, leading the avenging pack. We didn’t use to think so much in those terms as we now do.

The spirit of which “The Bushes” partook, as mentors, was the spirit of a culture generally content, when it came to engaging problems, to consult the resources of inner character — getting things done, rather than yelling and scoring points. American culture still had a sense of humor. It didn’t fly into rages. It put a low premium on venomous modes of expression. It appeared to value human achievement, both honoring and promoting it. It had by present standards good manners; it tended, with little show of latent Puritanism, to value honesty, dignity, and personal restraint.

I think “The Bushes” lived — continue to live — in this spirit. They are poor haters, reluctant revilers. They do not storm about looking for people to beat up and malign. They would rather encounter people to work with, or to help.

Which is unfashionable, as are geniality and courtesy at the present moment. It wasn’t that way so very long ago. The attributes of “The Bushes” — for all their salt-flecked, Down East leanings — were widespread in the culture of half a century ago.

It is not idealizing the dead culture of those dead times to say that manners and dignity alike, as well as patriotism and national spirit, had a hold on most Americans. We who were around then were more like “The Bushes” than we seem to resemble their replacements.

We hadn’t yet fallen into rage-and-rant mode. We retained the hope of working things out, with some display of patriotism and good will. We didn’t think political ambition beat out competence. We put “The Bushes” in power because at the time they generally reflected our self-understanding.

We wouldn’t do it today — hence the pasting administered “Low-Energy Jeb” when he tried for the presidency in 2016. “Low energy” — just imagine! Such a guy wouldn’t bash and smash people. He’d make speeches and draw up plans. He wouldn’t fit. Neither would many another with his surname, sadly, for purposes non-political in the sense we now attach to politics.