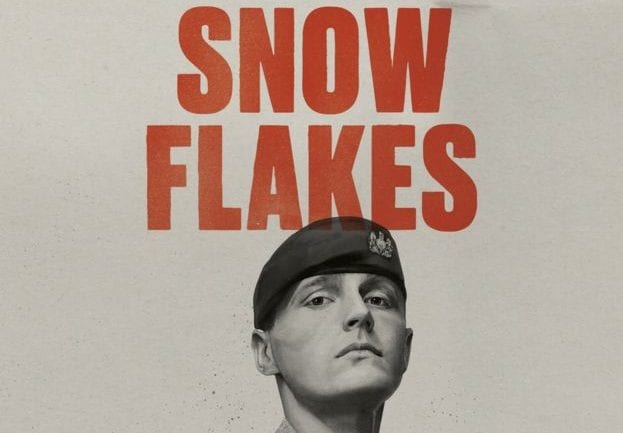 The government of the once great Britain seriously seeks snowflakes for their army. Their recruitment posters are alarming: 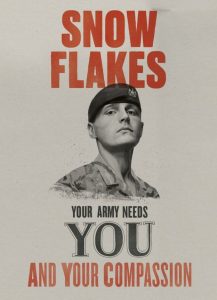 Lest Americans think they’re better off than our limey friends….

A recent New York Times article (that Dan Flynn pointed to in his Spectator AM Email this morning) highlighted ongoing efforts by the Army to muster new recruits in America’s big liberal metropolises. As expected, the efforts have proven largely unsuccessful. The Army’s rationale behind the decision to focus efforts on two dozen large liberal cities is that “these are places where a large number of youth who just don’t know what the military is about,” according to the head of Army Recruiting Command, Major General Frank Muth. It is true that these markets are largely untapped, but perhaps for good reason.

While these efforts to diversify the military have largely been ignored by liberal communities and potential recruits, there are some positive aspects to this new program. Emphasis on recruiting individuals interested in the medical, engineering, and computer tech fields in areas where larger numbers of people are educated in those fields are well needed. Having qualified people working in engineering and healthcare is essential, and cybersecurity is an area the United States military is sorely lacking.

Traditionally, military recruits in the United States have been vastly overrepresented by Southerners and Westerners, where military families and communities thrive and patriotism is strong. In the South, young people are two to three times more likely to join the military than their peers in different regions. Perhaps it would be best for recruiters to focus their efforts on their most reliable bases, rather than chasing after “new markets”.

Fiscal 2018 was the first year in over a decade that the Army failed to meet recruitment numbers. This lack of manpower is expected, as the percent of the population that can be recruited is ever shrinking due to health issues, criminal records, and failing to pass muster. The full situation of America’s recruitment crisis is laid out in a Heritage Foundation report from February 2018. Because of this, recruiters have to find new and innovative ways to get people to enlist.

Earlier this year, the Navy spent $457 million dollars coming up with a new brand and slogan, “Forged by the Sea”, the fourth of the cost of a guided missile destroyer, as Gerald D. Skoning pointed out in The American Spectator last April. This November, the Army launched efforts to create competitive CrossFit and esports teams to reach new audiences. Esports teams are in the works for games like Call of Duty and Fortnite.

Powers fall because their people become self-satisfied, amoral, weak-willed, and stupid. Citizens in both Britain and the United States should be worried.