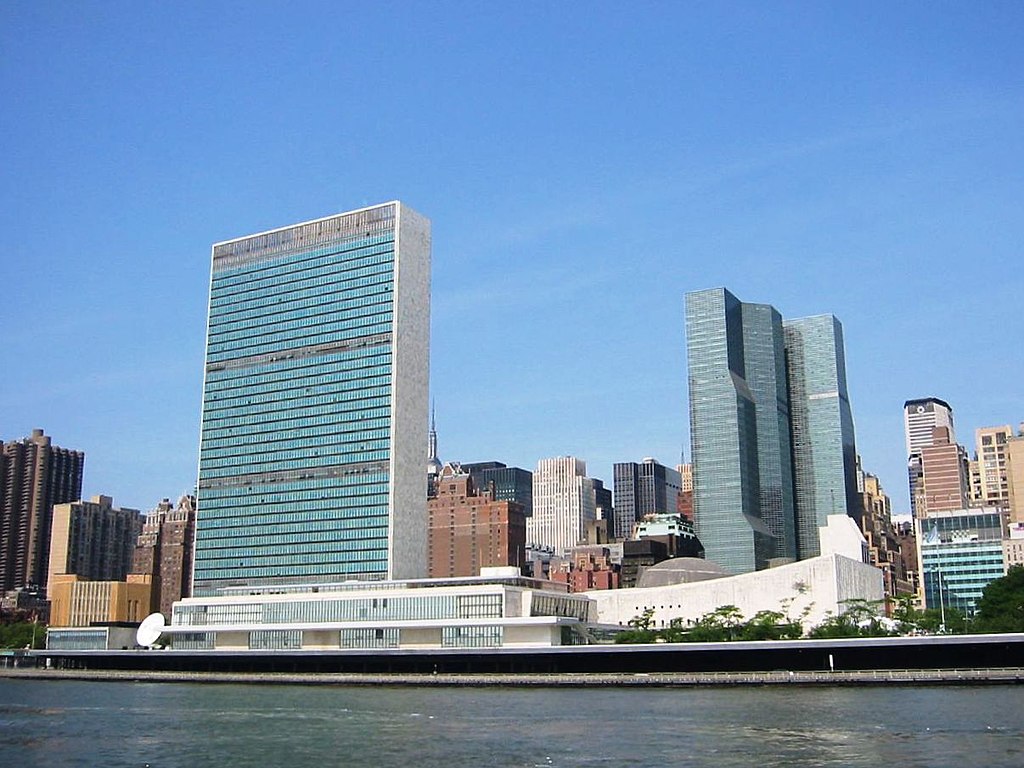 I’m late in acknowledging UN Day — which took place on October 24 — but hey, no big deal. After all, the UN was tardy in acknowledging the Rwanda genocide. It dropped the ball on the Srebrenica genocide, too. So I figure that filing this piece a few days after the fact is, in a sense, rather appropriate.

I grew up in New York City, and over the years went on trips with my class to the Museum of Natural History, to the Roosevelt home at Hyde Park, even to the Victorian mansions in Newport, Rhode Island. And one day, in sixth grade or thereabouts, our big yellow bus took us to the United Nations.

I was always fascinated by the UN. Imagine, there were these buildings where representatives of almost every country in the world got together daily. And it wasn’t a part of the U.S. — it was extraterritorial. It issues its own postage stamps! And all this was right there on the East River, across 42nd Street from the Con Edison plant where my father worked in the clinic!

On that UN trip, we weren’t just given a tour but a promotional spiel. The UN, we were told, was about all good things — freedom, justice, peace, “the dignity and worth of the human person,” etc. It was all spelled out in the Universal Declaration of Human Rights, a passage from which was engraved in a stone wall on the other side of First Avenue.

It was all quite cool. Still, I never bought into all that high-flown rhetoric about freedom and so forth. I knew better — thanks largely to my grandmother.

When I was a kid, if you left the UN building, turned left onto First Avenue, walked a couple of miles, and made a right, you’d soon find yourself at the front steps of my grandmother’s walk-up. She was Polish, and her native village had been under the Soviet thumb since before I was born. She had relatives behind the Iron Curtain whom she couldn’t visit without difficulty and dread, and who certainly couldn’t visit her. They were captives, plain and simple, although the UN never put it that way. How could it? Back then, the communist and “non-aligned” (i.e., communist-leaning) countries dominated the UN.

It was my awareness of the reality of life in the Soviet bloc that led me early on to read voraciously about communism. And it was that self-education that led me to see the UN for what it was. The people of the Soviet bloc, I understood, weren’t represented at the UN any more than they were represented in Moscow. They were chattel. And the UN, the noble UN, pretended otherwise.

When I was 15, Taiwan was thrown out of the UN. I still recall the sight of the Taiwan delegation walking out of the General Assembly, humiliated but dignified. I knew this expulsion was wrong. Representatives of a freely elected government were being replaced by representatives of a dictatorship.

Ultimately — no thanks to the UN — the Soviet Union fell, along with its satellites. But that doesn’t mean the UN became a parliament of free peoples. No, it’s still dominated by tyrannies. Today, they’re Islamic. Human-rights offenses in those countries are almost never acknowledged in the corridors of Turtle Bay; on the contrary, it’s Israel, only democracy in the Middle East, that is repeatedly singled out for condemnation. On October 13, China, Cuba, Pakistan, and Russia were all elected to the UN Human Rights Council (UNHRC), once again making a mockery of the notion that the UN actually stands for human rights.

In 2012, I wrote here about UN Me, a documentary by Ami Horowitz and Matt Groff that pulled back the curtain on the real UN — from the sloth of Secretariat staffers to the criminality of UN peacekeepers to the petty priorities of officials for whom protecting the organization’s “image of impartiality” trumps action against even the most monstrous evildoers. I’ve also written about UN Watch, the vital “watchdog group” that routinely calls the UN out on its violations of its own charter.

Thanks to facts served up by UN Watch, UN Me, and journalists like Claudia Rosett, attentive observers have long since ceased to see the UN through rose-colored glasses. Yet all over the world, people continue to eulogize the UN. And nowhere on Earth is the UN taken more seriously than in Norway, where I live.

No surprise, then, that UN Day was commemorated this year by an article on a scholarly website that was basically a love letter to the organization. It quoted Christine Smith-Simonsen, a historian at the University of Tromsø, as asserting that “a world without the UN would be disastrous.” Didn’t she have any criticisms of the UN? Yes — it’s too Western-oriented. Thank goodness, she said, that Communist China and the USSR had permanent Security Council seats!

For his part, Arne Overrein, a philosophy prof at the same university, celebrated the UN for “embracing all peoples” and creating “a global world” in which all cultures are equal. “The UN has inspired many,” said Overrein, who also thinks “there would have been more war without the UN.” In Norway, then, even people who would be considered members of the intellectual elite are reliable parrots of exactly the same pro-UN PR that I was fed as a kid on my first UN tour.

That school trip to the UN was only my first visit to that extraterritorial compound. In my teens and 20s, when I was a serious flâneur, I often dropped into the UN just to check out the gift shop and all the self-important foreigners. Later I lived on East 49th Street, around the corner from the UN, and in nice weather I would walk over to the UN grounds to have lunch, or read, on a bench in the sunshine while watching the diplomats and tourists go in and out. (Since 9/11, security measures have made such pleasures difficult, if not impossible.)

I finally decided I was through with the UN when President Trump addressed the General Assembly in September 2018. He opened his speech by outlining some of his administration’s recent achievements. And much of the audience laughed. Laughed! The representatives of thugs and knaves — of dictators who run labor camps, execute gays, kill “disobedient” girls, and murder political opponents — laughed at him. And the U.S. media, by and large, took their side.

No more. No more. If Trump wins a second term, one of my hopes will be that he’ll pull the U.S. out of the UN — and that the next time I walk past those buildings on First Avenue, they’ll be a luxury Trump hotel.