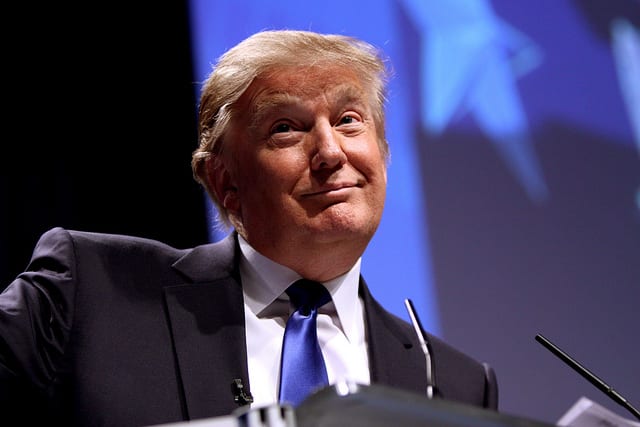 A coalition of business groups is fighting back against President Trump’s tariffs, issuing a letter to members of Congress urging them to act against the taxes.

“We…strongly encourage Congress to exercise its oversight role on trade policy matters to prevent further harm to U.S. workers, consumers and families that will result from new tariffs — both those already being implemented and future tariffs that have been proposed,” the letter says.

The group, called Americans for Free Trade (AFT), is comprised of companies from about 60 different industry groups and is kickstarting a campaign it calls “Tariffs Hurt the Heartland.” That includes the letter to Congress, ad purchases and hosting meetings with voters in swing states that include Illinois, Indiana, Ohio, Pennsylvania, and Tennessee. AFT hopes to expand its effort to about a dozen states by the end of 2018.

“We had hoped we wouldn’t get to this point, but there has been no sign of progress in the talks or de-escalation, simply more rhetoric about increasing tariffs, that’s not going to be good for the economy,” Matthew Shay, president of the National Retail Federation that is among the leaders of the coalition, told CNBC.

Trump has imposed 25-percent tariffs on steel and 10-percent tariffs on aluminum imported from Canada, Mexico, and the European Union. He has imposed, or is in the process of imposing, 25-percent duties on $200 billions of imports from China, and has threatened to add another $267 billion in imports that would essentially cover anything shipped from China to the United States.

Those tariffs have been met by corresponding duties from the affected nations and have drawn sharp rebukes from American economists. Trump hopes that his tariffs will benefit the U.S. in the long-term by reducing America’s trade deficits with some of those countries and boosting employment. He hopes his battle with China will convince the country to respect America’s intellectual property and allow American countries better access to its markets.

In the short-term, economists warn of a hit to the economy due to job losses and increased consumer prices. Already, many industries have announced job cuts or prophesied profit losses.

If there was any question of how the business industry feels about the tariffs, “Tariffs Hurt the Heartland” should answer it.

“A lot of other interest groups thought they wouldn’t go this long or go this deep, but the layering effect (of tariffs) has finally gotten everyone to say ‘Enough is enough,’” Nicole Vasilaros, the top lobbyist for the National Marine Manufacturers Association, told Reuters.

The members of that association have seen its costs rise some 35 percent, which will likely lead to employment cuts.

The Consumer Technology Association (CTA), another member of AFT, found in a study that a tariff on $200 billion in Chinese goods could increase its costs as much as $1.8 billion.

Gary Shapiro, the president and CEO of CTA, said the tariffs could roll back much of the good work that Trump has done for the economy since becoming president.

“The sugar high of the lower taxes and the reduced rules that have fueled the stock market since the president was elected are in jeopardy,” Shapiro said.

A fringe benefit to members of AFT — and a possible blow to taxpayers — could be more handouts to businesses affected by the tariffs. CNBC points out that the agricultural industry scored $12 billion in farm aid after highlighting the effect the duties have had on farmers. “Tariffs Hurt the Heartland” could offer the same kind of grease for AFT.