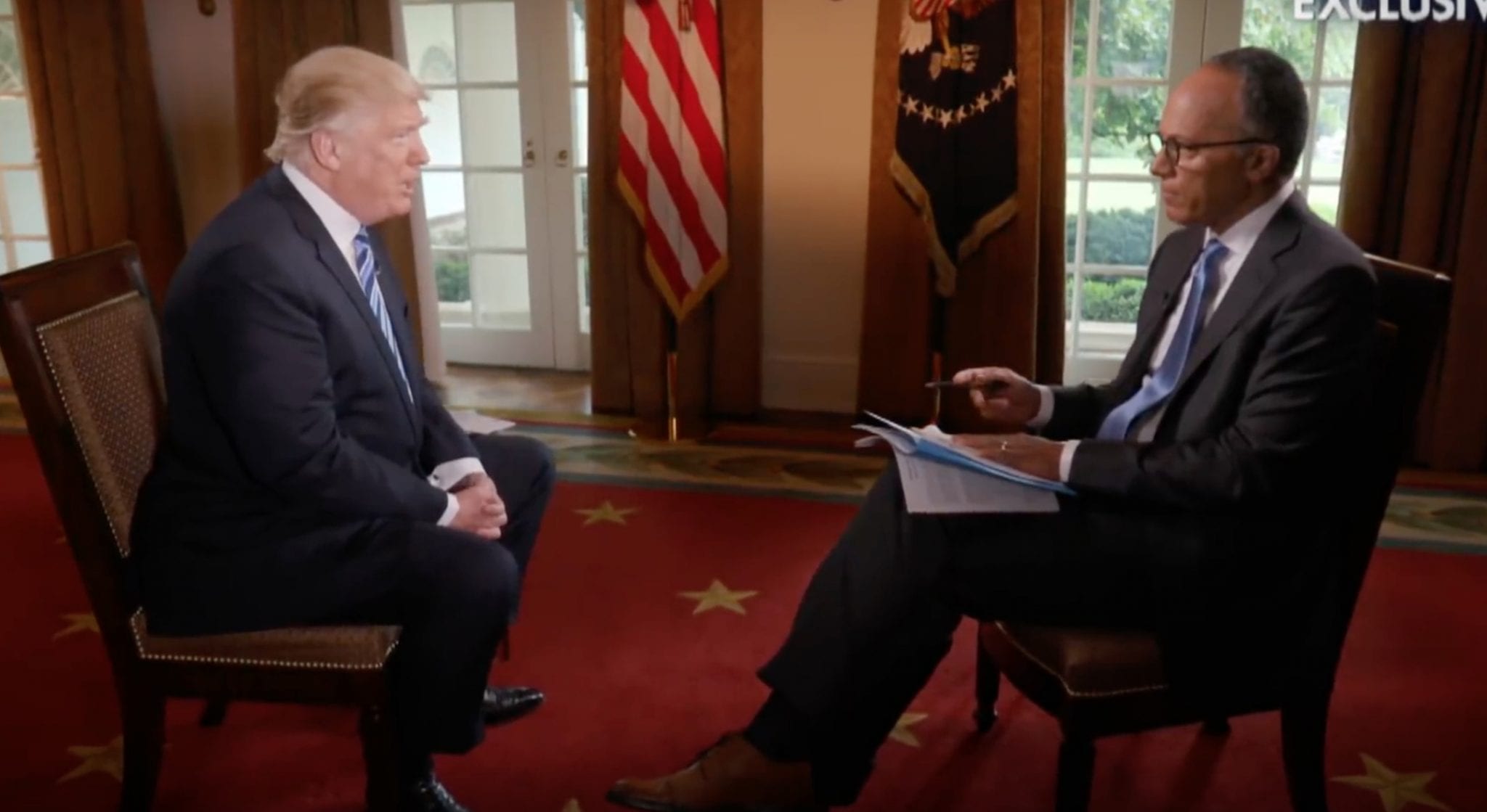 When President Donald Trump sat down for an interview with NBC’s Lester Holt on May 11, 2017, the president did what he often does when he talks on camera — he did not hold back his grievances and he contradicted previous White House staff pronouncements.

When Trump acts out in this way, his supporters usually shrug and say that it’s just Trump being Trump, and maybe he knows what he’s doing because he did, after all, win the White House.

In this interview, however, the stakes could not have been higher. It was two days after Trump had fired FBI Director James Comey, ostensibly based on the recommendations of Attorney General Jeff Sessions and Deputy Attorney General Rod Rosenstein.

In a letter urging the firing, Rosenstein condemned Comey’s public pronouncements on the FBI probe into former Secretary of State Hillary Clinton’s use of a private email server. Rosenstein scolded Comey for flouting a “longstanding principle” at the FBI: “we do not hold press conferences to release derogatory information about the subject of a declined criminal investigation.”

Comey held two such press conferences — one on July 5, 2016, the other within a week of the election.

The White House distributed the Sessions and Rosenstein letters as the basis for Trump’s decision to fire Comey.

Two days later, in the Holt interview, Trump made a mockery of the administration’s official line.

“Regardless of recommendation, I was going to fire Comey,” Trump confided to Holt. “When I decided to just do it, I said to myself, you know, this Russia thing with Trump and Russia is a made up story, it’s an excuse by the Democrats for having lost an election they should have won.”

To be sure, few Washingtonians had bought the official White House line.

During the 2016 election, Trump seemed pleased with Comey’s behavior. Then there was a matter of the timing. If Comey’s Clinton press conferences were the catalyst for Trump’s decision, why didn’t the president fire Comey shortly after he took office? Also, the cold manner in which Comey was canned — Trump sent a letter to Comey’s office while the FBI chief was in Los Angeles — suggested there was some anger behind the move.

The Holt interview was a disaster as it revealed a chief executive who had used top members of his team to peddle a narrative he knew to be false — with little concern for their reputations.

Trump effectively corroborated what his critics suspected — that the Rosenstein memo was a beard — just because he felt like it. It was a betrayal breathtaking in its lack of utility.

Last month, the New York Times ran a story that suggested Rosenstein felt poorly used in the Comey firing — which may have been a factor in his decision to designate former FBI Director Robert Mueller as special counsel days later. A Department of Justice spokeswoman denied the link.

In his book, The Briefing: Politics, the Press and the President, former White House Press Secretary Sean Spicer wrote about the difficulty he had lining up Republicans who would defend the Comey firing the night it happened.

“We got a universal, 100 percent ‘no’ from Republican Senators,” Spicer wrote, a response for which he credited the White House’s failure to notify and consult GOP members.

Trump has used Twitter to ask valid questions about the Russian probe. Why couldn’t Mueller have found a Trump donor to join the many Clinton donors in his stable of lawyers? The Democratic National Committee and Clinton bankrolled the unverified “dossier” cited by prosecutors — is that collusion?

Alas, Trump being Trump means not leaving well enough alone. Wednesday, the president took to Twitter to urge Sessions, who recused himself from the Russian probe, to “stop this Rigged Witch Hunt right now.” He brought himself back to the dark days of May 2017 when Washington waited to see if he would try to impede a federal investigation.

While D.C. Democrats slammed the Twitter rant as another attempt to obstruct justice, many in the usual chorus of cable news Trump boosters were eerily silent.

“The last thing that the Republicans need is to look like they are covering up for the president,” explained Mark Corallo who briefly worked as a spokesman for Trump’s Russia legal team.

And it doesn’t help that Trump leaned on Sessions on the heels of the July joint press conference with Russian President Vladimir Putin at which Trump repeated Putin’s claim that Russia did not meddle in the 2016 election. “He just said it’s not Russia,” Trump said. “I will say this, I don’t see any reason why it would be.”

Is this again Trump just being Trump? Because it’s getting old. If there was no collusion between the Trump campaign and Russian actors, why doesn’t Trump act like it?