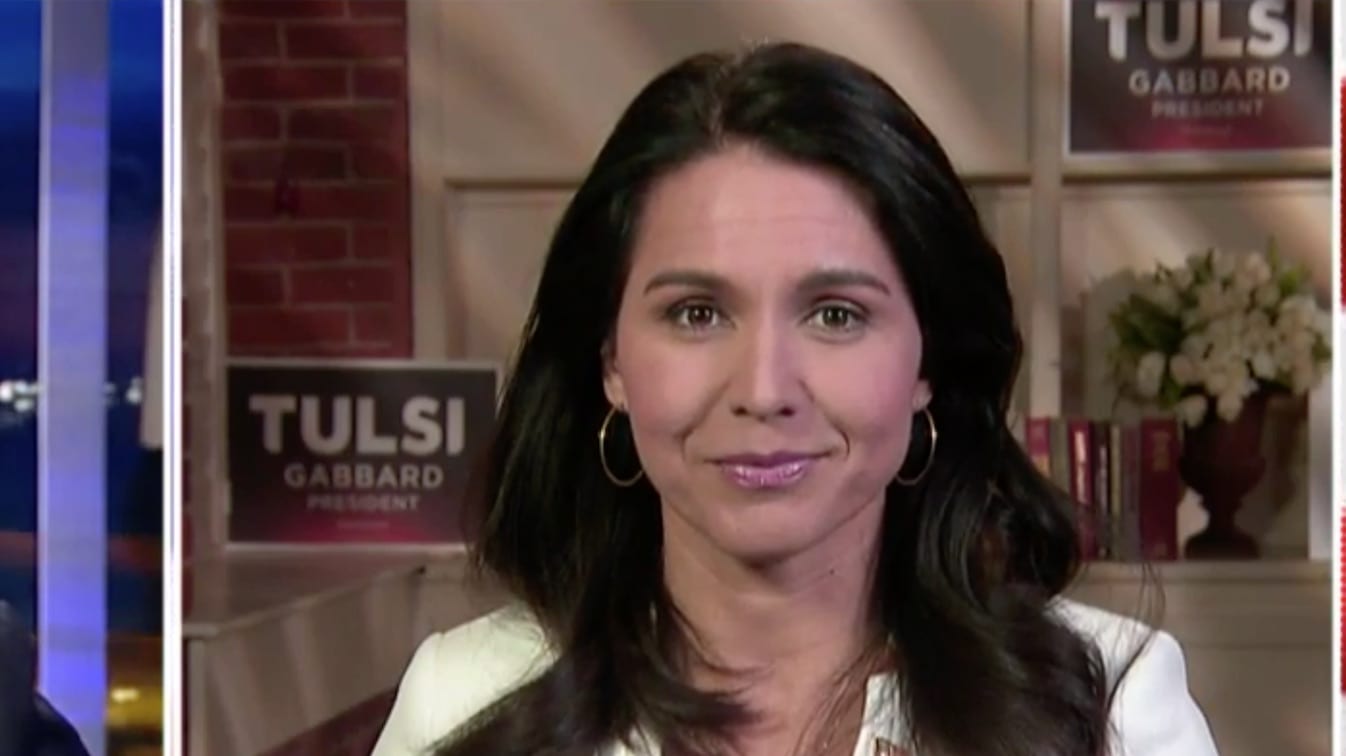 Last week, lost in all the pointless haranguing about an impeachment trial that isn’t going anywhere was news of a truly entertaining political imbroglio.

Namely, the $50 million lawsuit Tulsi Gabbard filed against Hillary Clinton. One doesn’t have to be a fan of either, and your author certainly doesn’t subscribe to either one as a suitable national leader, to find the lawsuit absolutely delicious and hope it lasts forever.

The suit is a defamation action arising from some fairly typical babbling Clinton has engaged in since the American public turned her away as a presidential candidate in 2016. In a podcast three months ago, Clinton accused Gabbard of being a Republican stooge and a puppet of Vladimir Putin:

Clinton said Republicans were “grooming” a Democratic presidential candidate for a third-party bid. She also referred to Gabbard, without mentioning her by name, as a favorite of the Russians.

“They’re also going to do third-party. I’m not making any predictions, but I think they’ve got their eye on somebody who’s currently in the Democratic primary and are grooming her to be the third-party candidate,” Clinton said.

“She’s the favorite of the Russians, they have a bunch of sites and bots and other ways of supporting her so far, and that’s assuming Jill Stein will give it up, which she might not, because she’s also a Russian asset. Yeah, she’s a Russian asset, I mean totally. They know they can’t win without a third-party candidate,” Clinton said.

Gabbard, a congresswoman from Hawaii and a minor presidential candidate who’s found some notoriety within the Democrat electorate, though not a lot of money or votes for having departed from the party’s establishment on a few issues (though not enough to make her palatable as a presidential candidate), wasn’t going to take Clinton’s strange accusations lying down.

Initially, she blasted Clinton on Twitter — and got Hillary exactly right. Gabbard called her the “queen of warmongers, embodiment of corruption, and personification of the rot that has sickened the Democratic Party for so long.” Gabbard followed that up with an op-ed at the Wall Street Journal, saying that she was running for president “to undo Mrs. Clinton’s failed legacy.”

That wasn’t all. Gabbard said Clinton couldn’t get over the slight of Gabbard endorsing Bernie Sanders in 2016 and accused Clinton of smearing her ever since.

And she called Clinton a warmonger.

“Whether Mrs. Clinton’s name is on the ballot or not, her foreign policy will be,” the op-ed said, adding that too many of her Democrat competitors “adhere to her doctrine of acting as the world’s police, using the tools of war to overthrow governments we don’t like, wasting taxpayer dollars, costing American lives, causing suffering and destruction abroad, and undermining America’s security.”

The controversy died down a bit, largely because Clinton spent November and December mostly in the shadows. She then popped her head out of whatever reeking cesspool it was deposited in to trash Sanders by saying “nobody likes him,” which is more true than not, and while Clinton was in the news Gabbard apparently decided to monetize, politically and financially, the moment by filing the lawsuit.

In an appearance on Tucker Carlson’s show last week, Gabbard poured it on thick with respect to Clinton’s attacks.

“For me as a soldier, as every service member does, I took an oath of loyalty to our country — the country that I love, willing to put my life on the line for our country — deploying twice to the Middle East to do so,” she said. “So when you have someone as powerful as Hillary Clinton seeking to smear my reputation and essentially implying that I’m a traitor to the country that I love, what she essentially is doing is taking my life away.”

Not that your author disapproves. Nothing is better than watching someone play Hillary’s victim after enduring three decades of Mrs. Clinton’s prevarications, poor-mouthing, and paranoia. Hillary is everyone’s victim, don’t you know, and in her dotage she’s traded in the Vast Right-Wing Conspiracy for the far more grandiose Vast Russian Conspiracy.

Because everyone knows what conspirators the Russians are, after all. As villains they’re a bit more believable than Pat Robertson and Ken Starr.

Except for Clinton to continue pushing the Evil Russians meme is obnoxious enough to merit a $50 million lawsuit from somebody, because after all there is no one in America who has less leverage to trash others as Putin’s puppets than Hillary Clinton.

How much Russian money flowed into the Clinton Foundation over the years, Hillary? And exactly how did that Uranium One deal go down, anyway?

And what was that “Russian Reset” about, after all?

For this doddering lunatic in her mumu dresses from a vintage Sears catalog to attempt relevance at the expense of others on the basis of throwing around accusations of kompromat and treason is poor political hygiene to the extreme. Something ought to be done about it.

Clearly the mainstream media, either out of loyalty or fear of ending up like Jeffrey Epstein, won’t call Clinton out and demand she shut up and go away. So sure, let Gabbard and her lawyer drag Hillary into court and scuff her up a bit.

The suit isn’t likely to gouge any money out of Clinton’s graft-pile, but the longer it goes on, the less likely it is that Clinton will get a platform to speak without having to defend her smears of Gabbard to interviewers. And that, for those of us who are beyond fed up with the batty things she says, is at least a small measure of relief.