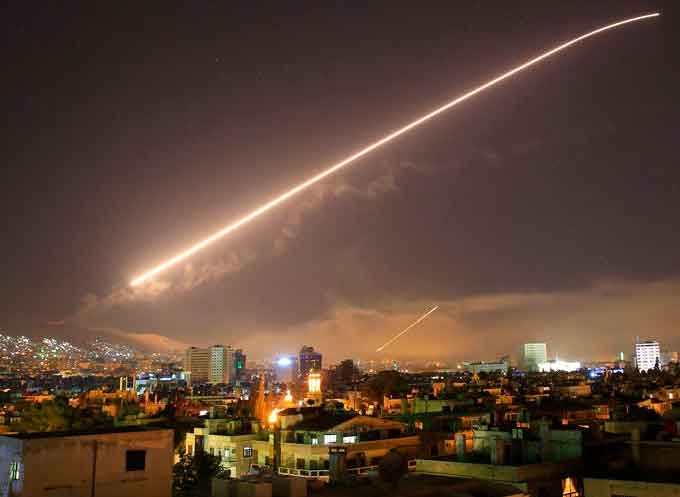 A year ago, President Trump ordered a cruise missile strike on a Syrian airbase which had launched a chemical weapons attack on civilians. He drew a clear red line against the use of such weapons and — entirely unlike former president Obama who had declared a similar red line against the use of those weapons — Trump enforced Syria’s violation of it.

After a week of seeming indecision, during which careful plans were made and allies’ participation obtained, the Friday night strike against three chemical weapons targets in Syria responded to the most recent Syrian chemical weapons attack.

Not only did we launch cruise missiles from surface ships and a submarine — and Joint Direct Attack Munitions from Air Force B-1s — the British and French both joined in, firing their own cruise missiles.

If all that doesn’t mark sufficiently the changes that Trump has wrought over the bad old days of his predecessors, think about this.

Fifteen years ago, when our invasion of Iraq began, a reporter asked French Foreign Minister Dominique de Villepin which side he wanted to win the war. He refused to answer.

Now we have France as a willing and cooperative ally, at least for the moment.

Russian reaction was hot and intemperate. At first, the Russians insisted that the Friday attack was a personal insult to Russian President Vladimir Putin. Since then, they have condemned the attack and asked the UN Security Council to condemn it by resolution. That was vetoed by Ambassador Nikki Haley who proclaimed that our forces were “locked and loaded” to do it again if Assad launched another chemical attack. The Russians insist that there will be consequences for our attack, but it’s entirely unclear what that means.

The attack was accomplished despite Russian threats to both shoot down our cruise missiles and target the assets that launched them. Russia was running a bluff, and Trump called them on it.

Russia and Syria claimed that they had shot down 71 of 103 missiles the allies fired. (We and our allies actually launched 105 according to the Pentagon).

In a Saturday news conference, Marine Lt. Gen. Kenneth McKenzie confirmed that all of the attacking missiles had reached their targets with the desired effect. McKenzie, asked about Russian actions, said that the Russians don’t have a veto over what we do.

You can see part of the reason we succeeded in the AP photo of Syrian defensive missiles being launched that appeared in the Washington Post and on Fox News, which has a significance first spotted by my pal Dave Patterson.

The Syrian defense missiles are blasting thousands of feet into the air seeking our cruise missiles. But they seemed to have forgotten that our cruise missiles were skimming along at treetop level heading inexorably to their targets. The Syrian missiles made a big noise but were entirely ineffective in stopping our attack.

The success of our attack — in areas defended by the very best Russian anti-air defense systems, the S-300s and S-400s — are most likely explained by the failure of the Russian crews to activate their radars. The Russians clearly value our presumed ignorance of how their systems work more than they value whatever it is in Syria we want to destroy.

It was a lose-lose proposition for the Russians. If they turned on their radars and shot down a bunch of our missiles, we would have learned a lot about how their systems operate. Furthermore, if they launched their missiles at ours and missed, the world would know how ineffective they are.

The picture of Syrian defensive missiles being launched demonstrated the ignorance of the press, which hasn’t learned much since the 2003 Iraq invasion. Then, reports of cruise missiles flying in formation toward Baghdad included at least one report that the missiles seemed to pause in mid-air and turn down specific streets to reach their targets. That may work in Road Runner cartoons, but not in reality.

The president said that what comes next is up to Assad. That’s not even close to true. Russia and Iran, both of which still dominate the Syrian battlefield, can control what Assad does.

The president should get considerable credit for punishing Assad — and Russia, which the president specifically blamed for enabling Assad’s slaughter of civilians — by the Friday attack. But his policy toward Syria, and its Russian and Iranian allies — is a muddle.

The president says that we aren’t trying to topple the Assad regime. He wants to punish the use of chemical weapons, but we have no clear policy or goal. The question remains: What are we trying to accomplish in Syria?

As retired Marine Lt. Col. Oliver North said on Saturday, Syria is a failed state. If you look at a good map of the conflict, Syria, Russia, and Iran control about two-thirds of the country. About one-third of it is in the hands of the Kurds and other U.S.-allied forces. Pockets are still controlled by ISIS and the ineffective Syrian resistance to Assad.

Unless the Russians and Iranians — and their Turkish allies — can drive the Kurds out of northeastern Syria, the nation is not going to be united under their control.

As the Middle East Media Research Institute reported, the Kurds have been supported by Saudi Crown Prince Muhammad bin Salman who said recently that “Assad is staying.”

We shouldn’t — and truthfully can’t — just abandon the field leaving the Kurds alone to defend areas that they believe should be part of a Kurdish nation.

Syria could be partitioned, leaving the Kurds in control of much of the country. But the Turks, avowed enemies of the Kurds, won’t stand for that. If we intend, as the president says, to remain only until ISIS is defeated, we would be abandoning the Kurds.

Punishing Assad — and condemning the Russians and Iranians — for the use of chemical weapons is at best half a policy. The president needs to decide what the other half is.

In short, we are in for another long war with no end in sight and no goal for our forces other than helping the Kurds defend the land they have taken at our urging.

We need to do better, and we must. As MEMRI reported, the Saudis’ support for Assad may have come because of their desire to create a break between Assad and Iran. That simply can’t happen. Assad’s Alewite regime is not like the Sunni Saudi regime: it is more Shiite than Sunni and thus a natural ally of Iran. If Prince bin Salman had been in power six years ago, his ploy could have worked. President Trump and his advisers should be able to persuade the prince of that fact.

That can only be done at considerable risk. Turkey hosts a key U.S. airbase — Incirlik — near its capital of Ankara. Erdogan has — in 2016 — cut off electrical power to the base temporarily shutting down air operations against ISIS. Incirlik is key to our operations throughout the Middle East.

Trump needs to do something that Obama never did. He needs to make it clear to Erdogan that any interference with the Kurds will be punished as severely as Assad has been punished for using chemical weapons.

Erdogan’s Turkey is not our ally. The president needs to understand this and act accordingly.