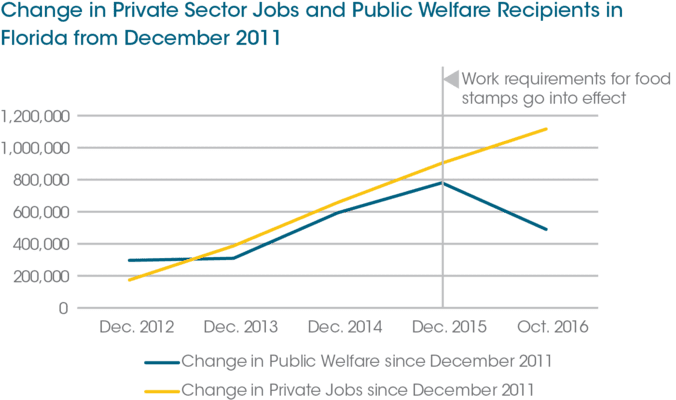 President Ronald Reagan once said that “the best social program is a productive job for anyone who’s willing to work.” The data clearly support Reagan’s claim, which is just as true today as it was in 1982.

According to the U.S. Census Bureau, less than 3 percent of people who work full-time, year-round jobs live in poverty. Even having a part-time job cuts the likelihood of being in poverty in half. Alternatively, nearly 1 in 3 adult Americans under the age of 65 who did not work over the past year live below the federal poverty line. Having a job is the No. 1 predictor of how likely someone is to live in poverty — ahead of family makeup, disability status, race, sex, and education.

There is another point that is just as true as Reagan’s claim — job creation alone is not enough to lower participation in public welfare programs. President Trump understands this. During his inaugural address, he promised to “get our people off of welfare and back to work.”

This is a refreshing refrain, after eight years of misguided policies. Even with steadily improving private-sector job creation throughout President Obama’s tenure, the number of Americans on government assistance continually increased. This is part of a long trend in which policymakers focus on job creation but ignore welfare reform. For example, the number of people dependent on Medicaid has more than doubled over the last 15 years, while food stamps enrollment has grown by more than 150 percent to during that same time. In both programs, which enroll 75 million people and 43 million people respectively, able-bodied adults represent the fastest-growing group.

As Trump and new governors across the United States work to increase economic growth and reduce government dependency, they need to keep these realities in mind.

Florida’s experience over the past few years offers a few important lessons on job creation and welfare reform. As Andrew Brown and I lay out in our recent paper, “Freedom to Prosper: How Florida Promoted Job Growth by Cutting Red Tape,” Gov. Rick Scott’s regulatory reforms in Florida helped fuel the state’s impressive job growth. But more jobs did not translate into smaller welfare rolls until the state reformed its food stamp program.

When Scott took office in January 2011, Florida was in a deep economic hole. In the three years following the Great Recession’s start in December 2007, the state lost more than 900,000 jobs and saw its unemployment rate increase from 3.5 percent to a peak of just over 11 percent.

Despite being one of the states hit hardest by the Great Recession, Florida was leading the nation in economic recovery by 2014. Since 2012, Florida’s job growth rate has exceeded the national job growth rate every year and the state has added over one million private-sector jobs.

At the same time, the unemployment rate in Florida dropped almost six points from 10.7 percent in December 2010 to 4.8 percent in October 2016. This decline was even more drastic than the 4.5 percentage point drop in the overall U.S. rate over that same time.

But even with Florida’s impressive economic turnaround, the number of individuals dependent on government welfare continued to increase. Though this seems paradoxical, it occurred because able-bodied adults were allowed to stay on government assistance for long periods of time, which created a massive disincentive for these adults to find work.

In 2016, Florida began requiring able-bodied adults on food stamps and without dependents to work, train, or volunteer at least 20 hours per week as a condition of continued eligibility. Within 10 months, enrollment among this group had dropped by 85 percent. Evidence from other states indicates that those exiting welfare as a result of work requirements quickly re-enter the workforce and more than double their wages within a year, more than offsetting lost welfare benefits.

Because of these commonsense reforms, total enrollment in Florida’s various welfare programs has fallen by 300,000 individuals since work requirements were implemented while private-sector job growth has continued uninterrupted.

There are still 4.6 million people on welfare in Florida. The key point, however, is that the welfare reforms stopped the increase and the 300,000 person decline in welfare participation was accomplished in just 10 months.

Florida’s experience shows policymakers that successfully moving people out of dependency requires more than job creation. As the Trump administration and new governors work on policies that will promote job growth, the need for welfare reform should rise to the top of their priority lists.