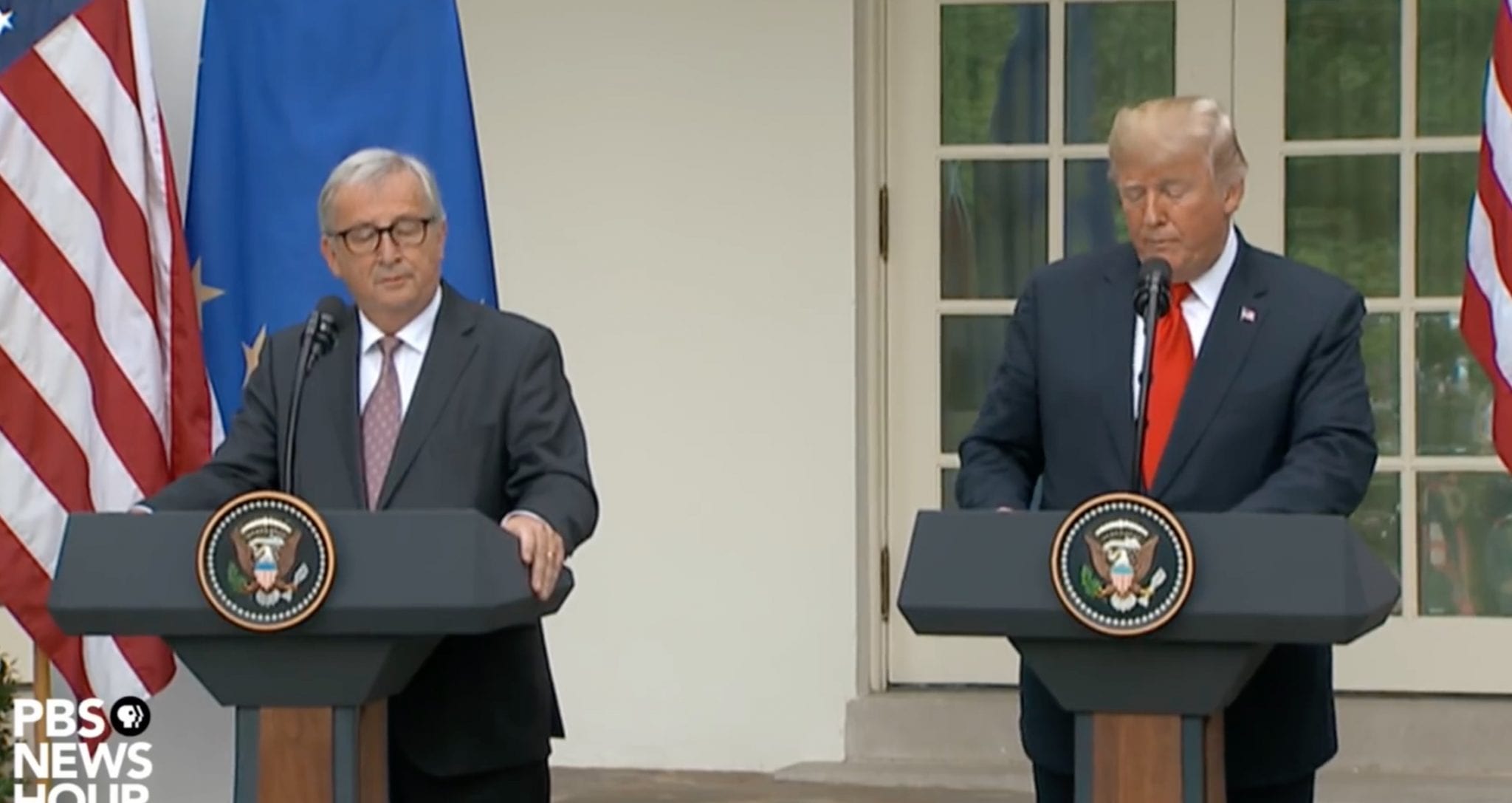 When President Donald Trump hosted European Union President Jean-Claude Juncker at the White House last week to announce trade progress between the two economic superpowers, much of the impact of the deal they struck was oversold — essentially what was announced was a truce after a ramping-up of tariffs as Trump has sought to force open EU markets to American exports.

That overselling is a frequent product of Trump’s tenure in office so far, as he’s recognized the inability of the American legacy media to process complex information and the effect of that inability — not to mention the constraints of time and busy schedules — on the American people. Trump recognizes the opportunity therein, and so he’ll gleefully proclaim that which isn’t quite so when it suits his purposes. In that, he’s a mere piker by comparison to his predecessor Barack Obama — who rarely, if ever, delivered a true statement in public.

But the announcement made by Trump and Juncker contained a nugget of information which might be transformative in its significance both to the American economy and to America’s place in the world. Namely, that the two would work together to promote the sale of American natural gas to the EU.

How? By increasing by 50 percent the number of liquefied natural gas import terminals in Europe. As of today, there are 28 such terminals in EU countries, with plans for 14 more in various states of address. Juncker says those facilities will be fast-tracked, which will make Europe a gigantic depository of LNG from the USA.

The Trump administration has been working on the LNG issue from its end. American regulations governing the granting of export licenses are byzantine and prohibitive, and Trump’s Department of Energy is furiously working to eliminate barriers to create LNG as a major export commodity.

And American LNG riding in supertankers across the pond could displace the Russian variety in European markets, which is no small item of significance and a major aim of the administration.

“An energy policy where we can deliver energy to Eastern Europe, where we are a partner with people around the globe, where they know that we will supply them energy and there are no strings attached is one of the most powerful messages that we can send to Russia,” Energy Secretary Rick Perry said when testifying back in March to the Senate Armed Services Committee.

This should have been a major American trade policy initiative years ago. The shale revolution in this country dates back to the middle of the previous decade, and natural gas from fields like the Barnett and Haynesville Shales has been available in exportable quantities for some time. Slow permitting for export facilities in Texas and Louisiana and a resulting lack of financing have wasted valuable time which could have been used to develop LNG as a profitable export. As such there are only two LNG export facilities up and running in the U.S. at present — Dominion Energy’s Cove Point terminal in Lusby, Maryland, on Chesapeake Bay, and Cheniere Energy’s Sabine Pass terminal in Lake Charles, Louisiana. There will be more on the way, starting with Magnolia LNG’s long-planned Lake Charles facility, as the Trump administration prioritizes LNG exports.

As America ramps up LNG exports with an eye toward breaking out as the world’s largest supplier early in the next decade, the European market will likely become a major battleground — not just between the U.S. and Russia, but between price and politics. If you’ll remember, Trump made major waves at the NATO summit a few weeks ago in castigating Germany as dependent on Russia for its energy needs, and specifically objecting to the construction of the undersea Nord Stream II pipeline which would bypass Eastern Europe, and specifically Ukraine, to deliver Germany natural gas directly from Russia. That pipeline will likely be up and running in a year, and when it is the Russians will be able to supply natural gas at a price of $5.00 MMBtu, or perhaps less, to Western Europe. Natural gas trades considerably cheaper in the U.S. at present — the Henry Hub benchmark price was $2.82 MMBtu on Friday — but with transportation costs it’s unlikely to arrive in Europe for under $6.00.

But the Europeans know where the money is going, and for some it’s worth paying more not to be under Vladimir Putin’s heel. Take Poland, for example, which has been a Russian gas customer since 1944; the Poles have told Russia’s natural gas behemoth Gazprom they’re done buying — Poland isn’t renewing its Gazprom contract in 2022. And shipments of U.S. LNG have already begun arriving in Poland.

Better export infrastructure here and in Europe might trim those transportation costs and make American LNG cost-competitive with Russia. This should have been done sooner, but Trump has made catching up in the LNG trade game a priority and it appears he’s making progress in that regard.

And if we start eating Putin’s lunch on natural gas, it won’t be fun for him — the Russians don’t have much else but oil and gas to sell to capitalist economies. People can only drink so much vodka, after all.

Let’s remember this activity when we’re faced once again with the stupid accusations that Trump is somehow Putin’s puppet.

Give the market time and it will address all evils. If you need proof of that, just look at the bath Facebook was made to take last week as its second quarter earnings report generated almost $120 billion in lost stock value.

Facebook is beginning to lose users thanks to its persistently clumsy attempts to police what its content curators believe is “hate speech” and “fake news” — not to mention a customer backlash against real or perceived abuse of personal information.

It’s not unlikely that the current drop in Facebook stock will result in the sacking of much of the company’s management team, maybe to include its founder Mark Zuckerberg. Zuckerberg looked completely out of his element earlier this year when testifying to Congress about the aforementioned issues, and Facebook has been notably tone-deaf on the First Amendment issue since it was raised by conservatives on Capitol Hill. Ergo, the loss of users, the downturn in advertising revenue, and the swoon in the stock price.

We don’t need government regulation of Facebook. The market works just fine. When someone comes along with another social media platform which captures the public’s attention, you’ll see the market really work its will on Facebook.

No, they aren’t going to change the name of the city of Austin, Texas. There are people suggesting such a thing is evidence of just how far into the social-justice pea patch the cultural-Marxist Left has gone, though.

In Lebanon, the government decided to repurpose several of its outdated armored vehicles by piling them in the Mediterranean about two miles off the coast near Sidon. They’re making an artificial reef with the tanks, and creating what they hope will be a tourist attraction for divers.

So far, so good. But it being the Middle East, the usual stupidity can’t be far away. And it isn’t…

But this is not just an environmental project. The group have also purposefully pointed the tanks towards their southern neighbour, Israel.

According to Mr Kozbar, it was done “out of solidarity for the Palestinian people.”