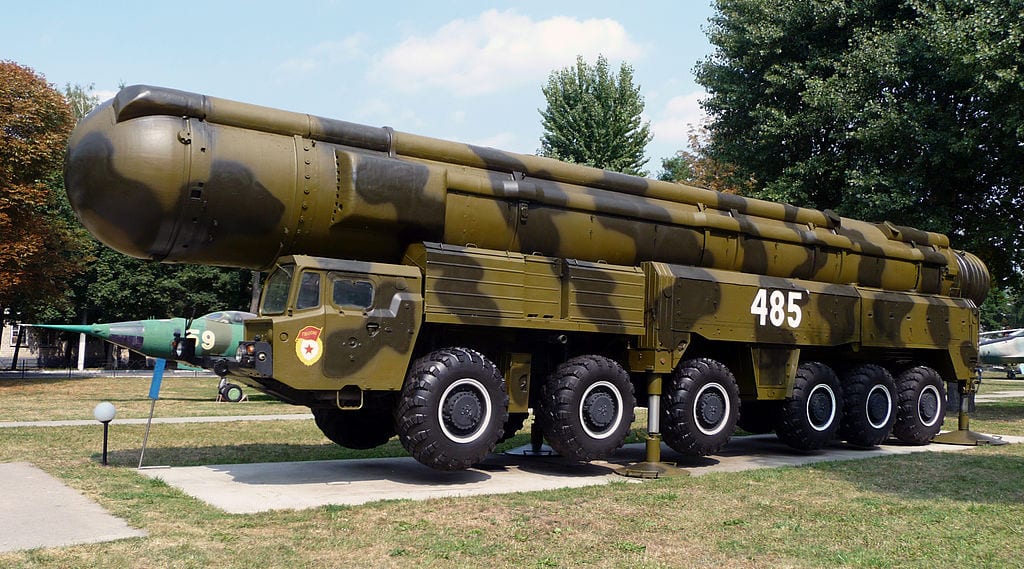 The INF Treaty banned both parties from possessing ballistic or cruise missiles having ranges from 500 to 5,500 kilometers (about 310 to 3,400 miles). It was a good idea in 1987 but recent Russian violations of the agreement have nullified its effect.

Because Trump made his announcement on Saturday, he might have caught the left and their media minions off guard. By today, however, they’ll have recovered.

This morning will probably feature the first “news” stories and punditry about why Trump doesn’t (or shouldn’t) have the power to negate a treaty and how Congress should take over the decision. We’ll hear a lot of hogwash along the line of Trump igniting another arms race.

When President George W. Bush abrogated the ABM Treaty in 2004, he did so pursuant to a provision in that treaty enabling a signatory nation to withdraw from the treaty if it determined that extraordinary events related to the subject matter of the treaty jeopardized its supreme interests. Bush was acting under his constitutional authority as the chief executive of the United States.

The INF Treaty has the same sort of provision. Thus Trump, as president, has the authority to execute the provision in the treaty allowing us to withdraw from it. Congress can’t interfere constitutionally. Nor should it try, because Trump is right.

Russian President Vladimir Putin has, for many years, carefully cultivated his strongman image. In his March speech to his nation, he bragged about new missiles Russia was developing and deploying that would make U.S. missile defenses obsolete. Some of his brags were, literally, science fiction such as his claim to a nuclear-powered missile.

As important, and perhaps more so, is the undercurrent in Russian military planning that we hear of only in small bits and pieces. As Walter Laqueur wrote in his book Putinism, some Russian leaders — not necessarily including Putin — may believe that the U.S. wouldn’t respond to a limited attack on Eastern Europe, even a nuclear strike.

That belief could arise from two facts. First, former president Obama said in 2014 that we had no strategy and no strategic interest in Syria. From that, some in Russia might conclude that we had no such interest in Eastern Europe either. Second, Trump’s frequent NATO-bashing could give rise to that belief regardless of how justified the president’s criticisms are and his frequent statements of our commitment to the NATO Treaty.

Whatever their thinking, the Russians have deployed the “Novator” missile, which is precisely the sort of weapon system banned by the INF Treaty.

Earlier this month Defense Secretary James Mattis told a Brussels meeting of NATO defenses ministers that they should “Make no mistake: The current situation with Russia in blatant violation of this treaty is untenable.” A few days before that, NATO Secretary General Jens Stoltenberg told the same meeting that Russia had, after years of denials, acknowledged its new 9M729 (Novator) missile. He said, “Russia has not provided any credible answers about this new missile. All of the allies agree that the most plausible assessment would be that Russia is in violation of the (INF) Treaty. It is therefore urgent that Russia addresses these concerns in a substantial and transparent manner.”

The dictionary tells us that “Novator” means “innovator.” The missile is an innovator only in the sense of violating the INF Treaty. It is believed to be a ground-launched cruise missile, capable of carrying a nuclear warhead, that has a range within the ban of the INF Treaty. Russia has reportedly deployed two battalions of the Novators, one in southeastern Russia and another at an unknown location. Like its brethren, the Novator is mounted on a mobile launcher and could be relocated easily to threaten Europe.

The Russian reaction to Trump’s announcement is what you’d expect. Russian Deputy Foreign Minister Sergei Ryabkov rolled it up with Trump’s revocation of the Obama nuclear weapons deal with Iran and his more recent action terminating China’s postal privilege agreement (which allows Chinese reduced postage rates for exports to the U.S.).

“The issue is too serious to be dealt with through public debate. If the United States continues to act so clumsily and harshly, as we can see it do on numerous occasions, if it continues to unilaterally withdraw from agreements, different kinds of accords and mechanisms, and the examples are piling up — from the JCPOA on Iran to the Universal Postal Union — then we will have nothing left to do but to take retaliatory measures, including ones of military and technological nature.”

Ryabkov’s statement may have suffered a bit from translation but his meaning is nevertheless clear: Russia doesn’t want any public debate on its violations of treaties. And it wants help from all the critics of Trump’s cancellation of the Obama-Iran nuclear deal (the “JCPOA”) in resisting Trump’s withdrawal from the INF Treaty.

Far more than the Russian missile, Trump is the real “novator” of arms control. Having revoked the JCPOA — which wasn’t, as Obama promised, barring Iran’s path to nuclear weapons — he has now indicated that we will withdraw from the INF Treaty which the Russians were clearly violating. That message will be delivered formally this week by National Security Advisor John Bolton during his trip to Russia.

Withdrawing from the INF Treaty is a good first step. It makes clear that we intend to answer the threats of intermediate-range nuclear-capable missiles being deployed not only by Russia but China as well. China, not a signatory to the INF Treaty, has already developed and deployed a host of short- intermediate and long-range missiles.

We have ground-launched (and air-launched and submarine-launched) cruise missiles, which are either short-range or long-range, not barred by the INF Treaty. We also have the AGM-86D “penetrating” — i.e., probably stealthy — conventionally-armed air-launched cruise missile.

Thus, it’s not apparently necessary for us to counter the Russian threat by developing an intermediate-range cruise missile like the Novator. The president and Mr. Mattis may decide that our current missile assets are sufficient in that regard. What is clearly insufficient are our answer to the Chinese missile threat and our missile defenses.

As I have written many times, our missile defenses are far short of being 100% proof against any ballistic missile attack and can be overwhelmed by a mass attack. One part of the answer is to perform the scientific and engineering tasks necessary to make them far more effective and numerous to meet the threats emanating from Russia and several other nations, particularly China.

The second part is much harder to accomplish. Some of our NATO allies, such as Germany, are reportedly spending more on their own defense but at a snail’s pace. They (like Poland) should —but won’t — agree to deploying American missile defenses on their territories.

European politics are consumed with matters such as the outcome of the Brexit negotiations, immigration, terrorism, and the economic survival of debt-sodden nations such as Italy and Greece. Like the American media, European leaders don’t spend time debating matters of national security. Trump needs to keep up his pressure on them to do so.

The third portion of the answer is to develop, build, and deploy an answer to the Chinese missile threat. That, too, may be at least partially accomplished by a buildup of our missile defenses. Do we need intermediate-range missiles like the Chinese are deploying? Perhaps. The president and Mr. Mattis need to make that decision and act on it now, not in future years when the window of opportunity to play catch-up may have closed.

The final part of the answer is for Trump and his advisors to re-examine the other arms control agreements now in place. Those that are invalidated by events more recent than the agreements should go the way of the INF Treaty or be replaced with treaties that meet today’s circumstances.