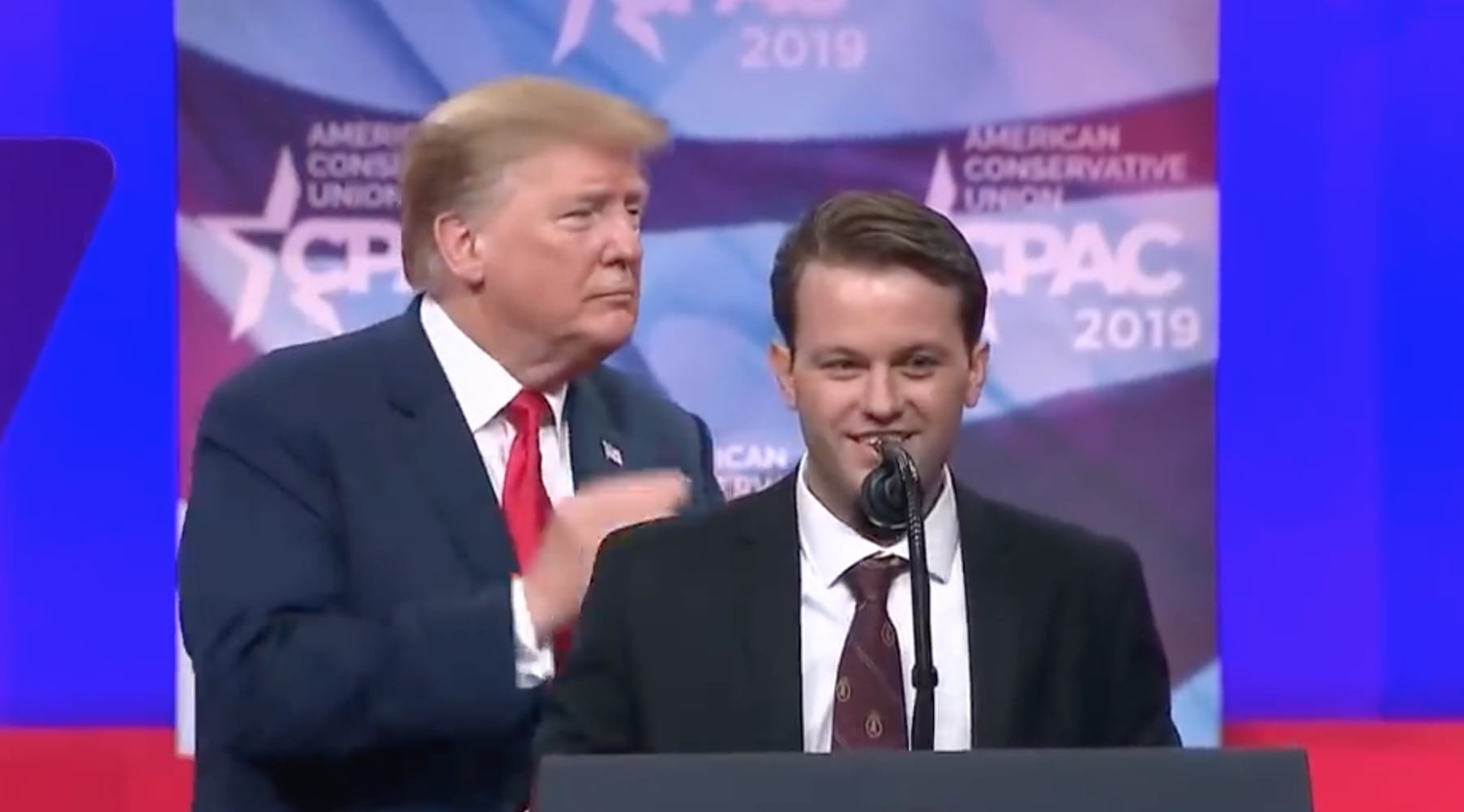 Colleges and universities that limit freedom of speech are about to get clobbered big time. President Trump came out swinging on Saturday against the higher education establishment for violating our nation’s most fundamental value: free expression, guaranteed in the Constitution’s First Amendment.

“I am proud to announce that I will be very soon signing an executive order requiring colleges and universities to support free speech if they want federal research funds,” Trump told the right-leaning Conservative Political Action Conference at their influential annual event.

Then, Trump brought up on stage Hayden Williams, who got punched in the eye last month for expressing his political views while visiting the University of California at Berkeley. The president said, “If they want our dollars, and we give it to them by the billions, they’ve got to allow people like Hayden… to speak.”

Educators lashed out immediately. “This is a solution in search of a problem,” claimed Terry W. Hartle, senior vice president of the American Council on Education. He insisted “free speech is a core value” at universities. Don’t believe it.

Over 90% of colleges and universities restrict speech, according to the Foundation for Individual Rights in Education. Campuses do it by imposing speech codes, empowering bias squads to detect and punish offensive language, and allowing mobs to drive controversial speakers from campus. Some schools even marginalize unpopular groups by cordoning them off in tiny, remote “free speech zones.” Academics forget that the entire United States of America is supposed to be a free speech zone.

Trump is threatening to make campus speech tyranny too costly for universities.

Congress appropriates about $38 billion a year to support research at colleges and universities. That adds up to more than half their total research budgets plus a hefty chunk of their campus overhead funding. Except for the most richly endowed universities, this federal money means life or death.

Trump’s critics claim he lacks authority to steer where federal research dollars go. That’s nonsense. After Congress appropriates, federal departments that report directly to the president, such as Health and Human Services, Defense, Energy, and Agriculture, decide which professors and research teams qualify for grants. These departments already have ample leeway to require applicants and their institutions to support freedom of inquiry and tolerance for diverse opinions.

In short, Trump may not need an executive order. If he decides to issue one, care needs to be taken to avoid concentrating more power in the hands of unelected Washington bureaucrats. After all, Trump won’t always be their boss, calling the shots.

Of course, it would be better yet to get Congress on board favoring free speech and free inquiry on campus, but with the Democrats controlling the House of Representatives that’s unlikely. Democrats are plainly unwilling to vote in support of free anything, except free stuff.

Meanwhile, free speech advocates are using the courts to battle campus oppression. They’re suing the University of Texas for unleashing “bias response” squads to punish students for making so-called derogatory, or offensive comments. The lawsuit alleges the bias squads are having a chilling effect on students’ free speech rights.

Trump’s Justice Department is weighing in on the side of campus freedomin several lawsuits, and so far they’re winning. In December, the University of California settled, agreeing to provide protection for controversial speakers at major events. And the University of Michigan, under litigation threat, agreed to halt its practice of censoring what students can post in their own dorm rooms.

Lawsuits like these are slow and costly. So Trump’s threat to withhold research funds could add a powerful weapon in the fight for free speech on campus. Scientists and engineers eager for federal grant money will not want their goals undermined by campus political correctness.

The real beneficiaries of Trump’s announcement are students and taxpayers. When you send your kids to college, you don’t expect them to be subjected to 24/7 indoctrination in groupthink. And when you pay your taxes, you don’t want the money used to silence and punish people who happen to disagree with the left-wing elite.