Apparently, there will be no honeymoon period with the media for President-elect Donald Trump when he takes office in January. Even if the incoming president is a Republican, the media will adopt a generally polite “wait and see” attitude during the transition. Sure, they’ll remark on people being discussed for the new administration but not much beyond that.

That’s not going to happen this time. Already indignant that Trump blew up the identity politics party they were throwing for Hillary Clinton, the media is ravaging his policy proposals as if he had just been sworn in for his second term.

When the journalists aren’t bemoaning a lack of details in policy that still needs to be fleshed out, they’re exhibiting sudden curiosity about conflict of interest, which they didn’t seem to find problematic when it came to Hillary Clinton and the slush fund she operated while Secretary of State.

The deals underscore the potential conflicts of interest Trump will face after he is sworn in as president on Jan. 20 and his vulnerability to criticism that he is open to foreign influence. Foreign governments could potentially seek to exploit Trump’s business interests to affect his decision making, or to punish him through his pocket book for decisions they object to.

Trump’s transition team declined to comment for this story.

Kudos to the transition team for ignoring a lot of the trolling the media has been doing. The MSM’s treatment of this is almost understandable given that it has been sixteen years since they’ve dealt with a new president who had any semblance of a real job before moving into the White House.

The most ridiculous thing I’ve seen was an NBC News (Surprise!) post from last Friday. Here is a screenshot of the way it was presented in my feed reader: 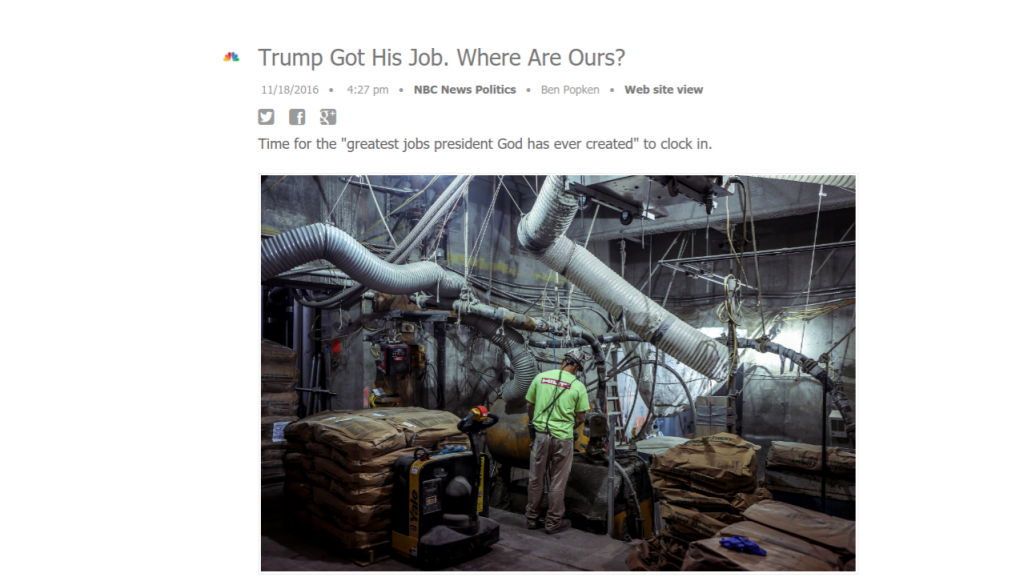 The obvious answer to that question is, “Nowhere, because Barack Obama is still president.”

The actual headline of the article wasn’t as awful but the content left a bit to be desired:

He got the gig. Now it’s time for the self-described “greatest jobs president God has ever created” to clock in.

But they say the “dirty jobs” class of voters who became the symbol — and the ushers — of this unconventional Republican candidate may be disappointed.

Rolling up the sleeves

No matter whether you heard Trump say he’ll cut taxes “bigly” or “big league,” one thing he was clear on was his plan to cut the corporate tax rate from 35 percent to 15 percent. This week, Stephen Moore, a Heritage Foundation fellow and top Trump tax plan adviser, estimated that this and other cuts, plus a new infrastructure spending program, could increase economic growth by a full percentage point. Last quarter, GDP increased at an annual rate of 2.9 percent.

Stagnant economic growth is the real legacy Obama will leave behind. That won’t be noted much on his way out the door as the media has been doing a bang up job of keeping the failures of his economy under wraps while trumpeting every miniscule uptick in an indicator as if it were heralding the return of the dotcom days. If Trump can get some sustained upward movement in economic growth it’ll seem like he emerged from the pages of a JK Rowling novel with a wand. The journalist remain skeptical, however, complaining about vagueness, as if they would be any more on board with scrupulously detailed policy from Trump. If they had more to go on, they’d be busy trying to find friendlies who would tear it all apart.

The press has been scurrying for two straight weeks because they’ve had to deal with the fact that almost everything they’ve been “reporting” for the last 15 months about Trump was wrong. You would think that might make them err on the side of caution when discussing what might happen with policy. When any of Trump’s policies work out in the future, they are going to do this dance again.

If we are lucky, they’ll eventually tire of it and either quit or start doing real reporting again.