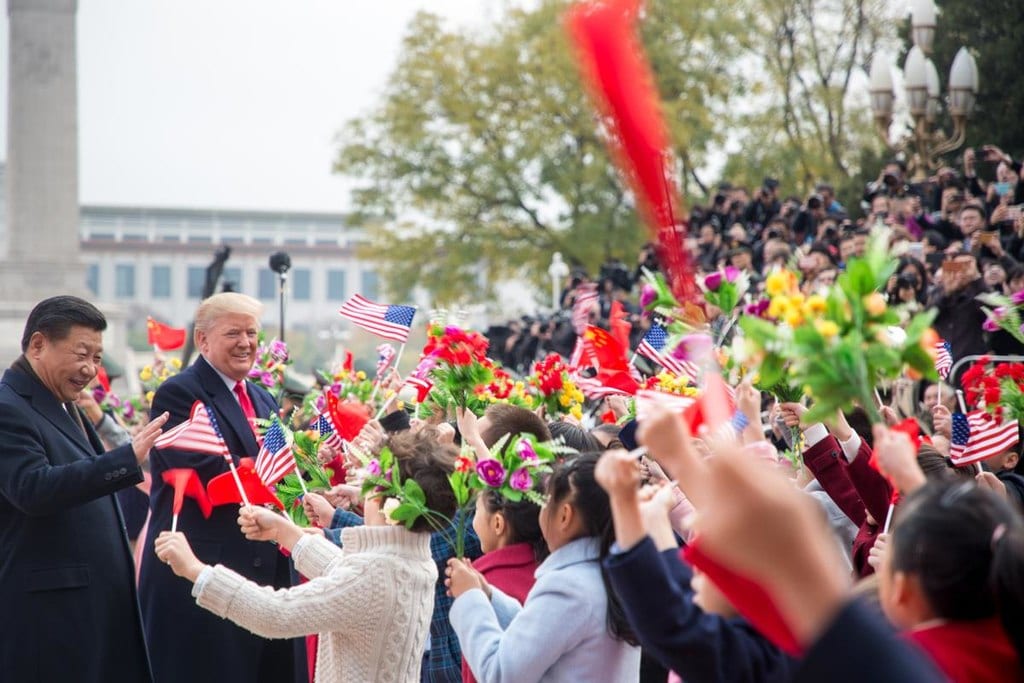 President Trump’s decision to help Chinese telecom giant ZTE “get back into business” sent people on both sides of the aisle to their copies of “The Art of the Deal” to find the chapter on removing the trade death penalty from a company because, as the president tweeted, “Too many jobs in China lost.”

But it’s beginning to look like the president had this planned all along.

Zhongxing Telecommunications Equipment, or ZTE, a Chinese telecommunications company that sells about 10 percent of the cell phones used in America, has had its export privileges to the U.S. denied for seven years — the equivalent of a trade death penalty.

The firm had been punished in March 2017 for selling phone parts to North Korea and Iran in violation of U.S. sanctions. It was fined $1.2 billion, ordered to discipline or fire the employees responsible and given a seven-year suspended sentence of denial of export privileges that could be activated if any aspect of the agreement was not met and/or if the company committed additional violations of the Export Administration Regulations, according to the Department of Commerce.

It paid the fine, but it did not fire all the employees responsible and, in fact, gave some of them raises and bonuses. When the company’s leadership discovered this had happened, it dismissed or demoted the employees it had not previously disciplined and reported the violation to the Department of Commerce.

The Department of Commerce’s response was — without warning, after the problems had been reported and corrected — to unsuspend the sentence and issue a Denial of Export Privileges to the company.

That means 75,000 jobs possibly lost in China, as the president mentioned. It also means job losses in the U.S., where 300 U.S. firms — the largest of which are Qualcomm and Corning — suddenly find themselves banned from doing business with the company for seven years.

As Bloomberg pointed out, the move to help ZTE marked “an abrupt shift from the campaign Trump has mounted against Chinese technology companies, which he regularly accuses of stealing American intellectual property and exploiting unfair trade rules.”

When the trade ban was announced, the president of ZTE said that he could not accept the results — and he hasn’t. Within two weeks, the Chinese government was telling the Trump administration it could not go forward with other trade negotiations until the ZTE issue was dealt with. The company cannot operate without semiconductors made in the United States, so it had shut down.

Since then, the Chinese have offered to import more agricultural products from the United States, cut tariffs on U.S. automobiles sold in China, open its markets for services, allow a merger involving Qualcomm to go forward, and take other steps to help reduce the trade deficit.

David Lampton, director of China Studies at the Johns Hopkins School of Advanced International Studies in Washington, said helping ZTE was “just another example of a very undisciplined policy process, so that every action isn’t necessarily well thought out.” But the bottom line, he said, is “what is the Trump administration prepared to accept? Under what circumstances will it declare victory?”

That seems rather… well thought out … getting an adversary into a negotiating position where you dictate the terms.

And that could be a problem. The question is: Does the punishment of ZTE fit the crime?

When it was caught selling equipment to North Korea and Iran, ZTE was fined $1.2 billion and ordered to fire four employees and discipline and reduce raises to 34 others. It fired the four but did not deal promptly with the 34 others. When this was discovered, the company reported it.

Sen. Marco Rubio, R-Fla., and others have expressed concerns — started by the Obama administration intelligence community — that ZTE’s products pose a cyber espionage threat because the firm is tied to the Chinese government, as are most large firms in the country. The Obama White House also ordered that no ZTE phones be sold on U.S. military bases.

If they want to deny ZTE access to the United States as a trading partner, there are processes for that — and this is not one of them. If there are security-related reasons, let’s go there with all due discretion.

But if this company was shut out of U.S. markets to create a bargaining chip for trade negotiations, a company is punished for turning itself in. Why would any company every do that again?

Financial experts told Bloomberg ZTE most likely will face one of two outcomes. “[The Department of] Commerce may conclude ZTE’s violation is a careless mistake and will lift the ban without additional penalty, or the U.S. agency could suspend the ban temporarily, subject to further investigations and negotiations.”

It termed the second scenario “much more likely,” but the other option seems much more appropriate.