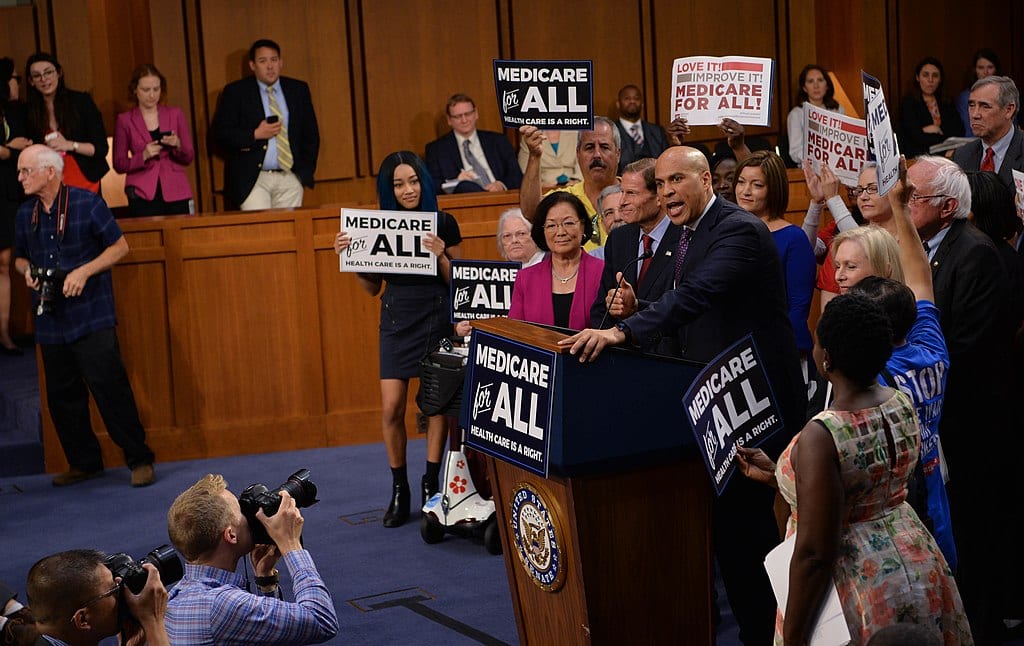 President Trump’s recent declaration in USA Today that Medicare-for-All would “demolish promises to seniors” produced a deluge of denunciations from the Democrats, the media, and the plan’s primary congressional promoter — Bernie Sanders. The latter’s response to the President’s op-ed uses the word “lie” repeatedly and CNN claims Trump’s op-ed “assaults the truth.” But elderly voters should heed the President’s warning about the left’s latest health care brainstorm. Despite disingenuous promises from Sanders and his fellow travelers, it simply isn’t possible to implement their rebranded single-payer proposal without undermining the traditional Medicare program that most seniors rely upon for health care coverage.

But, before we get into the specific damage this ill-conceived program would inevitably cause, it’s useful to pause for a moment and consider that the people making grandiose promises on behalf of Medicare-for-All are the same characters who told us Obamacare would cure the various maladies afflicting American medicine. Remember when they pledged that the risibly titled “Affordable Care Act” was going to reduce health care costs, cover the uninsured, and improve access to care? After eight years beneath the yoke of that misbegotten law, health care is more expensive than ever, there are still 30 million uninsured Americans, physician shortages are steadily worsening, and community hospitals are closing at the rate of one every three weeks.

In other words, the last time the Democrats “fixed” health care, they exacerbated every problem that bedeviled the system. Yet the very people who accomplished that dubious feat are making the same promises on behalf of Medicare-for-All that they made on behalf of Obamacare. Why would any rational voter believe them? Anyone with an IQ exceeding single digits and the energy to spend a little time researching the well-documented failures of single-payer health care will quickly conclude that Medicare-for-All would dramatically increase the aggregate cost of medical care, reduce access to doctors and hospitals, and necessitate stealth rationing. And it will be elderly Americans who feel these negative effects most acutely.

Let’s begin with the cost of Medicare-for-All. Bernie Sanders writes in his response to Trump’s op-ed, “Medicare is the most popular, successful and cost-effective health insurance program in the country.” It’s ironic that Sanders repeatedly calls the President a liar in this piece. This single sentence contains an outrageous falsehood. I literally laughed aloud when I read his claim concerning cost-effectiveness. The most recent Medicare Trustees report indicates that the program is teetering on the brink of bankruptcy. That’s right, the current Medicare program — without any grandiose plan to expand it to all Americans — will go bankrupt in less than ten years if it is not dramatically reformed. This is not a complicated message:

The estimated depletion date for the HI [Hospital Insurance] trust fund is 2026, 3 years earlier than in last year’s report. As in past years, the Trustees have determined that the fund is not adequately financed over the next 10 years.… The Trustees recommend that Congress and the executive branch work closely together with a sense of urgency to address the depletion of the HI trust fund.

Yet the same Democrats who claim they will expand Medicare steadfastly refuse to participate in any sensible plan to prevent it from going broke and vilify any policy maker who proposes such a plan. Remember that video portraying Paul Ryan throwing Granny off a cliff? At present, Medicare covers about 50 million seniors and disabled Americans. This figure will raise the following question in the mind of any voter with a rudimentary grasp of arithmetic: How can we expand a soon-to-be insolvent program that covers 50 million into a Medicare-for-All program that covers more than 300 million? That’s a question that Senator Sanders tends to avoid. This is as close as he comes to answering it in his response to President Trump:

Study after study shows that when we eliminate private insurance premiums, deductibles and co-payments, the average American will pay substantially less for health care than he or she currently pays.… Even the projections from the conservative Mercatus Center suggest that the average American could save about $6,000 under Medicare for All over a 10-year period.

Medicare-for-All will not, however, “eliminate private insurance premiums, deductibles and co-payments.” It will merely force us to pay the money in taxes to the government. And that diversion of funds will add a huge amount of deadweight loss (the harm to economic efficiency associated with a tax) to the overall cost of health care. As AEI scholar Christopher Conover points out in Forbes, the Sanders plan comes with a hidden cost of $1,900 to $3,400 per U.S. resident or $7,700 to $13,600 for a family of 4 (per year). In other words, even after subtracting the $6,000 allegedly saved by the average American, Medicare-for-All would still weigh him down with an added cost of at least $13,000 ($19,000-$6,000) over that 10-year period.

And it gets worse. Sanders’ reference to the Mercatus Center (which is libertarian, by the way) leaves out its most important projections. Charles Blahous, the Senior Research Strategist who authored the study, writes, “The Medicare-for-All Act would under conservative estimates, increase federal budget commitments by approximately $32.6 trillion during its first 10 years of full implementation (2022–2031), assuming enactment in 2018.” And that projection gives the Sanders plan the benefit of the doubt by accepting his wildly optimistic claim that health care providers will be able to remain solvent on payment rates 40 percent lower than those currently paid by private health insurance carriers. How much will that cost the taxpayers?

[D]oubling all federal individual and corporate income taxes going forward would be insufficient to fully finance the plan.… Such an increase in the scope of federal government operations would precipitate a correspondingly large increase in federal taxation or debt and would be unprecedented if undertaken as an enduring federal commitment.

And this, remember, is based on conservative estimates of the program’s cost. According to Blahous, “It is likely that the actual cost of [Medicare-for- All] would be substantially greater than has been estimated from its legislative text.” As President Trump predicts, if payment rates to doctors and hospitals are actually held to the abstemious levels stipulated by the bill’s language, “Doctors and hospitals would be put out of business. Seniors would lose access to their favorite doctors. There would be long wait lines for appointments and procedures. Previously covered care would effectively be denied.” This is not, as Sanders would have it, a “lie.” It will be an inevitable consequence of the laws of economics — supply and demand.

Which brings us back to the inevitable effects of Medicare-for-All: Dramatic increases in the aggregate cost of care, reductions in access to providers, and rationing. Why will seniors feel these effects more acutely than other Americans? They use more health care and tend to be more expensive to treat. If a physician gets paid about the same amount for treating healthy young patients as he gets paid for seniors, he will start turning away the latter. This is called “stealth rationing” and it is a common feature of all single-payer systems. Seniors will have to seek primary care in hospital ERs, the most expensive health care anywhere. President Trump is right. Medicare-for-All would be outrageously expensive, ageist, and immoral.

David Catron
Follow Their Stories:
View More
David Catron is a recovering health care consultant and frequent contributor to The American Spectator. You can follow him on Twitter at @Catronicus.
Most Popular
1
The Right Prescription
Jan. 6: Seven Democrat Lies
by David Catron