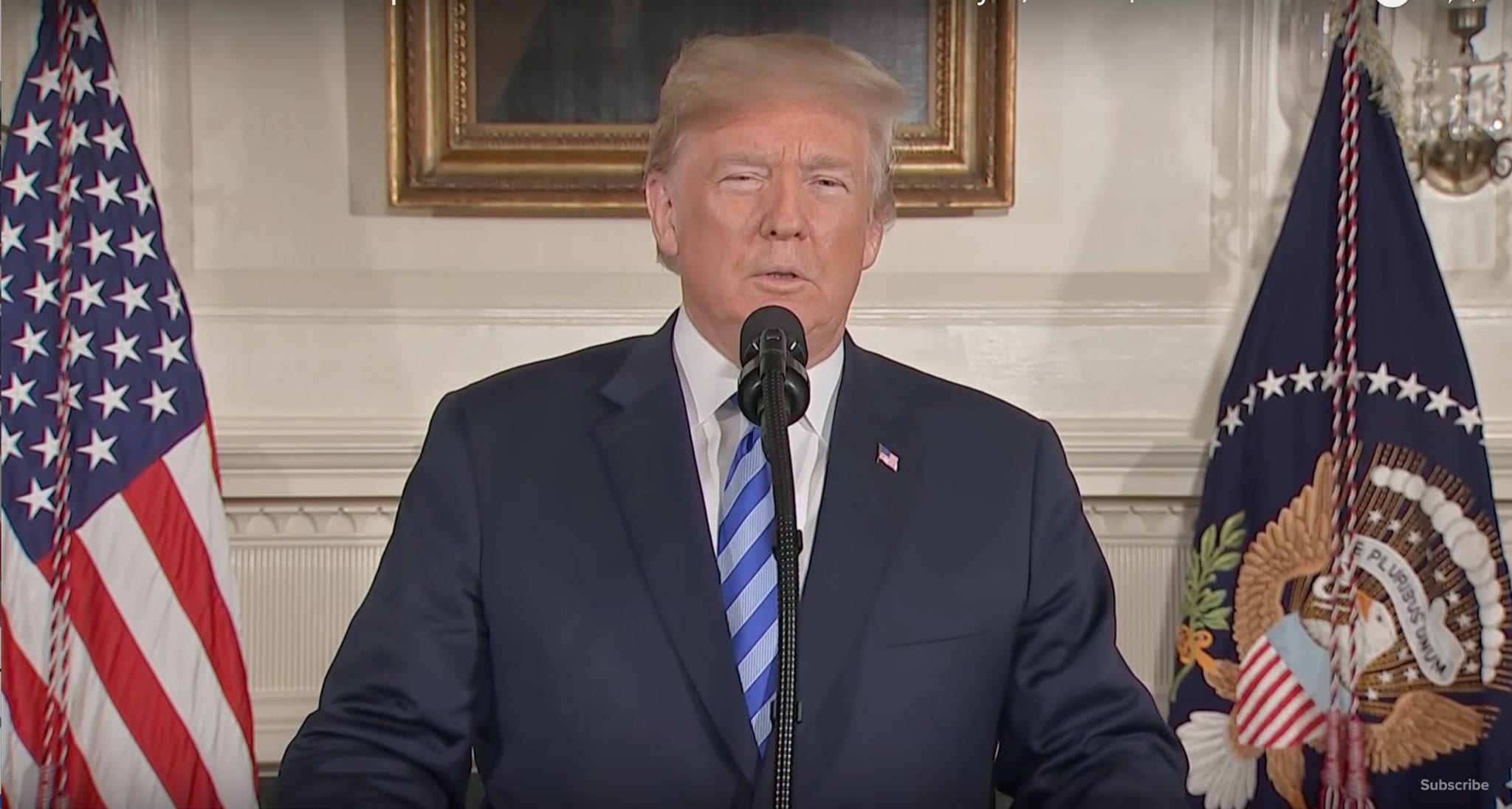 In the most important national security and foreign policy decision of his presidency to date, President Trump announced Wednesday that America was withdrawing from the 2015 nuclear weapons deal that former president Obama entered into with Iran, China, Russia, Britain, France, and Germany.

President Trump’s withdrawal from the deal went against the fervent advice he’d received from Britain, France, and Germany, tossed aside six years of arduous negotiations that former president Obama had undertaken with Iran, and angered the Tehran regime. But those aren’t the only reasons we should applaud what the president did.

In his Wednesday speech, the president summed up many of the reasons that the deal had to be canceled and should never have been made. Trump recited the reasons why he has rightly condemned the Obama deal during and since his 2016 campaign.

Referring to the mass of secret information that the Israelis had smuggled out of Iran, Trump pointed out that the Iranians have been lying blatantly and consistently, saying that they’d never pursued the development of nuclear weapons. As Israeli Prime Minister Netanyahu publicized last week, Iran’s “Project Ahmad” was, for years, funded and fully supported by the ayatollahs for precisely that purpose.

The president said that the sunset provisions of the agreement — it expires in 2025 — will leave Iran with the ability to quickly resume its pursuit of nuclear weapons. He didn’t, however, mention that last month the head of the Iranian nuclear energy agency said that they’d be able to resume uranium enrichment within four days of an order to do so. The fact that they could do so means that Iran hasn’t lived up to its principal obligations under the “Joint Cooperative Plan of Action,” the formal name of the agreement.

Trump listed other obvious points, such as the fact that the JCPOA makes no mention of, and places no limitations on, Iran’s ballistic missile development. Iran has already developed ballistic missiles that could deliver nuclear weapons to any spot in the Middle East and as far as Europe.

Trump said, again stating the obvious to all who are willing to see the facts, that Iran is the principal state sponsor of terrorism — the Obama agreement resulted in no reduction of its terrorist activities. In fact, by paying billions into the ayatollahs’ coffers, we — and the other parties to the deal — have paid for much of that activity.

The president made the point that under the deal, inspection of Iranian nuclear sites is absurdly limited to exclude its “military sites.” Those sites are where the heart of Iran’s nuclear weapons development program is carried out.

With considerable precision, the president said that the agreement didn’t bring calm, didn’t bring peace, and never will. He said the “decaying and rotten structure of the current agreement” was a problem that can only be solved by withdrawal.

The president sent a strong message to North Korea, saying that America “no longer makes empty threats.” He said that America will not be held hostage to nuclear blackmail.

The president signed an executive order that will reimpose strong economic sanctions on Iran in ninety days, allowing U.S. and foreign companies that amount of time to exit from any contracts that they have with Iran. Exiting the room to the shouted questions of reporters — “will that make America safer?” — the president held up the order he just signed, saying, “This will make America safer.”

The reactions to Trump’s actions in the next days, weeks, and months are entirely predictable. All of the deal’s proponents, Iran, Russia, China, Turkey and the rest of our adversaries both foreign and domestic, will condemn what the president did, saying that he has brought the world closer to war. Obama issued a statement saying that Trump was damaging our credibility with the world. Iranian President Rouhani said they would increase uranium enrichment.

Our EUnuch “allies” have said they are still committed to the Obama deal and encouraged Iran to live up to its requirements. They will scream bloody murder that Trump is unreasonably punishing the EU companies that are making billions trading with Iran. None will promise to invest more in their own defense. Nations of shopkeepers have no standing to complain.

The Dems in Congress and a lot of Republican squishes (such as Sen. Bob Corker, who shepherded the Obama deal through Congress) will condemn Trump as a madman, saying that his actions were totally unjustified and — echoing the Iran-Russia-China crew — that he made war probable and imminent.

The only serious question is, what comes next?

Putin’s Russia has already said that it would try to renegotiate the deal with Iran, inviting the EUnuchs to join in. They will demand that the re-imposition of sanctions be delayed until they do so. Trump has already indicated that the sanctions will go back into effect in three months, so that’s a non-starter.

The UN — which sprinkled Security Council holy water on the Obama deal — will meet in yet another emergency session and condemn Trump’s action, saying that the UNSC action has the effect of international law, so Trump’s action is ineffective. These people don’t care that the agreement was never ratified as a treaty by the U.S. Senate so — pace, little Bobby Corker — it had no standing under the U.S. Constitution other than a revocable presidential agreement.

What Iran does will be far more important.

Iran is on the brink of war with Israel over Iran’s bases in Syria. It delayed starting a big fight until Trump acted, so it could ignite that war or it could order its Lebanese proxy — Hizballah — to start launching missiles at Israel. I’m betting it won’t because the Israelis are as ready as they can be for either fight, and although Israel may suffer great losses, they will win that war.

Much more likely is that Iran will continue its nuclear weapons and missile development and accelerate it as much as it can. The president said, as every president since George H.W. Bush has said, that Iran will not be permitted to obtain nuclear weapons. It appears that he meant what he said and — unlike his predecessors — is willing to take action to make his words stick.

We have a lot of options that are just short of war. We should undertake serious cyber-attacks against Iran aimed at crippling its nuclear and missile programs and its military and terrorist actions. The only known previous cyber-attack — the Stuxnet attack in 2007 — caused Iranian uranium centrifuges to run out of control, damaging a great number of them. By now, we know how to do a lot more and should press on with those operations.

The president made it clear that the Iranian people are oppressed by the Iranian kakistocracy. Our intelligence community should be pressed hard to support Iranian revolutionaries with money, technology, and arms, to overthrow the regime.

As I have written often, Iran’s is a revolutionary regime. It is bound by its ideology to forcibly spread its revolution around the world. It is not susceptible to deterrence, as was the Soviet Union and Russia and China still are. It won’t give up its nuclear and missile pursuits peacefully, nor will North Korea with whom the Iranians are working in partnership.

We are faced with the necessity of replacing both regimes one way or another. Regime change may be the most politically charged term of our time, but it is time to face the necessity and do what needs to be done.