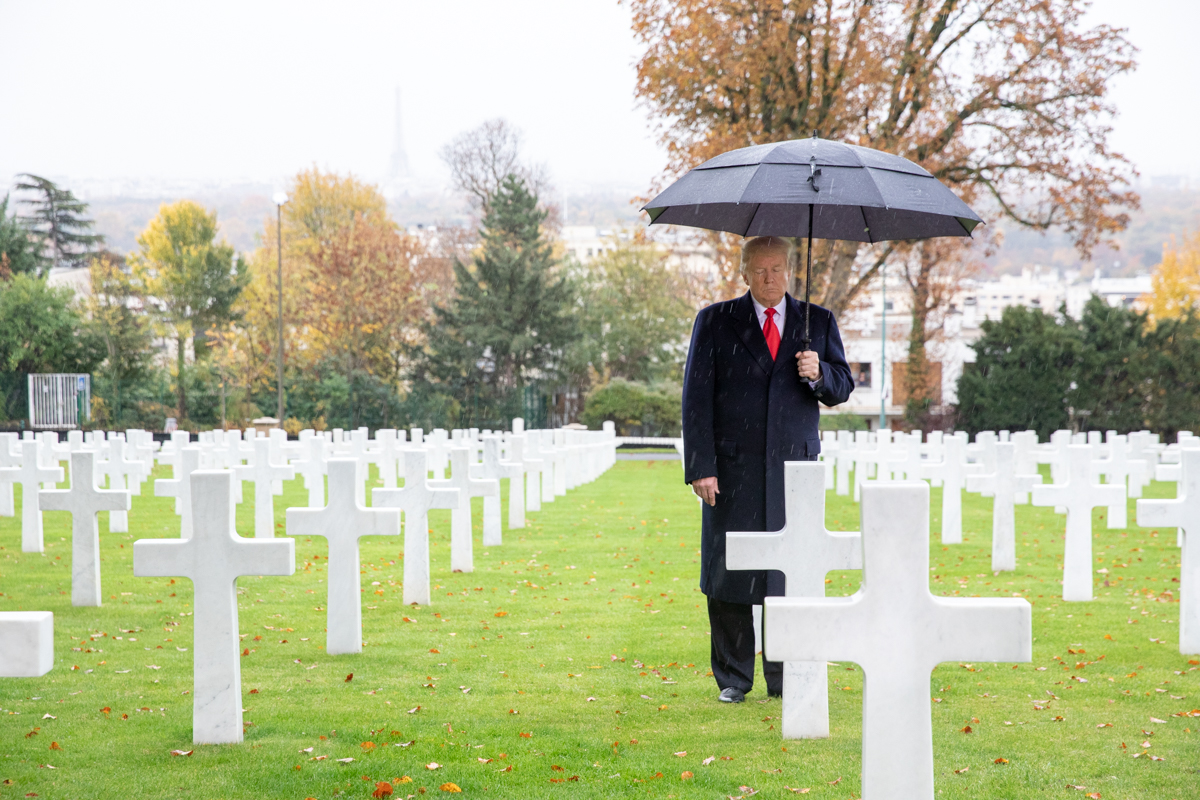 Jeffrey Goldberg, the Atlantic’s Trump-hating editor-in-chief, claimed in a September 3 article that President Donald J. Trump dissed 2,289 American GIs buried at a World War I graveyard in France on November 10, 2018. Why? According to Goldberg, Trump avoided the Aisne-Marnes American Cemetery because, the president allegedly said, “it’s filled with losers,” and the Doughboys interred there are “suckers.” Goldberg also asserted that “Trump rejected the idea of the visit because he feared his hair would become disheveled in the rain.”

The night that Goldberg’s story broke, the president poured ice water all over it. He vehemently denied Goldberg’s tale and called it a “total lie. It’s fake news. It’s a disgrace.”

“I was ready to go to a ceremony,” Trump told journalists at Joint Air Base Andrews, immediately after returning to Washington from a trip to Pennsylvania. “But the helicopter could not fly … because it was raining about as hard as I’ve ever seen. And, on top of that, it was very, very foggy.” The Secret Service would not transport Trump by motorcade, he added, since “it was a very long drive.”

The Secret Service also raised logistical and security concerns. The U.S. commander-in-chief’s movements would have to have been synchronized with police departments from Paris to Château-Thierry, a 90-minute-minimum drive northeast. And if circumstances required Trump’s swift extraction from France, the president and his party could have been pinned down on two-lane country roads.

So what evidence backs each story?

Goldberg and the Atlantic invoke “four people with firsthand knowledge of the discussion that day.” They all are anonymous. Their roles, in the president’s entourage, if any, are unstated. Goldberg and the Atlantic do not even place these “sources” in France at that time. Since publishing this story, Goldberg and the Atlantic have not persuaded any of these nameless personages to show his face, nor have they produced even one new source to bolster these vicious claims. Like a parched lawn, this new story has not grown even a quarter inch in 12 days.

In stark contrast, 16 named members of President Trump’s Paris party have stepped forward to corroborate him. Trump can point to quadruple the grand-total number of sources in the Atlantic story. Trump’s sources have names. Goldberg’s don’t. Team Trump also presents two unnamed authorities whom the White House partially identified by their offices and job titles.

Here are the 16 named sources who reinforce President Trump in this controversy:

• President Trump’s surprise witness is former national security adviser John Bolton. Since getting booted on September 10, 2019, Bolton has become one of Trump’s most severe critic.

No matter. Bolton told Fox News, “I didn’t hear either of those comments or anything resembling them. I was there at the point in time that morning when it was decided that he would not go. It was an entirely weather-related decision and, I thought, the proper thing to do.”

Pages 241–42 of Bolton’s 577-page anti-Trump doorstop, The Room Where It Happened, released June 23, turns Goldberg and the Atlantic’s story into a journalistic Verdun.

“The weather was bad, and [White House Chief of Staff John] Kelly and I spoke about whether to travel as planned to the Château-Thierry Belleau Wood monuments and nearby American Cemeteries, where many US World War One dead were buried,” Bolton wrote. “Marine One’s crew was saying that bad visibility could make it imprudent to chopper to the cemetery…. If a motorcade were necessary, it could take between 90 and 120 minutes each way, along roads that were not exactly freeways, posing an unacceptable risk that we could not get the President out of France quickly enough in case of an emergency.”

Fifteen other named sources who were in France echo Trump and Bolton.

• “The Atlantic story is not true,” First Lady Melania Trump declared. “It has become a very dangerous time when anonymous sources are believed above all else, & no one knows their motivation.”

• Former counselor to the president Johnny DeStefano said, “I was on this trip. The Atlantic bit is not true. Period.”

• “I did not hear POTUS call anyone losers when I told him about the weather,” former Deputy White House Chief of Staff Zach Fuentes revealed to Breitbart. John Kelly’s then-top aide added, “Honestly, do you think General Kelly would have stood by and let ANYONE call fallen Marines losers?”

•  “These are disgusting, grotesque, reprehensible lies,” wrote former deputy press secretary J. Hogan Gidley, now Trump–Pence 2020 spokesman. “I was there in Paris and the President never said those things. In fact, he would never even think such vile thoughts because I know from firsthand knowledge that President Trump absolutely loves, respects, and reveres the brave men and women of the United States military.”

•  “Again, this is 100% false,” former personal aide to the president Jordan Karem stated. “I was next to @POTUS the whole day! The President was greatly disappointed when told we couldn’t fly there. He was incredibly eager to honor our Fallen Heroes.”

•  “I was with the President the morning after the scheduled visit,” said Staff Secretary Derek Lyons. “He was extremely disappointed that arrangements could not be made to get him to the site and that the trip had been canceled. I have worked for the President for his entire administration…. I have never heard him utter a disparaging remark, of any kind, about our troops.”

•  “I was at the Aisnes-Marnes American Cemetery awaiting the arrival of President Trump,” retired Maj. Gen. William M. Matz wrote in a detailed statement. “As a former Army infantryman who has flown on many helicopters, I knew that morning that the weather was bad and the ceiling was too low for a safe landing that day. When the President’s visit was appropriately canceled due to weather, I received word also that he was upset he would not be able to make the wreath-laying visit and pay his respects to the 2,300 fallen soldiers and Marines interred there.” Matz added, “Those who know President Trump know that the anonymous smears peddled by The Atlantic have no basis in fact or reality, and do a terrible disservice to journalism and to our veterans, living and deceased.”

•  “In my presence, POTUS has NEVER denigrated any member of the U.S. military or anyone in service to our country. And he certainly did not that day, either,” said U.S. Ambassador to France Jamie McCourt. “Let me add, he was devastated to not be able to go to the cemetery at Belleau Wood. In fact, the next day, he attended and spoke at the ceremony in Suresnes in the pouring rain.” Just west of Paris, Suresnes American Cemetery is the final resting place for U.S. soldiers who made the ultimate sacrifice in both world wars.

•  Senior adviser Stephen Miller slammed the Atlantic’s piece as a “despicable lie.” He told the Washington Examiner, “The president deeply wanted to attend the memorial event in question and was deeply displeased by the bad weather call.”

•  “I’ve been with this President now for coming on four years,” Secretary of State Mike Pompeo told Fox & Friends on September 4. “I’ve never heard the President use the language that assertedly is said in that article about him calling the military suckers and losers. I’ve never seen that. Indeed, just the contrary; he has always had the deepest respect.”

•  “The Atlantic story on @realDonaldTrump is total BS,” said former press secretary Sarah Huckabee Sanders. “I was actually there and one of the people [who was] part of the discussion – this never happened.”

•  “I was with POTUS in France, with Sarah, and have been at his side throughout it all,” said Assistant to the President Dan Scavino. “Complete lies by ‘anonymous sources’ that were ‘dropped’ just as he begins to campaign (and surge).”

•  Former Deputy Chief of Staff Dan Walsh said, “I can attest to the fact that there was a bad weather call in France and that the helicopters were unable to safely make the flight. Overall, the President’s support and respect for our American troops, past and present, is unquestionable.”

Beyond these 16 named sources, two others are nameless, but on the record and described by their professional positions.

•  An email stamped 5:59 a.m. that day, from a “United States Marine Corps Military Aide to the President,” whose name the White House redacted, reads, “Team, We are BAD WX call for today’s lift. COS [chief of staff] Gen Kelly, will motorcade and replace POTUS for today’s ceremony.” 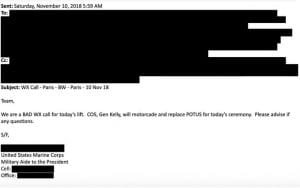 This military aide’s email dovetails perfectly with this statement provided to me from the White House Military Office:

•  “In November 2018, during the President’s visit to France, the Military Office recommendation to the President’s Staff was to cancel the Marine One lift to Belleau, France, due to the safety concerns posed by poor weather conditions that would have been in place for the duration of the President’s planned trip,” said a senior official in the White House Military Office. “Once the helicopter lift was cancelled the collective group recommended to not motorcade based upon timing, logistics, and available assets.”

In light of this abundant counter-evidence, Jeffrey Goldberg told CNN this about John Bolton’s account of these events: “I am sure all of those things are true.” Goldberg also acknowledges the gross inadequacy of defaming President Trump’s character based on supposed sources too gutless to identify themselves by name or at least job description. (Goldberg said they demanded anonymity because “They don’t want to be inundated with angry tweets, and all the rest.”) Goldberg conceded to MSNBC’s Chris Hayes on Labor Day, “I share that view that it’s not good enough.”

Goldberg’s confession of his deep professional shortcomings is not good enough. Henceforth, journalism professors should hand his rebarbative article to their students and say, “Don’t do this.”

For now, three things must happen for justice to emerge from l’affaire Atlantique:

First, the Atlantic should retract Goldberg’s “bombshell” story, which swiftly dissolved into a sopping-wet book of matches.

Third, Jeffrey Goldberg should resign as editor-in-chief of the Atlantic.

Deroy Murdock is a Manhattan-based Fox News contributor, a contributing editor with National Review Online, and a senior fellow with the London Center for Policy Research.