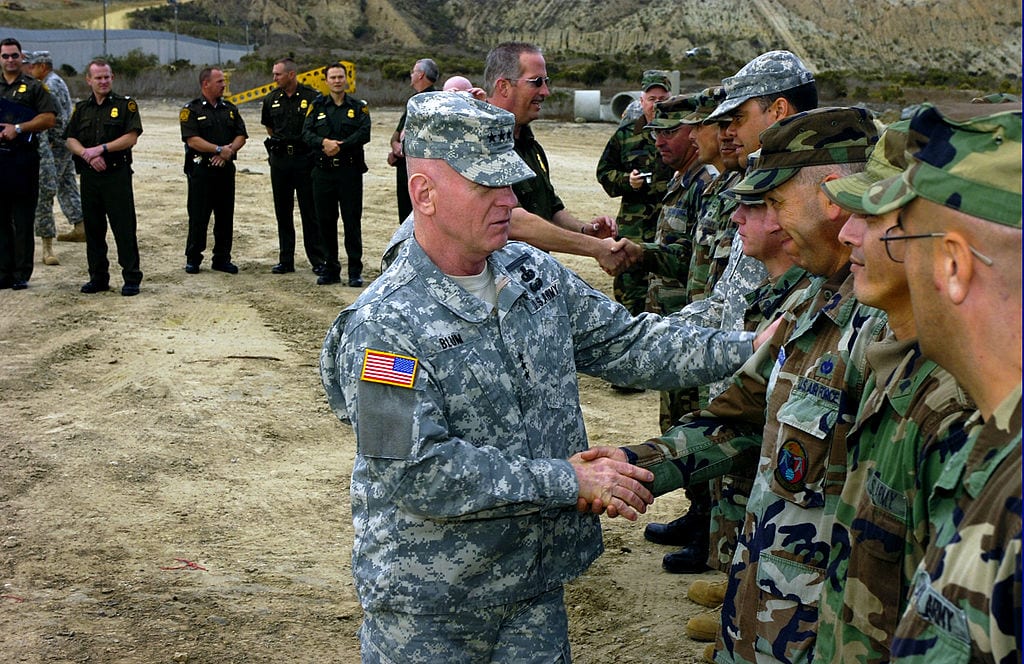 If anyone isn’t frustrated with Congress, they’re not paying attention. President Trump’s frustration with its failure to act on immigration and on building his border wall — the most central promise of his campaign — resulted in his declaration last week that National Guard troops will be stationed on our southern border until the wall is built.

Part of the president’s frustration is self-imposed. He signed the awful $1.3 trillion spending bill that barred funding for the border wall (allowing only repairs to existing fencing). It also barred him from imposing financial penalties on states and cities that proclaim themselves sanctuaries for illegal aliens and refuse to cooperate with federal law enforcers trying to enforce the existing laws.

The immediate cause of the president’s action last week was the “caravan” of illegal aliens walking through Mexico with the avowed intention of crossing the U.S. border illegally. Reacting to that, the president said he would put troops on the border and would punish Mexico by renegotiating the North American Free Trade Agreement (NAFTA), something he also promised to do during the campaign. In reaction to the president’s statements the caravan, reportedly comprised mostly of economic refugees from El Salvador, dissolved. Most if not all of the people from El Salvador will remain in Mexico.

On April 6, the president issued a memo instructing the Department of Defense to deploy National Guard troops to assist the Department of Homeland Security in protecting the border. In it, the president wrote, “Our American way of life hinges on our ability as a Nation to adequately and effectively enforce our laws and protect our borders. A key and undeniable attribute of a sovereign nation is the ability to control who and what enters its territory.”

The president invoked his authority under Title 32 of the U.S. Code to deploy the troops. Under Title 32, the troops will have to be called up by a state governor before they can be deployed. They will remain under state command but their pay will come out of the federal defense budget.

Defense Secretary James Mattis issued a call-up for as many as four thousand National Guard troops. The states have only begun to mobilize a small number of troops. Two states — Texas and Arizona — have already begun to call up National Guard forces. So far, only four hundred have been called up. More may come later, but some states — California and Oregon among them — have already refused to call up any troops.

As always, we have to ask what mission will the troops perform? At this stage, it’s clear that we aren’t going to create a human wall where no steel and concrete barrier exists. To avoid violating the Posse Comitatus Act, the troops will not be assigned law enforcement duties but they will free up Border Patrol and Immigrations and Customs Enforcement (“ICE”) agents to operate on the border. The National Guard troops will also operate drones to spot and help interdict illegal aliens in the act of crossing the border.

This follows the precedents set by Presidents Bush and Obama in 2006 and 2010. On both of those occasions, troops were sent to the border for periods of months.

Because the president said he’d keep troops on the border until the wall is built, backing down on that commitment would be a confession of failure. Congress is going to appropriate the $25 billion to build the wall shortly after hell freezes over, so the troops will have to remain at least until the next presidential election.

That’s going to cost billions of dollars. President Bush’s operation sent six thousand troops to the border in 2006-2008 at a cost of $1.3 billion. President Obama’s mission sent twelve hundred troops there from July 2010 to June 2011 at a cost of about $110 million.

Sending four thousand troops to the border from 2018 to 2020 will cost at least $1 billion.

The $80 billion increase in defense spending included in the omnibus spending bill the president signed is money desperately needed to improve readiness of all of the armed forces. As I’ve written many times, readiness is a shambles. Just as an example, over seventy percent of Marine F/A-18s can’t fly combat missions because they’re worn out. The Air Force and the Navy are doing better, but not by that much. The Air Force is two thousand pilots short of its requirements.

Illustrative of the readiness crisis is a statement by Marine Commandant Gen. Robert Neller on January 25. Neller said, “Right now, we’ve got too damned many [F/A-18] Hornets. We’ve got too many airplanes. We have to get rid of them because we don’t have time to fix them. You just have got to get rid of them. We need more airplanes that can fly.”

The Marines are unable to fly the missions they need to fly because they don’t have aircraft capable of doing so. Neller’s plea of desperation stemmed from that fact alone. No one is talking about scrapping the Marine F/A-18s that can’t fly and replacing them with new aircraft.

It will take tens of billions of dollars — and at least two or three years — to fix the Marines’ and other services’ readiness problem.

Both the cost of the troops at the border and the repair to aircraft has to come from the “Operations and Maintenance” account in the Pentagon budget. Both are essential, but however much money you use for one isn’t available for the other. It’s a choice the services shouldn’t have to make. And there’s more.

President Trump also said that he wanted to use Pentagon funds to build the wall. But he can’t. My pal Dave Patterson served as deputy Pentagon comptroller and knows how little flexibility there is in Pentagon spending.

As Dave Patterson explained, the Defense Department cannot use money for any purpose other than that for which it was appropriated, and the appropriations are made specific to particular programs. If the president wanted to take $25 billion out of the O&M funds to build the wall he would have to get congressional approval to “reprogram” that amount of money for that purpose. It’s too large an amount for the president or Secretary Mattis to reprogram themselves.

Even if the president doesn’t, Mattis understands how desperate the services are for money to increase readiness from the parlous state it’s in. He would certainly object to taking $25 billion out of his O&M budget to build the wall. All the other line items in the DoD budget are already committed to be spent in other ways.

Congress will neither fund the wall nor fund more border patrol agents to stem the tide of illegal immigration. It won’t make the essential changes to immigration law such as ending chain migration.

Thanks to Republican weakness and Democratic obstructionism, the president can’t get the money or the legislation to do what is needed. So the troops will remain on the border for the foreseeable future until the state governors end their deployment.

After this November, with the near certainty of Republican losses in both houses of Congress, the border crisis is only going to get worse.