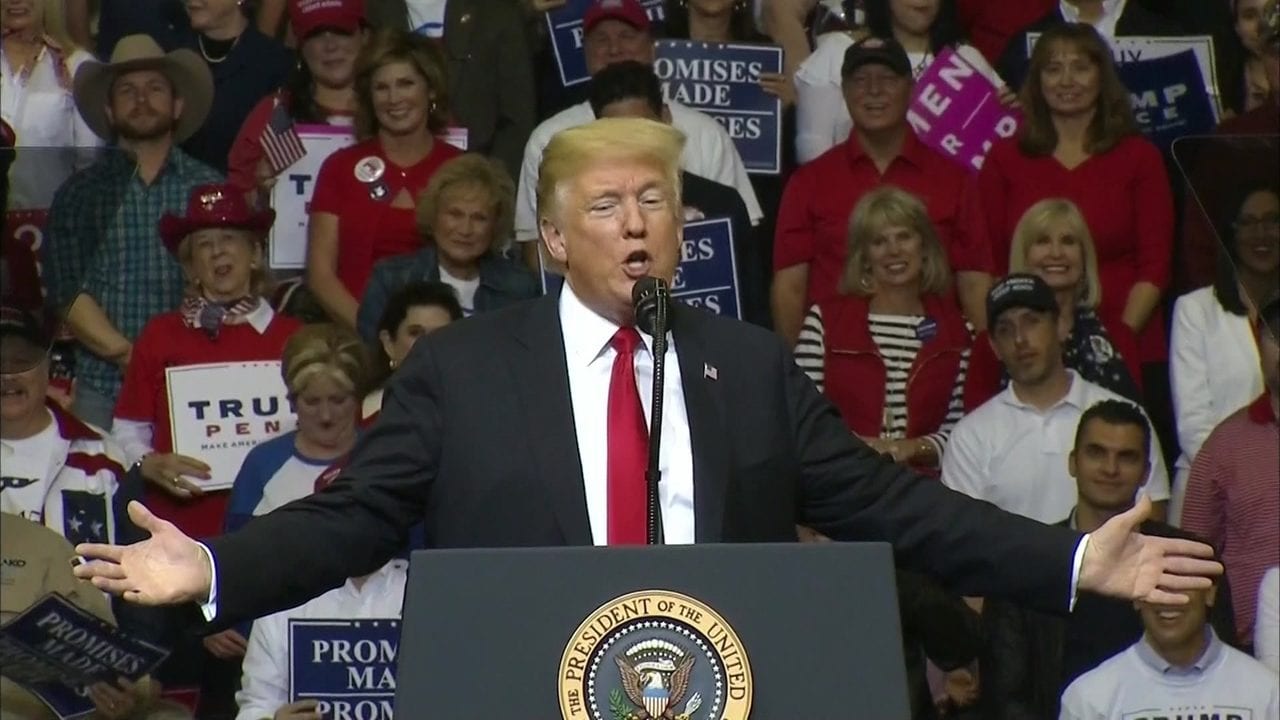 If Donald Trump’s good humor infects even the most sober of politicians, his ebullience positively electrifies crowds. Tonight, Houston is electrified. Jolted, energized and best of all, enjoying itself on the way into one of the tightest midterm elections ever. Win or lose, the Cruz Crew and the Trump acolytes are have a grand old time.

Who doesn’t want to be part of the party? It’s fun. It’s infectious. After eight dour years of being told to accept the inevitable, Trump’s entrée into the political sphere is like the dawning of the sun. His head is a yellow mop of crowning glory, catching the light and casting him in a golden glow. He looks slyly at the crowd. He grins. Everyone is in on the joke and the people all the way back in the cheap seats chant with glee.

Oh, the theater of it. Donald Trump pauses here. Jokes there. Gravely intones and then bursts with self-aware irony. The media grumps along, willfully not getting the punchline, and fretting over something inconsequential.

Will Trump get the Texas dam that Governor Abbott requested named after him? No doubt, some journalist is furiously writing about the horror du jour this instant. The people roll their eyes and play along. And, what if the dam is named for Trump? Everyone is picturing the Hoover Dam in their minds except with the huge gold Trump insignia plastered on the front of it. That idea alone is amusing and the people laugh.

Isn’t everyone tired of being so dad gum bleak all the time? Aren’t the words of woe wearying? Barack Obama promised Hope and Change but they were empty slogans. His speech in Colorado, the one with the pretentious columns, was the pinnacle. After that, it was all drearily delivered sloganeering and the only change was more misery.

Since the media won’t tell Americans the real change that has occurred, President Trump does it himself. He listed the economic numbers. The Houston crowd especially enjoyed the fantastic job numbers for Hispanics. There were a lot of Hispanic Trump supporters in attendance.

On the way back to Houston from DC last Friday, the man sitting next to me was a Mexican national. Nice guy. Hated Trump. He pointed to his skin and said, “I’m not for him… obviously.”

I responded, “Well, a lot of my Hispanic friends love him.”

He sighed.  “Yeah, that’s true. I try to argue with my friends. They just don’t get it.”

Oh, they get it. Americans get it.

Americans have jobs, the economy is humming, more good is coming. What’s not to get? And in all the getting, one can laugh, too?

The Texas rally was ostensibly about reelecting Ted Cruz. And it was about reelecting “Texas Ted” as Trump called him, but the reason to reelect Ted Cruz wasn’t just Ted. It was about helping President Trump continue his joyous marauding across the political landscape. “We need more Republican votes to get more done. Reelect Ted.”

More tax cuts are coming — 10% for the middle class, the President promised. More promises. President Trump said that it was harder to come to Texas the first time, before he was elected, because he had to tell them what he was going to do. Now, he could tell them what he had done. As he listed the triumphs, he came to Kavanaugh. The crowd roared. Is there any doubt what the crowd would have been like had Kavanaugh not been placed on the Supreme Court? The outrage and disgust would have deflated the Republican hopes. More empty talk from politicians. But Trump is not a politician, I was reminded on Twitter tonight, to which I responded, oh yes he is. He’s just a very, very good politician.

Donald Trump is the freak unnatural phenomenon that pulls energy toward it. A force. He talked indignantly of the hurricane he refused to name coming back to Houston from the gulf once, twice, three times. How dare it do that to Houston! Didn’t Harvey know that only one hurricane was allowed to hit H-town and his name starts with “T” and ends with “P”?

The sheer audacity of this man is astonishing. He believes his own bulls–t, but by God, so do you after listening to him speak with such verve, authenticity, and delight. A wall? Possible. More tax cuts? Possible. Better trade? Possible. Faith and freedom? Possible. Peace with North Korea? Possible. Merkel buying Texas natural gas? Possible. It’s all possible and one wants to vote for him just to see if he can actually pull it off. Give this guy a chance. Vote for Ted Cruz and a straight red ticket. He just might do it.

And if he doesn’t? Well, he’ll have a damn good time trying to make it happen and so will you.

Voting Republican has never been, and may never again be, so much fun.