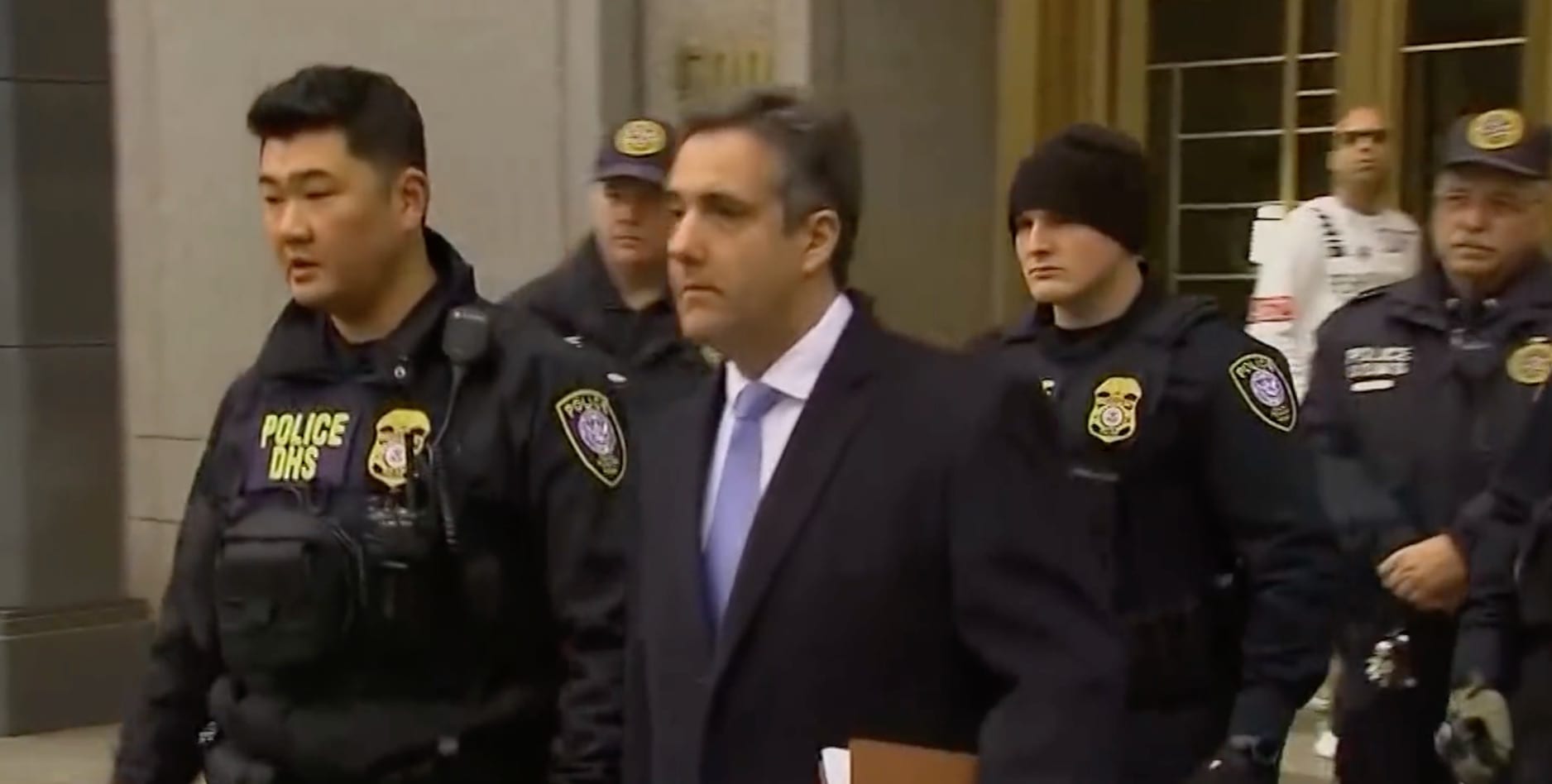 Michael Cohen, Father of Sam(antha), has become the most notorious New Yorker since Son of Sam, and for a few hours on a Hump Day, we got to see all his faces, none of them pretty. He performed more parts in one day than the late Peter Sellers did in The Mouse That Roared (he was everyone from the goofy scientist to the clueless Queen), so we might title his performance The Rat That Whimpered. He was by turns the pathetic Oliver Twist corrupted by Fagin, the eager Joseph Valachi taking an oath of loyalty in the Mob, the puffy Webb Hubbell left to do time for the Clintons, the old Eliot Ness in the bar telling whoever will listen he was once Untouchable, and finally, Robert Duvall in The Apostle, repentantly heading to prison with head held high. His presence on the stand was damning to President Trump only inasmuch as it exposed his soft spot for fawning sycophants, always a dangerous failing in a leader of men.

Perhaps the most revealing moment came when Cohen claimed that Trump never expected to win but thought his candidacy was the world’s greatest infomercial. Cohen maintains sincerely that Trump believed this until the day he won. This bit of rank naïveté is embarrassing to behold in a grown man.

Congressman né Professor Raskin of Maryland hailed this statement by Cohen as his most “trenchant” of the day. No, Professor, that was not a trenchant observation, that was a trench ant observation. That was what an ant in a trench thinks he is observing when he studies the soldier keeping him company for a while beneath the artillery fire.

Anyone who has been involved in a political campaign understands the brutal reality of Sisyphus meeting Damocles. Each day the candidate must marshal all his zeal to push the rock up the mountain toward a seemingly unreachable summit, while the Sword of Damocles is already pre-positioned over his head, with new attacks leveled against him daily. In more modern terms, Groundhog Day meets The Poseidon Adventure; every day you do the same thing over and over, while climbing desperately through the bowels of a ship that may sink at any moment. The only way to avoid being broken on this wheel is to invite Schehezerade along to tell you stories, to take your mind to faraway places populated by the wistful and the fanciful. Those stories can vary but one is irreplaceable: the tale of King Pyrrhus of Egypt and how the Romans won by losing, the nominal winner holds the bag while the loser walks off with the prize.

Ordinary politicians have to invent a narrative of political gain: by running today they gain name recognition for tomorrow, they gain experience, they gain knowledge of the constituency, they see what works for next time, they are meeting donors who may employ them, they are taking one for the Party, they are leaving a pile of unspent money which they can donate to other candidates to buy influence, etcetera. For Trump as a businessman there was only one escape hatch, one cover story, and his murine Sancho Panza reports it to us as gospel: if Trump lost he still pulled off the greatest infomercial.

Yes, the ant in the trench thinks the soldier means it when he says he does not care who wins, as long as his wife recognizes his bravery. But the fellow soldier who shares the trench can see right through his friend’s bravado, he is only fooled by his own.

In truth, even if Trump kept saying this among friends until the day of his election, it had by then long since lost any touch with reality. Well before that Tuesday in November, Trump had crippled his brand by running for President. Half the country hated him now. He was no longer seen as a jovial master-of-ceremonies in the business and entertainment worlds, schmoozing and kibitzing and back-slapping while making billions in the public eye. He had marked himself as a partisan — worse, a Republican partisan — which would hurt him in business and kill him in entertainment.

Had he lost to Hillary Clinton, he would have become a political punch line, shunned by Republicans and banned by Democrats. No politician would ever accept a check from him again. Hillary would box him out of Federal contracts and figure a way to shut down his hotel down the block from the White House. New York State and New York City would turn him down for every building permit. Florida would remain the only state to tolerate him and he could spend the rest of his life playing golf at Mar-a-Lago with O.J. Simpson, between bouts in court with ex-wife Melania trying to break their pre-nup.

Trenchant my fanny, as Bertha Cool (the delightful Erle Stanley Gardner character) would say. If Roger Stone is the Athlete’s Foot of American politics, per Samantha Bee, then Michael Cohen is the Trench Mouth. If he wore a coat in the trench, he has turned it inside out. The Cohen in the synagogue delivers the benediction, but this guy is the Benedict Arnold.