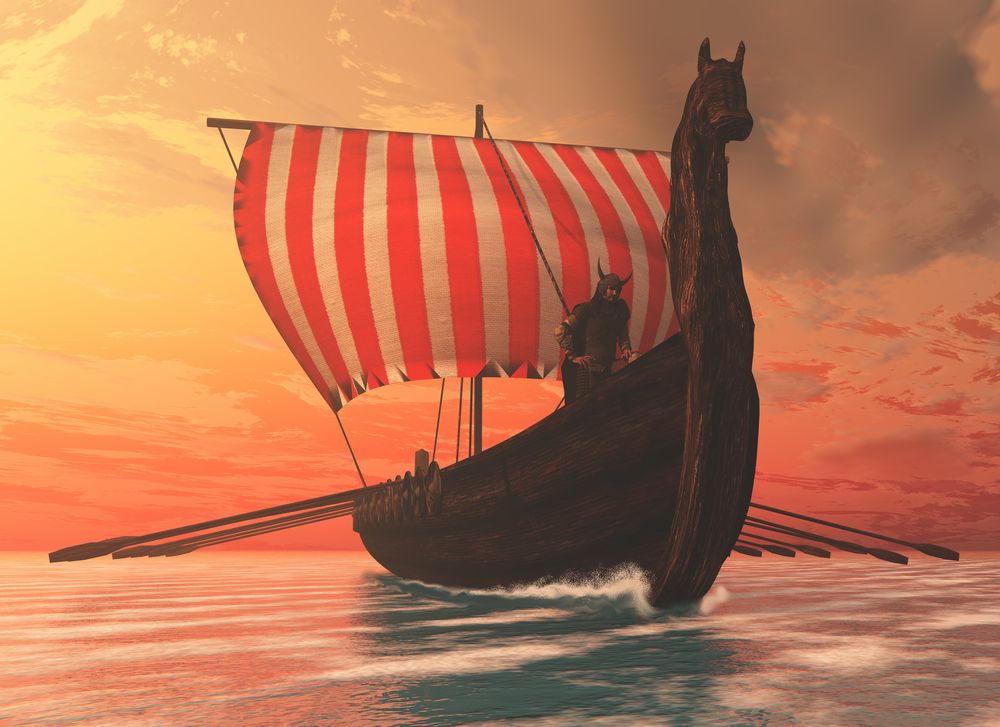 Years ago, I read a novel that impressed me deeply. But I couldn’t recommend it to anyone because it was in Norwegian, the English translation long out of print.

I’m happy to report that you can now get the English version for your Amazon Kindle.

The book is The Last of the Vikings by Johan Bojer (1872–1959). It’s not about Vikings as such. It’s about the cod fishery in the Lofoten Islands sometime around the turn of the 20th century, when steam power was just starting to compete with the traditional sailing fleet. The boats of that fleet, known as “Nordland boats,” appear, to our eyes, to be dead ringers for Viking ships. In fact, they were the descendants of the Viking ships, part of a design tradition 1,000 years old. Hence the book’s title.

The central figure of the story is Kristàver Myran, a poor farmer from the Trondheim region. Every winter he makes “a voyage as long as to America” to the Lofotens to join in the fishing there. He’s a subsistence farmer, dependent like his neighbors on this winter catch for any hope of a better life. It’s a gamble — sometimes you come home rich by your community’s standards. Sometimes you come home deeper in debt. And sometimes you don’t come home at all.

Accompanying him on this trip is his oldest son, Lars, a teenager proud to be a “Lofoten man” at last. But Lars is also interested in books and cherishes dreams of higher education. When there’s a lull in the fishing, and the crew is confined to a cold, miasmic hut ashore, he reads to them out of a novel called A Happy Boy (En Glad Gut), by Bjørnstjerne Bjørnson. A Happy Boy is an “improving” work for young men, about a fellow who dreams of going to college and studying the liberal arts but is persuaded to go to agricultural school instead, with gratifying results. The author (a towering figure in Norwegian literature) believed that peasant boys ought to improve their situations, but not through abandoning their class. Instead, they ought to elevate their class through improved knowledge.

There’s a fascinating section in The Last of the Vikings where the fishermen ask Lars to read to them from A Happy Boy, and they’re all transported by the story: “It had never struck them before that a house and land can be so beautiful despite their being small. They did not know that poor people could have so much sunshine.”

And then another fisherman comes in carrying a radical newspaper called the Dawn. He’s been bringing copies in periodically for Lars to read aloud, and they’ve all enjoyed reviling the greedy capitalists. But now the fishermen’s attitude has changed. They tell the agitator, to his shock, to get out and take his paper with him:

The men looked at one another a little doubtfully until Henry Rabben said, “Well, it’s strange, but the book makes us perhaps better than we are, and that paper makes us worse than we are; but in other ways, too, we often become like those we keep company with.”

Another surprising element, in a realistic novel out of Europe in the early 20th century, is the treatment of religious characters. There’s little suggestion here that pastors and missionaries (who abound in the fishing camp) are hucksters or hypocrites. The priest at the mission feels somewhat superfluous in the face of the fishermen’s exultant hymn-singing in church on Sunday, but he’s sincere. And when old Jacob, the limping, bibulous avatar of all fishermen, comes in to make a large contribution to the mission out of his fishing earnings, the priest smilingly deposits it in a bank account in Jacob’s name.

Bojer was nominated five times for the Nobel Prize in Literature but had been almost forgotten by the time of his death. The illegitimate son of a businessman, he was raised by a poor foster family in the area where Kristàver Myran lives in the novel. He never settled on an ideology and so never landed squarely in anybody’s literary camp. His output, by all accounts (I’ve only read this book), is uneven. The Last of the Vikings is often considered his masterpiece. A single tour de force can justify a career, though, and The Last of the Vikings ought to have made Bojer immortal.

READ MORE from Lars Walker: A Disappearance in Norway, On the Screen

The book is full of conflict between men — men of different regions, men of different social classes, men who chance to cut each other’s net in the swarming fishing grounds when the cod are running. The true conflict, however, is a greater one. It’s the struggle of the poor man against nature and the order of the world. The poor man dreams of a better future, wagering the only thing he possesses — his own life. He buys a boat on credit, only to discover it’s cursed, unlucky, a vessel with a history of capsizing. But he sails out anyway, even bringing his son and his neighbors as crew, well aware that if they’re lost, all their families will suffer and may starve. He can’t afford to take the risk, and he can’t afford not to. He must be a fatalist.

I’ve read very few books in my life that affected me as this one did. And I’m convinced that’s not just because some of my ancestors were part of all this. Here is tragedy without despair, realism without cynicism. The translation, I must confess, is not all it could be. It tends toward awkward literalism. But the soaring descriptions of the majestic Lofotens and the epic battles with the sea come through vividly. The Last of the Vikings will take you on a voyage you’ll never forget.