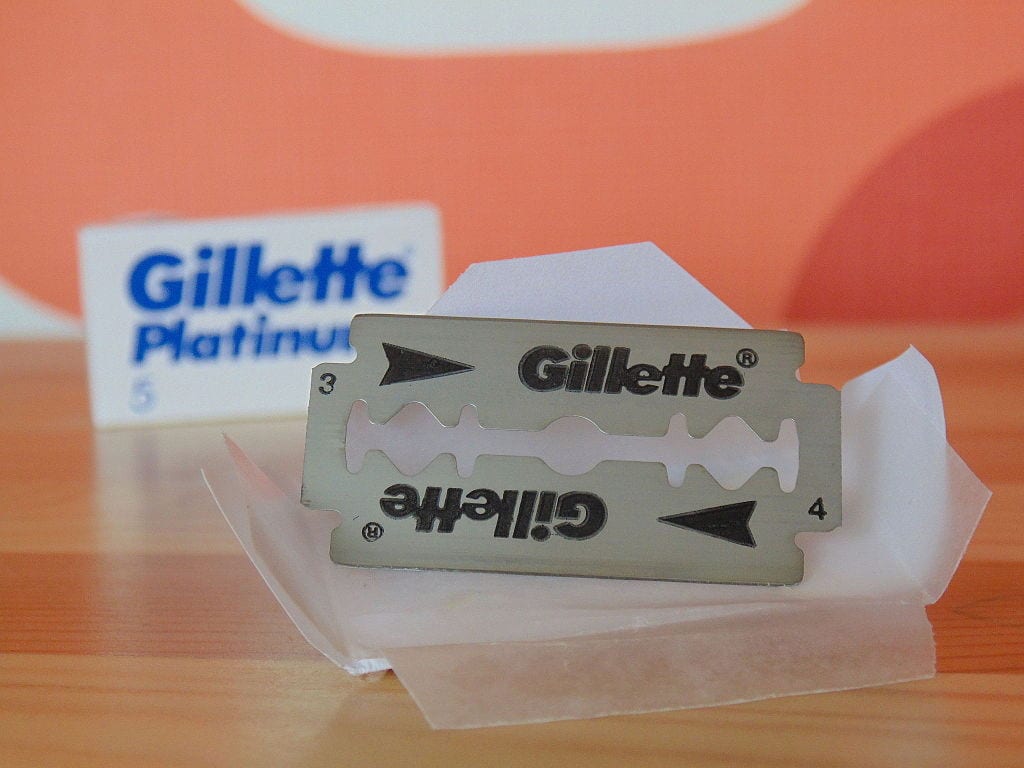 There’s a lot we have to put up with in life and a lot that we don’t. One of the things we don’t have to put up with are the hyper-liberal political lectures that actors, singers, and NFL players try to inflict on us. It’s easy to change the channel — or read a book — rather than watch these idiots perform.

They have been joined by the people who inject the same sort of liberal politics into television ads for companies that want to preach “progressive” messages instead of telling us why their product is better than the other guy’s.

Gillette made most of the products with which our fathers taught us how to shave. I remember my first razor, a crude Gillette that held their trademarked “Blue Blades” in a loose assemblage of parts. It made nicks and cuts an almost-daily part of shaving. Special care had to be taken when shaving before a date.

Until this month, Gillette was entirely satisfied with its old slogan, “the best a man can get,” which was always a double entendre. The Gillette ads used the slogan in TV commercials and print ads in which a clean-shaved man was having his face stroked by a dynamite blonde or a sexy brunette. The message was perfectly clear: use the razor, get the babe.

But the geniuses who run Gillette decided to change the slogan to one that’s more politically correct. It’s now advertised as “the best a man can be,” in a commercial that’s a steaming pile of anti-male liberal messages about bullying, the “#MeToo” movement, sexual harassment, and men’s collective duty to ensure that the next generation of boys become more like women.

Gillette doesn’t want men to stop shaving. They want us to shave our legs as well as our faces.

We don’t have to put up with this so I’m saying to hell with Gillette.

It’s really no surprise that Gillette would be changing its slogan to conform to political correctness because it’s now part of Procter & Gamble, which is hell-bent on appealing to millennials, GenX, and Gen Y and whoever else is old enough to buy soap, deodorant, or razors. They are the population segment that is being fed the same liberal nonsense in high school and college.

As I reported in my year-end column, Procter & Gamble applied to the U.S. Patent Office for trademarks on the acronyms “LOL,” “NBD,” “WTF,” and “FML” often used by millennials in text messages. We know that LOL means “laugh out loud,” and those of us who served in the military can figure out acronyms for “no big deal” and already know the ever-popular “what the f***?” I had to look up “FML” which means “f***my life.” (Advertisements to market “WTF” shower soap and “FML” toothbrushes may prove difficult to write.)

Boyhood — a time of learning, rebellion, discovery, and pushing boundaries — is when boys are supposed to be taught how to be a man. But neither boyhood nor manhood is politically correct. Manhood isn’t yet a crime, but it’s already being characterized by the American Psychological Association as something that requires mental health treatment.

It’s not new that the psychiatric “experts” are mixing its pseudo-science with politics. In 2003 the “experts” at U.C. Berserkely said that conservatism is a mental disorder. A TAS column I wrote at the time included a quote from a pshrink I knew. He told me that “conservatism isn’t a diagnosis.” Neither is manhood.

Last month the APA issued “guidelines” for psychological treatment of men and boys for the mental disorder of “traditional” manhood. They say their research “proved” that masculine traits such as stoicism, competitiveness, and aggression can be problems. (They don’t say for whom.)

They’d have me believe that my father was wrong when he taught me how to be a man. They wouldn’t forgive him for his mistakes even though — as a Marine veteran of Guadalcanal, Tarawa, and Iwo Jima — his perspective was rather different from theirs.

I’m sure these clowns would have said Dad was an example of toxic masculinity. Yeah: the kind that have been keeping American snowflakes safe since 1775.

To Dad, being a man meant being stoic: girls cry, boys don’t. When you bloodied your knee while roughhousing, you came in the house, washed off the wound, put a band aid on it, and went back to what you were doing.

A man — or a boy — never abused women in any way. Anyone who did was morally bankrupt and a coward.

Women and girls, because they are usually physically weaker, are to be protected. Protecting your mother, sister, girlfriend or wife from someone else’s abuse is an unquestionable duty. That means that one of the many duties of boys and men is learning how to fight and win.

Competitiveness meant getting better grades than anyone else in school, and working harder if you didn’t. When you get a job, it means doing it better than anyone has before. And it means you don’t brag because your work speaks for itself.

Aggressiveness is admirable but has to be applied in a civilized manner. As Churchill once said, when you have to kill a man it costs nothing to be polite.

Dad taught me that manhood was a matter of personal responsibility. You — boy and man — are responsible for what you do and don’t do. You don’t start fights, but you damned well finish them.

Being a man meant living up to your responsibilities by working hard to support your family and make sure they have everything they need to thrive, which doesn’t always work out to everything they want.

You work hard and achieve the highest goal you can set for yourself. And you don’t whine about “doing the best you can” because in these matters you have to succeed.

Much of it boiled down to Dad’s favorite saying: anything worth doing is worth overdoing. Or, as Hannibal Smith said in the “A-Team” movie, “overkill is underrated.”

But now, according to Gillette, we need to abandon those definitions of manhood. We’re supposed to shudder, shrink from our duties, and let others do the heavy lifting. (And just who’s going to do that?) Men are supposed to share the guilt of sleazy punks such as Harvey Weinstein who apparently demanded that women have sex with him in order to get parts in his movies.

We’re supposed to subordinate ourselves to the “#MeToo” movement, to squash our aggressiveness and competitiveness and cry when they think we should.

Those who want men to feel guilty about manhood are spouting a part of the liberal dogma that’s always been part of American politics. The people who preach this nonsense believe there’s no such thing as American Exceptionalism, that America is fundamentally flawed, that it doesn’t deserve its wealth and power.

They’re the people who cheered Jimmy Carter’s speech when he pronounced that America was suffering a deep malaise because they believe Americans should be depressed about what they are. They’re the people who cheered Obama when he was dishing with the girls on The View while the shirtless Vladimir Putin was splitting wood because they believed Obama was setting a better example for men.

These are the people who want us to believe America is weak and should act accordingly by subordinating itself to the UN. To hell with them, too.

America was founded by men who pledged their lives, their fortunes, and their sacred honor to the cause of freedom. Many of them lost everything in the Revolutionary War.

Since about 1943 America’s economy has been the principal engine of freedom in the world. Our economy didn’t achieve that role because we weren’t competitive or aggressive. Gillette didn’t get to be worth the $57 billion Procter & Gamble paid for it by not being as aggressively competitive as it could.

America didn’t win two World Wars by not being stoic, competitive, and aggressive. Adm. Chester Nimitz didn’t say the battle of Iwo Jima was won by timidity: he said “uncommon valor was a common virtue” among the men who fought there. We lost in Vietnam because our leaders were men such as Lyndon Johnson and Robert McNamara, who didn’t have the guts and brains of a Nimitz. We are losing in Afghanistan, Iraq, and Syria for the same reason.

Men who live up to their responsibilities — at home, in their jobs, in the military, and in government — have no reason to feel guilty about their manhood. By meeting our responsibilities, we perform the duties life requires of us. Most of us do it gladly. And that’s as good a definition of manhood as you can find.

I’m neither stingy nor wasteful. That means I won’t throw away the unused blades I have for my Mach 3 razor. I’ll use them up and then switch to another brand.