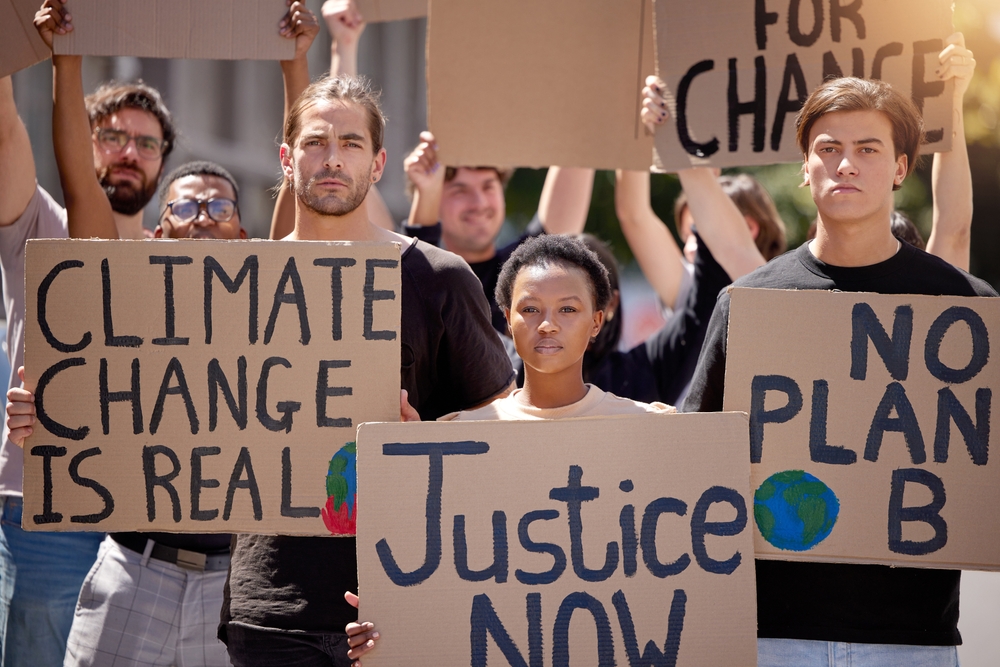 Congratulations, Wokesters! The numbers are in, and it’s official — you have soared to the top spot on the Fermaglich Annoyance Scale, bypassing Richard Harris’s rendition of “MacArthur Park,” people who pretend to hold the elevator door for you while simultaneously pounding the “Close Door” button, and the poem “Trees.”

Perhaps the tips below will help you get along better with the rest of us, or, at the very least, keep me from smacking you in the head with a Chilean sea bass.

“Grab Them by the Patriarchy!” “People Before Profits!” “Resist!”? Believe me, I’ve tried to resist, but you’re as pervasive and even more annoying than man-caves and the men who inhabit them. “Yes, We Can!” Yes, you can what? Boycott? Whine? Boycott and whine at the same time? Boycott, whine, and remind your parents to put more money on your Starbucks card? And maybe you should get a real job before buying the hoodie that says, “Workers of the World, Unite!”

If you subsist solely on plant-based foods, it doesn’t bother me, but don’t look at me like I’m a member of the Donner Party because I ordered a T-bone steak, and I won’t look at you like you’re Moby. Personally, I think you do more of an aesthetic disservice to society in those pleather pants and vegan shoes.

I’m not interested in the political theories of a 25-year-old barista who thinks his Chinese character tattoo says “Tranquility” when it actually says “Hot & Sour Soup.” Do not speak a word to me except to ask, “What can I get you?,” bring my skim latte before dusk, and thank me when I shove a dollar bill in your tip jar. Here’s something to ponder: If your specious rhetoric falls out of your mouth or onto your graphic tee, why can’t it fall in the forest so I don’t have to hear it?

Don’t tell me what to call you

I’ll make up my mind once I get to know you, and the prospects look poor. Nothing can be both optional and mandatory at the same time. Don’t tell me what your preferred pronouns are and then force them on me. That’s not a choice. It’s like a waiter asking me if I want the fish or the veal and then telling me I’m having the pork chop. At least there I have the option of leaving.

As the person who’s always silently correcting your bad grammar in my head, you can shake your head and roll your eyes all you want — I refuse to refer to any individual as “they.” Don’t misunderstand — you do you, Boo. Just don’t expect everyone else to come along.

Your three pronouns are even more incentive for me to hit the little garbage can icon. How about I sign my emails with my three preferred ice cream flavors? Like this:

At least that’s useful information just in case we go to Friendly’s someday (your treat). It’s not always about you. Or consider using words that would actually tell me something about you, like, “I Heart Coachella!/Pescatarian Except for Roast Pork/Haven’t Read a Book Since Goosebumps: It Came From Under the Sink!”

Stop messing with my language

Come at me, because I will gargle glass shards before I ever refer to a mother as a “birthing person.” “Birthing people”? Really? Really, really? Let’s change the second Sunday in May to “Birthing Person’s Day”! Happy Birthing Person’s Day! I got you a gender-neutral Carvel Cake! And the frosting is not promoting white privilege — it’s just buttercream.

Would you rather be told that a differently logical, follically challenged, anti-sobriety activist person with a drug dependency who was involuntarily leisured in a custody suite for a minimum of 10 years with time off for good behavior temporarily appropriated some of your most valuable possessions or that “some thug just boosted your Samsung 4K UHD TV with the 100-inch screen, the Nikon SLR camera you forgot to insure, and that Degas sculpture? J/K about the sculpture”? Well, you’d probably rather not hear that bad news at all, but if it does happen you’d likely want to understand it.

Manhattan > Personhattan? No more Manitoba? Ixnay on Mandarin, both the fruit and the language? I’d like to be there when you tell Despot-in-Residence Daniel Ortega that, going forward, the capital of Nicaragua is no longer Managua but Personagua. And don’t confuse the country’s scariest prison, El Chipote, with Chipotle. No guac and chips for you. Next!

Defund your police — I’m keeping mine

I live in New York City, where crime is as rampant as “My Name is ________” badges at an insurance convention. I like my life without getting shoved onto subway tracks. I’m not fond of the film Gunfight at the O.K. Corral, and I certainly wouldn’t like the sequel Gunfight at the CVS any better.

If I’m being pummeled on the head with a ball-peen hammer and about to be kicked into the gutter just as six M104 buses pull up, I’ll take the police officer and you can take the social worker, who, as you lie there bleeding out, will assess your needs, situation, and strengths and offer support networks. Cremation or traditional burial?

I know there are convicted felons in prison who don’t have access to mani-pedis, high tea with lightly feathery scones, and an Uber account. Shucks.

Mollie Fermaglich is a humor writer and political satirist whose articles have appeared in the New York Times, the London Times, Glamour, Publisher’s Weekly, King Features Syndicate, the New York Daily News, Cosmopolitan, the Satirist, the New York Post, California magazine, and many other newspapers and magazines.