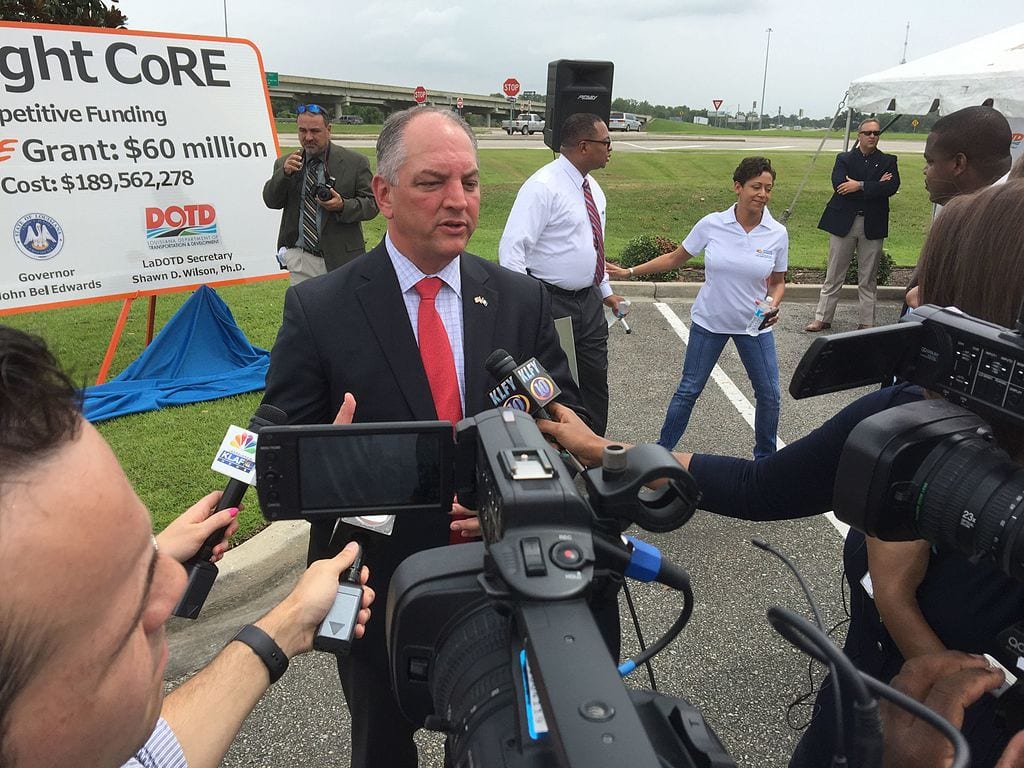 The announcement this week that letters from Louisiana’s Department of Health would go out to elderly Medicaid patients in nursing homes across the state — some 20,000 people — warning them of possible eviction due to the budget crisis at the Capitol in Baton Rouge has now made national news. It’s the latest in a long-running game of chicken between John Bel Edwards, the only Democrat governor of a Deep South state, and a Republican-controlled House of Representatives which is burnishing a recent tradition of fiscal conservatism largely foreign to an edifice built by Huey Long.

And Edwards’ antics are raising the profile of a fight which can only sabotage his political future — especially given the preponderance of the state news headlines attributable to his two-plus years governing America’s most anemic state in economic terms.

Louisiana ranked as the nation’s worst economic performer in 2017, actually shrinking its gross domestic product by 0.2 percent. Only two other states, Kansas and Connecticut, didn’t grow amid a resurgent national economy; both were just on the wrong side of stagnant. But Louisiana’s negative-0.2 percent was, depressingly enough, an improvement over the negative 0.4 percent the state posted in 2016.

What accounts for such miserable economic performance? Well, when Edwards took office in January of 2016 he made much of a “fiscal cliff” faced by the state as its inheritance from his predecessor, Republican Bobby Jindal. But amid demands for some $2 billion in tax increases, which were accomplished by making Louisiana’s state and local sales tax burden the highest in America, Edwards also took on the Obamacare Medicaid expansion by executive fiat — and in doing so growing Louisiana’s budget by some $3 billion with the stroke of his pen.

The governor and his lickspittles among the left-wing advocacy class and the legacy media have since claimed the expansion, which has put a half-million able-bodied individuals onto the government dole, has saved Louisiana money. This despite testimony in a House committee in late April that it costs an average of $500 per month to provide Medicaid coverage for each enrollee. The basis for the claim is that when someone comes through a hospital door, the federal government only pays 60 percent of the cost for an indigent patient, but 90 percent of the cost for a Medicaid enrollee.

While this is true, there are a significant number — hundreds of thousands, in fact — of new Medicaid customers who formerly had private health insurance. They weren’t indigent. And as it turns out a whole lot of them aren’t even eligible for Medicaid — in that same testimony it was revealed there are at least 83,000 Louisiana enrollees who claimed incomes on their Medicaid applications more than $20,000 less than in their tax filings. As some 61 percent of those Medicaid enrollees didn’t even file taxes, that 83,000 number is clearly a conservative estimate. And for those of you who like to do math, $500 per month is $6,000 per year, and multiplied by 83,000 people bilking the state for free insurance coverage that’s some $498 million per year in flat-out waste.

Which would balance the state’s budget without any new taxes. Though it would claw back some of the socialized-medicine-through-the-back-door effort at Medicaid expansion the governor’s team has been working on. Naturally the governor wasn’t a fan of a bill that would do something about that $498 million flying out of the state treasury’s door.

In other words, adding a half-million able-bodied, healthy people to the Medicaid rolls, even when they’re manifestly ineligible for that government swag, isn’t a boon to the state’s economy. It’s an unmitigated disaster. And that’s why despite his tax increases Louisiana’s fiscal situation is still a shambles.

This year, the bulk of those sales tax increases are set to expire in July. That opened up a “fiscal cliff” of indeterminate size; Edwards has made claims of $1.5 billion, $1.1 billion, $994 million and $648 million in recent months, while the House Republicans, who passed a budget last month which is balanced without the need for raising taxes, pegged the number at more like $495 million. It’s probably less than that and can be shrunk even lower were Edwards to take some prudent steps to pare back the $28 billion document.

The reaction among the governor and his allies to the House’s budget was one of apoplexy. He’s particularly exercised at the “paltry” $11.9 billion the House allocated for the Louisiana Department of Health, demanding more like $13.5 billion and declaring that with the House’s figure the state’s two public medical schools, run by LSU in New Orleans and Shreveport, will have to close along with several of the state’s “charity” hospitals in cities like Lafayette, Monroe and Alexandria, among others.

This despite the fact the Louisiana Department of Health’s budget was just $9 billion two years ago and nothing closed.

Which includes the nursing homes Edwards is now threatening to yank patients out of while blaming the Republicans for their cruelty.

An objective observer of these histrionics might wonder at the potential blowback to such high amplitude coming from the governor, particularly when media coverage of his antics — which has been predictably slavish, as has been the case since he took office — has included words like “unprecedented” and “crisis.”

After all, as terrible as Edwards and his pals have declared Jindal’s tenure to have been, Momma wasn’t kicked into the street from her nursing home in the previous administration. The medical schools didn’t close, and all but one of the state-run hospitals kept running (the one in Baton Rouge was rolled into a contract with a private hospital). At some point people might conclude that if none of these problems were so critical when Jindal was running the state and they are this critical now even after having coughed up billions of dollars in new taxes — such a price, in fact, as to destroy the state’s private sector economy — maybe it means John Bel Edwards can’t run so much as a lemonade stand and is nothing more than a nincompoop babbling as Louisiana burns.

After all, some 27,000 Louisianans departed for other states last year, renewing a long-standing outmigration problem which, whatever one might think about Jindal, had abated during his time in office. That’s a problem which might well be accelerating; last month the state groaned as Smoothie King, a New Orleans-area based health drink franchise whose corporate name graces the basketball arena in which the New Orleans Pelicans play, announced they’d be moving their corporate headquarters to Dallas.

No one was particularly surprised at the loss, nor should anyone have been. Treat the business community as prey, as Edwards and his cabal of trial attorney donors have done with the oil and gas industry, for example, in attempting to sue them for the state’s coastal loss, and they will respond as prey — namely, by fleeing for their lives. The Berlin Wall wasn’t built to keep out hordes of people wishing to sample the delights of big government in the German Democratic Republic, after all.

One theory for why Edwards is so loudly threatening to empty the nursing homes is that slavish media coverage. He’s gotten away so far with such clownish dishonesty — claiming in 2016 that if he didn’t get the tax increases he demanded that college football in the state would be a goner, for example — and such provably poor management (the administration of the recovery program from the state’s 2016 floods, which was so alarmingly deficient that it earned Edwards a dramatic dressing-down in a congressional hearing on the subject by Reps. Mark Meadows and Jason Chaffetz, being an easy example) that his team believes there is no point at which the state’s media will turn on him.

And he might be right, because while Louisiana’s Republican base voters are beginning to hate Edwards with a burning passion rivalling a different Edwards — that being the rapacious crook Edwin Edwards, who served four terms as governor from 1972-80, 1984-88 and 1992-96 — his approval rating statewide is still positive.

That said, the bloom was coming off Edwards’ rose even before this week’s debacle. Edwards was sitting at 50 percent approval in an April Morning Consult poll, with 31 percent disapproval. That might look like a good number, but in January the same pollster gave Edwards a 56-27 rating; his demands for tax hikes clearly aren’t resonating.

And now, at least based on anecdotal evidence appearing on social media, talk radio and comments under news reports by legacy media online, the latest hyper-aggressive use of the Washington Monument strategy to which he’s so wedded simply doesn’t appear to fly. If the state’s Republicans hold strong and insist on some degree of fiscal responsibility, he might well meet his political Waterloo in this year’s legislative session, and become a lame duck waiting to be cooked in next year’s gubernatorial election.

And after two-plus years of outmigration, tax increases, administrative incompetence, and amateur-hour scaremongering, that would be a welcome relief for an increasingly beleaguered and declining Bayou State.