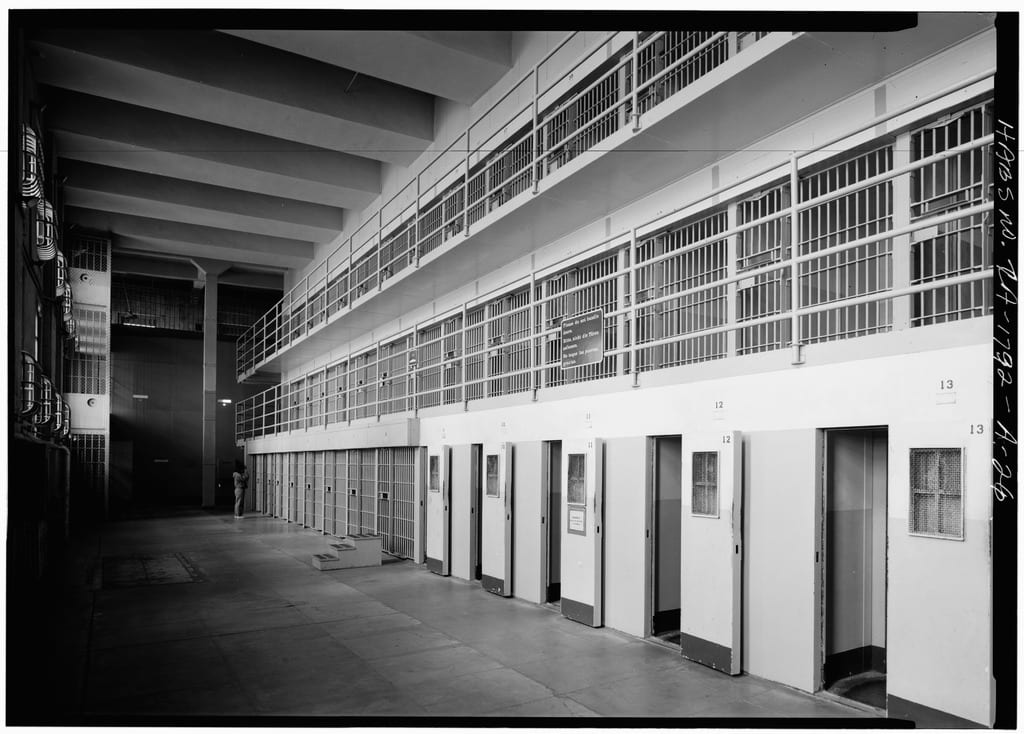 Now that another contentious election season has ended, it is time to shift back to legislative mode and revisit important issues that have waited their turn. Congress has been polarized in recent years, but one reform effort in particular will hopefully break that mold.

Criminal justice reform — thanks, in part, to an overwhelming 360-59 vote in the House on the FIRST STEP Act — has quickly gained momentum, championed by conservatives as a down payment towards ensuring that prisoners re-entering society do so with the tools they need to succeed. President Trump, who campaigned on restoring law and order, has been a vocal supporter of prison reform since earlier this year, and has recently signaled support for various sentencing proposals, as well.

But not everyone agrees. Senator Tom Cotton, a long-time skeptic of criminal justice reform, penned an article in the Wall Street Journal this summer in which he generally praised rehabilitation efforts in federal prisons but took sentencing reform to task, calling it a “foolish approach” that would “endanger communities.” Meanwhile, now-former Attorney General Jeff Sessions has been critical of reform efforts as well, claiming that changes in drug sentencing risks allowing violent crime to run amok. Research and, most importantly, experience — particularly in southern red states — inform us that both arguments lie on shaky, outdated foundations. As the Senate appended modest sentencing proposals to the FIRST STEP Act, it is worthwhile to separate facts from fiction.

Among the subtler tactics that critics of federal sentencing reform employ is a simple progression: begin with discussion of America’s real, ongoing problem with drugs; immediately shift the focus to violent crime, as if the two issues are self-evidently identical; and then argue that the reason for America’s historical reduction in violent crime can be traced to the adoption of lengthy mandatory sentences for drug dealing.

This may make for a neatly packaged argument, but reality spins a far more complicated tale. First, plain observation of drug overdoses and violent-crime trends simply doesn’t lend itself to correlation. Between 1999 and 2016, drug overdose death rates increased by over 200 percent, while violent crime rates fell by over 26 percent. These skyrocketing overdose deaths occurred despite an entire bevy of mandatory sentencing tools available to federal authorities that were ostensibly enacted to curb the worst consequences of drug crimes. Instead, such sentences have had no discernible effect on deaths caused by drugs.

At the ground level, there are reasons why our current opioid scourge hasn’t translated to the sort of crime waves that attended previous drug crises. As both Sally Satel and Sam Quinones have explained at length, when heroin began weaving its way into new markets that were primed by growing prescription drug abuse more than a decade ago, Mexican dealers explicitly avoided inner-city areas that were plagued by the sort of violence that surrounded the crack-cocaine trade in the 1970s and 80s. Coupled with a new “drive-thru” business model that largely eschewed the need to defend specific geographic areas, the spread and delivery of illegal opioids has been, by design, less violent than in years past.

No illegal trade is immune from violence, and it is a mistake to discount that which does occur. Nonetheless, when those who oppose efforts to recalibrate federal drug sentencing laws reflexively point to increased violent crime as a reason not to, multiple layers of important context are generally left unaccounted for. Any simplistic explanation that directly ties America’s opioid problem to violent crime possesses a confidence that it has not earned.

Which leads to the question of whether lengthy mandatory sentences are an effective mode of crime prevention.

A common rejoinder to reform efforts from those who support mandatory sentencing is that “proposals to give judges more discretion and cut mandatory minimums endanger public safety,” or otherwise that being “soft on sentencing” leads to more violent crime. But is this true?

And it should be noted at this point that I am a person who supported the “three strikes and you’re out” changes of the 1990s.

Let me explain. While a simple fact is that research has yet to pinpoint the factor(s) most responsible for our historic reduction in crime, the weight of evidence is clearly against those theories which emphasize imprisonment — particularly imprisonment meant to discourage drug use.

According to a comprehensive analysis of the dramatic rise of incarceration rates and its affects by the National Research Council, there is an outward “plausibility to the belief that putting many more convicted felons behind bars would reduce crime.” However, the authors explain that even a cursory examination of the data reveals the “complexity” of drawing meaningful correlations between crime and incarceration rates:

While incapacitation effects may be effective when targeted towards “very-high rate or extremely dangerous offenders,” the authors conclude that the “incremental deterrent effect of increases in lengthy prison sentences is modest at best.”

Others have drawn the same conclusion, and when considering the nature of drug offenses in particular, these findings are not surprising. Typical drug abusers organize their lives over short timeframes, making them less likely to consider the long-term repercussions of their actions, including the potential for imprisonment. Once they are locked up, incarceration usually fails to motivate them to meaningfully change their behavior. (Given that simple incapacitation doesn’t make many demands of them, why should they change?) Nor does prison address their underlying psychosocial environment that often functions as an incubator for addiction in the first place. Is it any wonder then why this population in particular recidivates so frequently upon release?

Criminal justice reform is engineered to incentivize participation in substance-abuse treatment and other recidivism-reduction programs, or otherwise to curb overly-punitive sentences which may extract their pound of flesh but also rapidly lose their effectiveness as one moves down the offense severity ladder.

To summarize, weightier factors besides simply “locking up” criminals must be at play to account for crime reduction. Ascribing that reduction solely to lengthy sentences is a theory that doesn’t play well with the data — especially given the fact that thirty states have recently experienced crime rate reductions while simultaneously reducing their prison populations.

Myth #3: No one goes to federal prison for “low-level, non-violent” drug offenses.

It is easy to produce a statistic that there are relatively few people incarcerated for federal drug possession offenses and then brush one’s hands together with satisfaction, believing that the “we overincarcerate” canard has just been dispelled. But while this immediate fact is indeed true, putting it into context makes this line of argument less salient.

First, consider the composition of all federal drug offenders. In 2017, about 48 percent of drug offenders sentenced at the federal level — a majority of whom are trafficking offenders — were in the lowest criminal-history category, having been previously sentenced for, at most, one low-level offense. Roughly 60 percent were in the lowest two categories. To be sure, drug trafficking, which includes street-level dealing, involve more serious offenses. Even so, there are still tens of thousands of federal inmates being incarcerated — for historically longer periods of time — for lower-level drug offenses. Recidivism is a real problem, but federal prison is a big stick, and shouldn’t be the front-line corrective for every offense. Too often it is, even for simple possessors (over 80 percent of whom receive a term of imprisonment).

Second, drilling down on individual cases makes various absurdities that attend some mandatory sentences for first-time offenders even more acute.

In 2004, Weldon Angelos was convicted on three separate charges of marijuana distribution, which alone would have resulted in six to eight years in federal prison. However, because he was also in possession of a firearm — which he never used nor brandished — he was also charged and convicted under Section 924(c) of the Gun Control Act to three additional firearms offenses.

As a result of the mandatory sentences under Section 924(c)’s “stacking” provision, he was sentenced to an additional 55 years in prison on top of his punishment for drug dealing. The sentencing judge in his case had no choice but to follow the law. Nonetheless, he appealed to Congress to address what he called an “unjust, cruel, and even irrational” punishment, and pointed out in his decision that Angelos would have been treated more leniently should he have been convicted of hijacking an aircraft, rape, or even second-degree murder.

I consider myself particularly tough on gun offenses, but is what Angelos did really worse than hijacking an airplane? Rape? Second-degree murder? This is evidence of a system that needs correction.

Angelos’ case is a practical reality of just one mandatory sentencing statute among many. Drug deals involving guns often end badly and should be reflected in sentencing, but when cases such as his are punished more severely than similar cases in which a gun is actually used or death occurs, it becomes clear that the law has lost a crucial sense of proportion. Targeted changes to Section 924(c) proposed in the Senate version of FIRST STEP would help to correct this imbalance, applying enhanced sanctions only upon true recidivist offenders — changes in which even former Attorney General Sessions has expressed support.

Beyond this change, other sentencing fixes in FIRST STEP would address other overly-punitive mandatory enhancements for certain drug crimes, and expand the current judicial “safety valve” to a greater palate of federal offenders when circumstances warrant lesser punishments than present law commands. These changes are prudent in recognition of a hard lesson: many inmates in federal prison are being detained longer than necessary to achieve noticeable returns for public safety. Evidence shows that the incapacitation effect of lengthy sentences works on extremely dangerous inmates or “frequent fliers,” but they rapidly hit a point of diminishing returns. Put another way, our current practices may be making many federal offenders more dangerous the longer we hold them. This should be unacceptable to data-driven law-and-order conservatives.

Sentencing reforms in the FIRST STEP Act acknowledge these realities. No mandatory sentence would be eliminated, but they would be configured to work better. Meanwhile, other areas of the bill would expand incentives for those amenable to change to accept treatment for addiction or mental health problems, or otherwise receive beneficial workforce or vocational training to better re-integrate with their community upon release.

We must begin shifting the paradigm away from using mandatory sentences as the obvious tool against lawbreaking — as states such as Florida, South Carolina, and Texas have done. Crimes should be punished, but the law loses its legitimacy when it punishes disproportionately. The FIRST STEP Act — along with modest sentencing reforms — will help regain the law’s moral force and make us safer at the same time.

Ken Cuccinelli is a former Attorney General of Virginia. He is President of the Senate Conservatives Fund and a signatory to the Right on Crime Statement of Principles.