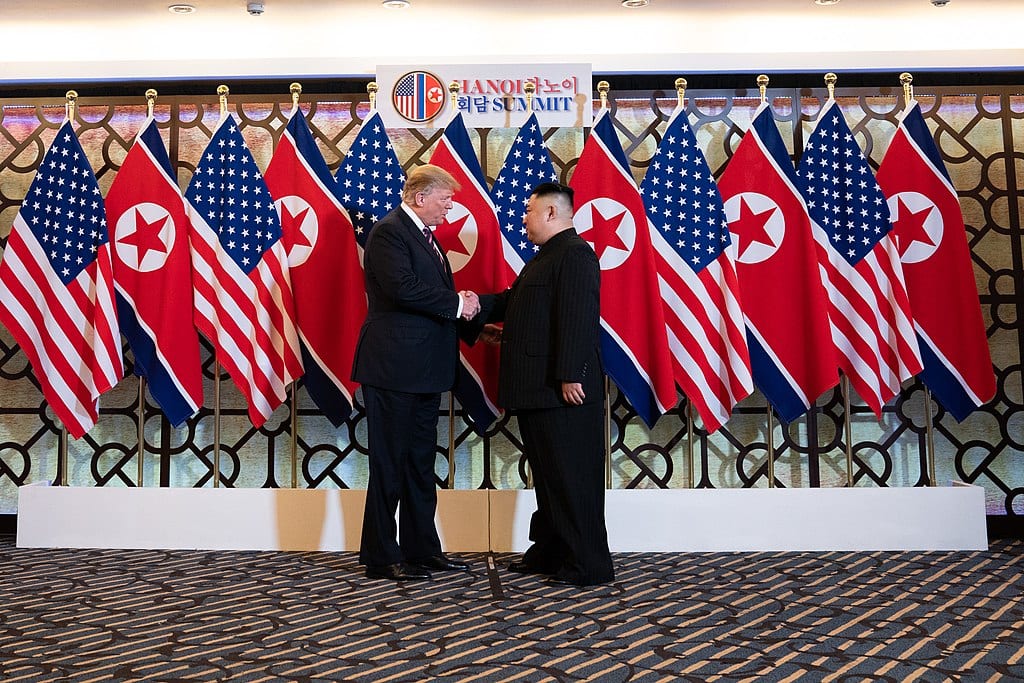 President Trump’s approach to diplomacy is, to say the least, unusual. When asked why he appears sympathetic to dictators and despots such as Vladimir Putin, Xi Jinping, or Saudi Crown Prince Mohammed bin Salman, he’s shrugged off these important questions by saying he wants to create a relationship with them.

That approach has been maddening to defense-minded conservatives. Trump, after his Helsinki summit with Putin, said that he gave the same weight to Putin’s denial of interference in the 2016 election as our intelligence community’s determination that Russia did precisely what Putin denies. That made him look foolish (and weak) and it increased the distrust between him and the intelligence community.

That situation wasn’t improved when Trump refused to cast blame on bin Salman for the murder of journalist Adnan Khashoggi.

After his Singapore summit with Kim last year, Trump said that the North Korean nuclear threat had ended, He later proclaimed that he and Kim had fallen in love with each other.

It’s every president’s prerogative — actually, the president’s duty — to challenge the intelligence community, to criticize it and force it to support its conclusions. But to do so publicly benefits our adversaries by increasing the adversaries’ credibility and diminishing Trump’s ability to deal with them. He has done so on too many occasions.

In his two-hour CPAC speech Trump, however inadvertently, told us the reason why he praises the dictators and despots.

Commenting on his walkout at the Hanoi summit, Trump expressed enormous sympathy for Otto Warmbier, the American student lured into North Korea, tortured. and finally released shortly before he died. But hey, he said, “I need to negotiate.”

That statement was highly revealing. Trump, in order to create relationships and negotiate with despots, is willing to believe their lies, or at least say he does.

Trump’s purely transactional approach to diplomacy may sometimes work. In the case of the Hanoi summit last week, it sort of did and sort of didn’t. Before and after the summit, Trump made three important concessions and received nothing in return.

Before the Hanoi summit, Trump reportedly conceded one our principal demands, that Kim should disclose all of his nuclear weapons, where they are located and where all his ICBMs are. That gave credence to the media’s bleat that he was going to give too much to Kim and get too little in return.

On Friday, after the summit, the Pentagon announced that we were ending the big annual military exercises we’ve conducted with the South Koreans for decades because Trump has determined that they were too expensive. That end is precisely what Kim — and his father and grandfather — have demanded for decades. It’s a very bad decision because it inevitably lessens the capability of our forces, and South Korea’s, to work together to defend that nation. It increases substantially the efforts of South Korean President Moon Jae-in to reach his own accommodation with the Norks.

It is inconceivable that Kim didn’t know how Warmbier was treated. Why would Trump believe him?

Perhaps he doesn’t, because he’s negotiating and is willing to say anything to achieve what he believes is success. Perhaps because he is far too susceptible of flattery he assumes — incorrectly and in terms that prevent diplomatic pressure from being most heavily applied when it is deserved — that people such as Kim, Putin, and bin Salman are just as susceptible.

(There was a fourth concession, which was not as important but nevertheless damaging. Trump should never have agreed for the second summit to be held in Hanoi because it wasn’t neutral ground. His agreement to holding the summit in Hanoi — the capital of the nation that had defeated us in a very long war — seemed as if it were obeisance to both North Korea and Vietnam.)

Trump said that the Norks were unwilling to do enough to make it worth our while to remove all the sanctions we have on that nation. Kim’s regime disagreed publicly and unconvincingly.

By walking out of the Hanoi summit, Trump caused Kim to lose “face” and damaged Kim’s ego. It was exactly the right thing to do.

In late January Director of National Intelligence Dan Coats, flanked by the heads of the CIA and FBI, told the Senate that the intelligence community had concluded that North Korea wasn’t going to give up its nuclear weapons because its regime believed them necessary to its survival. President Trump reportedly was angry with Coats for disagreeing with his own views. But Trump’s views are badly off target.

Coats’s testimony was spot on. After the fall of Saddam Hussein, Kim’s father and predecessor, Kim Jong Il, came to believe that the only certain means to preserve his dictatorship was to develop nuclear weapons and the means of delivering them against the U.S. mainland.

North Korea tested its first nuclear weapon at its Yongbyon underground test site in 2006 and began serious testing of ICBMs the same year.

Since then, there have been five more nuclear tests at Yongbyon; the latest, in 2017, claimed to be the detonation of a hydrogen bomb. ICBM testing has fired missiles over Japan. Kim Jong Un has threatened to ring the U.S. territory of Guam with missiles.

In September 2018, the Norks said they were closing the Yongbyon site and dynamited some of the tunnels into it. Before that exercise, intelligence — ours and other nation’s — had assessed the Yongbyon site to be no longer useful for tests because the mountain under which it lies is believed to be about to collapse from previous tests.

At the summit, Kim offered to close the already-shuttered Yongbyon facility and wasn’t willing to do more. Trump walked out and thus won the summit.

So where do we go from here?

The Norks will return to their belligerent statements to make up for the loss of face Kim suffered in Hanoi. They are certainly digging under another mountain to create a new nuclear test site after their over-use of Yongbyon. And they will recommence nuclear testing soon after they have created another suitable facility.

They will also recommence missile tests. Both nuclear and missile testing will be done to bring America back to the negotiating table.

China, Russia, and Iran are helping the Kim regime survive. They won’t stop after Kim’s failure in Hanoi. Kim’s train, returning from Hanoi, will stop in Beijing for consultations with Xi Jinping where he will be reassured of China’s support and get advice on how to deal with Trump.

Both North Korea and Iran are suffering from the sanctions now in place against them. But sanctions aren’t going to cause either nation to give up its nuclear ambitions.

There will be a great many statements answering Kim’s belligerence in kind and saying that we stand with our allies, but we need to do a lot more than just talk.

Regardless of the expense, Trump needs to change his mind about the joint U.S.-South Korean military exercises. By doing so, he will continue to pressure Kim and possibly prevent South Korea from going farther in its attempt to appease the Norks. Trump should invite Moon Jae-in to Washington and announce that the exercises will resume in a joint press conference with the South Korean president.

We should also increase the pressure on China to at least greatly limit if not end its support of the Kim regime. Economic pressure, through Trump’s tariffs on Chinese exports, has damaged China’s economy. To make any trade deal effective, a U.S.-China deal should be predicated on a reduction in Chinese support for Kim.

Covert action against the Norks’ nuclear and missile capabilities — including cyber-attacks and more — should be used to damage and disrupt both.

Last, and probably most important, is an increase in the development and deployment of better missile defenses for us as well as for Japan and South Korea. We haven’t tried to shoot down North Korean missiles over Japan for fear that these defenses won’t work. We need to go all in on missile defense to ensure that any missiles that are targeted close to Japan — or South Korea or any U.S. territory — can be shot down.

Aggression must be answered by determined defense. It’s the only thing aggressors — and allies — will believe.

Correction: Last week I wrote that UK Prime Minister Theresa May hadn’t tried to negotiate with the Irish Republic and her DUP allies on a post-Brexit border. She has attempted to do so. Ineffectively, of course.