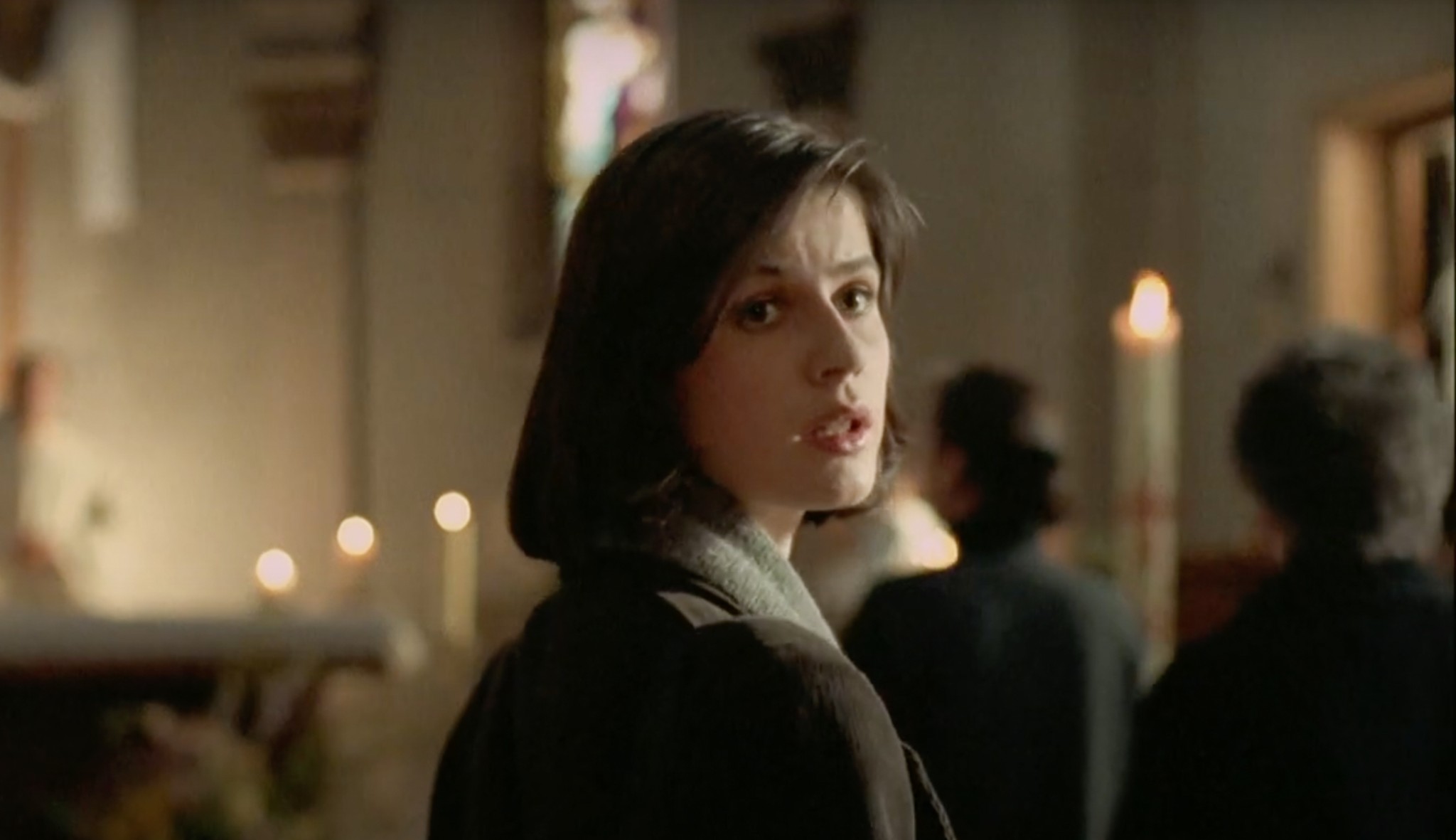 In an episode of the late, great sitcom The King of Queens, Doug Heffernan (Kevin James) and his wife, Carrie (Leah Remini), meet their friends Deacon and Kelly at a cineplex for a night at the movies only to discover that Doug and Kelly want to see some lowbrow flick called Blood Thieves 2 — condescendingly dismissed by Carrie as “a movie where a bunch of people get their blood stolen” — while Carrie and Deacon prefer to take in an apparently far more sophisticated French film entitled Bon Vivant. So the husbands wife-swap for two hours, and afterward they’re all happy with their decisions: Kelly found Blood Thieves 2 wonderfully scary, while Carrie reports that Bon Vivant was great. “What was it about?” asks Kelly. “I can’t tell you exactly,” replies Carrie, “but it was very well done.”

Well, I kind of hate to admit it, but that’s how I felt immediately after watching the Three Colors trilogy — a suite of three films that were first released in 1993 and 1994. They are now available on HBO Max, and so I’ve just seen for the very first time. Directed by Krzysztof Kieślowski (1941–96) and written by him in collaboration with Krzysztof Piesiewicz (b. 1945) — both of them Polish, if the names didn’t give you enough of a clue — the movies, entitled Blue, White, and Red, are Swiss–Polish–French co-productions and tell three different stories.

I had planned to watch Blue and leave the two other films for later in the week. I ended up viewing all three in one sitting. It was impossible not to. But why? They were powerful. And made them powerful? What, in the final analysis, were they about? To quote Carrie Heffernan, I couldn’t have told you exactly — not at first, anyway — but I knew in my gut that, as she put it, they were very well done indeed.

Of course, I can tell you a bit about the characters and plots. Blue, set in France, is about the gorgeous Julie (Juliette Binoche), who, after surviving a car crash in which her daughter and husband, the latter a famous composer, are killed, moves from their sprawling rural chateau to a small but nicely located Paris flat (at the corner of Rue Mouffetard Rue de l’Arbalète, if you must know) where she tries but fails to isolate herself from others. In White, a hapless Paris-based barber, Karol (Zbigniew Zamachowski), is jilted by his gorgeous wife, Dominique (Julie Delpy), who leaves him so broke that he has to return to his homeland of Poland in a steamer trunk — a series of humiliations that fire up in him an ambition that brings him extraordinary business success. And in Red, set in Geneva, the gorgeous Valentine (Irène Jacob), a university student and part-time model, hits a dog with her car and becomes acquainted with its owner, Joseph Kern (Jean-Louis Trintignant), a retired judge who, she discovers, has been secretly listening in on his neighbors’ phone calls.

So much for the stories — or, at least, the elevator pitches. But what does it all mean? What, for one thing, makes these movies a trilogy? Their Wikipedia entries explain that they’re named for the colors of the French flag and that each is meant to thematically address one of the three ideals in the motto of the French Republic: liberty, equality, and fraternity. In Blue, Julie’s tragic loss affords her a kind of liberty; Karol, upon returning home in White, strives to achieve equality with his ex-wife; in Red, there develops between Valentine and Joseph something that can fairly be described as fraternity.

I have to admit I’d never have figured that one out on my own — and that, in any event, this explanation doesn’t really resonate for me. No, what I find powerful about these movies, and what seems to me to bind them together into a trilogy, is their shared — and profoundly human — vision of a world awash in connections and coincidences that feel well-nigh magical; a world, indeed, in which every emotion, action, and moment of human (or animal) contact is pregnant with a deep and mysterious meaning and appears to be driven by a powerful and impenetrable fate.

When, at the beginning of White, Karol is in a Paris courtroom for his divorce proceedings, we glimpse Julie poking her head through the door and being stopped by a guard, and we realize that it’s the scene from Blue (only viewed from another angle) in which she goes to the courthouse to seek out her late husband’s mistress, a young lawyer who turns out to be expecting his child; this brief moment in which one movie, one life, brushes up against another is strangely affecting.

Such moments abound in this trilogy. When, in Red, a neighbor throws a rock through one of Joseph’s windows, it recalls the scene, early in Blue, when Julie, confined to a hospital after the car crash, breaks a window to distract a nurse. Such recurrences give one a curious sense that lives echo one another, that nothing happens by accident, that every single thing that happens to us is a tiny piece in a giant jigsaw puzzle of which we’re vouchsafed only the smallest glimpses, as through a glass, darkly.

After that rock comes through the window, Joseph tells Valentine to put it on his piano; and this brings to mind the Steinway at which Julie — who, it turns out, was the true creator of, or at least collaborator on, her husband’s musical compositions — completes his half-finished orchestral piece. By the way, that piece, we’re told at one point in Blue, was commissioned by the EU so that it could be played simultaneously by orchestras in several of the continent’s capitals in a celebration of European unity. (These movies, one is reminded, came out not long after the Iron Curtain collapsed.) This ambitious scheme comes off as an allusion to what Kieślowski is doing in this trilogy — hinting, again and again, that although each of us may feel at times that we’re wandering alone down our own lonely path and whistling our own little tune, we’re really more like musicians playing parts in some incomprehensibly grand symphony.

His camera moves with singular assurance, noticing inconspicuous but vital (and often heartbreaking) particulars as if it were the eye of the deity.

What a magnificent director Kieślowski is! He’s a master of tension and suspense, a genius at capturing atmosphere and emotion. His camera moves with singular assurance, noticing inconspicuous but vital (and often heartbreaking) particulars as if it were the eye of the deity. Although they’re anything but sentimental, these films are ultimately deeply moving, underscoring the importance of human connection and, yes, of love. It’s not for nothing that the musical work that Julie completes after her husband’s death includes a choral section in which the words consist of the passage from St. Paul’s first letter to the Corinthians that begins “If I speak in the tongues of men and of angels, but have not love, I am only a resounding gong or a clanging cymbal” and that ends “And now these three remain: faith, hope, and love. But the greatest of these is love.”

Although all three of these movies have been celebrated as masterpieces, Red is widely — if not universally — considered the best. As it happens, it’s one of only two movies (the other is Fanny and Alexander) to have scores of 100 percent at both major review-aggregating sites, Rotten Tomatoes and Metacritic. It’s also the only movie in Kieślowski’s trilogy to have been nominated for Oscars — three of them, for directing, original screenplay, and cinematography. (Submitted by the Swiss as their entry for the foreign-language film prize, it was later declared ineligible on the grounds that it received more funding from France than from Switzerland.)

Yet despite all the accolades, the script of Red would never have been green-lighted by any Hollywood producer. Ditto Blue. Both of these films, low on action and big on long, silent close-ups, break every rule in the American screenwriting books. White is somewhat different: although as richly human and tender as the other films, it’s less artsy, it’s genuinely funny, and it moves fast; you could imagine it possibly getting remade in Tinseltown if somebody like Judd Apatow did a rewrite that made it broader, more superficial, and more obvious. But I wouldn’t want that, and I suspect that, after you see White, you won’t want it either.

Why Isn’t Netflix’s Memory As Good As the European Original?

Operation Finale: A Terrific Film on the Capture of Eichmann