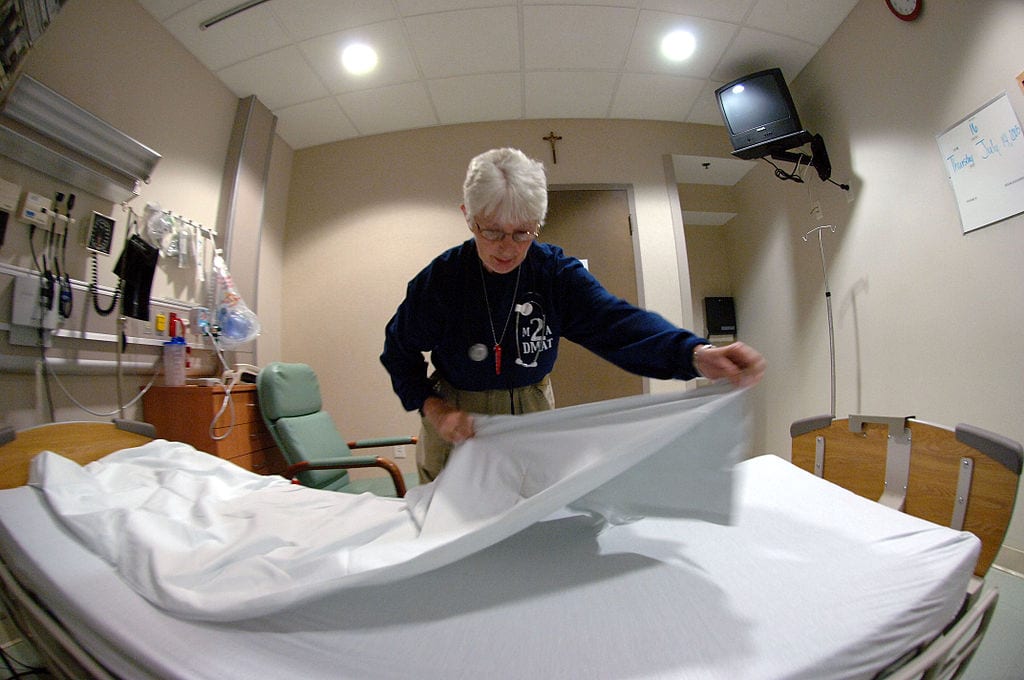 Danger lurks for hospital patients in a place they’d least expect it — the bed. Hospitals claim to disinfect beds in between patients. Don’t believe it. Data from four New York hospitals prove beds are full of germs. Patients are nearly six times as likely to come down with Staph, Strep, or another dangerous infection if the patient who used the bed before them had it.

Columbia University researchers found being in a bed previously used by a patient with an infection ups your own risk of infection by 583%, according to the current issue of Infection Control and Hospital Epidemiology. The researchers conclude that “enhanced cleaning measures” are needed.

No kidding. Adequate cleaning is more vital now than ever, because germs are getting deadlier. On April 3, the Centers for Disease Control and Prevention announced that “nightmare bacteria” — causing infections that cannot be cured with most antibiotics — are spreading throughout U.S. hospitals. Fifty percent of patients who get these infections die.

Dr. Anne Schuchat, Principal Deputy Director of the CDC, said she was shocked by the extent of the spread. “These genes are lurking in American patients and they are spreading in hospitals,” warns Dr. Amesh Adalja, of Johns Hopkins University. The CDC is urging more “aggressive” infection control measures.

They should start by cleaning mattresses better and inspecting for leaks in mattress covers. Recently, the Food and Drug Administration warned hospitals for the second time about the toxic brew that can build up inside a mattress. Covers should be routinely removed, so the contents can be inspected. “If blood or body fluids from one patient penetrate and get absorbed in a mattress, the fluids can leak out the next time the mattress is used,” harming the next patient.

Research in the American Journal of Infection Control shows that half of hospital mattresses have drug-resistant bacteria on them. They’re literally hotbeds of germs.

Your hospital bed has an enormous impact on how well you survive your stay. “Patients are exposed to the mattress, they’re lying on it for hours,” says Xavier University health professor Edmond Hooker.

And it’s the history of who was in the bed that matters most. If the patient occupying the bed before you was given antibiotics, your risk of getting C. diff, the most prevalent hospital infection, goes up by 22%. That’s a serious threat. At least 29,000 patients are killed by C. diff each year.

How does it happen? Antibiotics cause patients who have C. diff germs in their gastrointestinal tract to shed those germs on the mattress, bedframe, bedside table, and other nearby surfaces. These germs lie in wait to sicken the next patient placed in the bed. Kevin Brown, at the University of Toronto School of Public Health, explains that about half of hospital patients take antibiotics. That’s a huge number of beds potentially contaminated with C. diff.

Hospitals ignore the risk because they’re rushed to turn over rooms, Hooker explains. The hospital “has patients coming out of the operating room, patients in the emergency room.”

The remedy, say Columbia researchers, is for hospitals to adopt high-tech cleaning methods that disinfect an entire room, including the bed, in a few minutes.

That would also protect patients from another big risk researchers identified — having a hospital roommate who is infected or unknowingly carrying an organism such as Strep, Staph, Enterococci, or Pseudomonas. That situation quadruples your risk of becoming infected yourself. Doctors and nurses pick up bacteria off one patient’s bed and surroundings, then carry the germs on their hands, gloves, and lab coats to the next patient’s bed.

According to the CDC, drug-resistant bacteria are spreading through hospitals “like a wildfire.” The Columbia investigators made it clear what has to be done. More thorough cleaning. “Current standards for cleaning and disinfection” are insufficient, raising the risk of infection 5 to 6 fold. Hospitals had better pay attention.