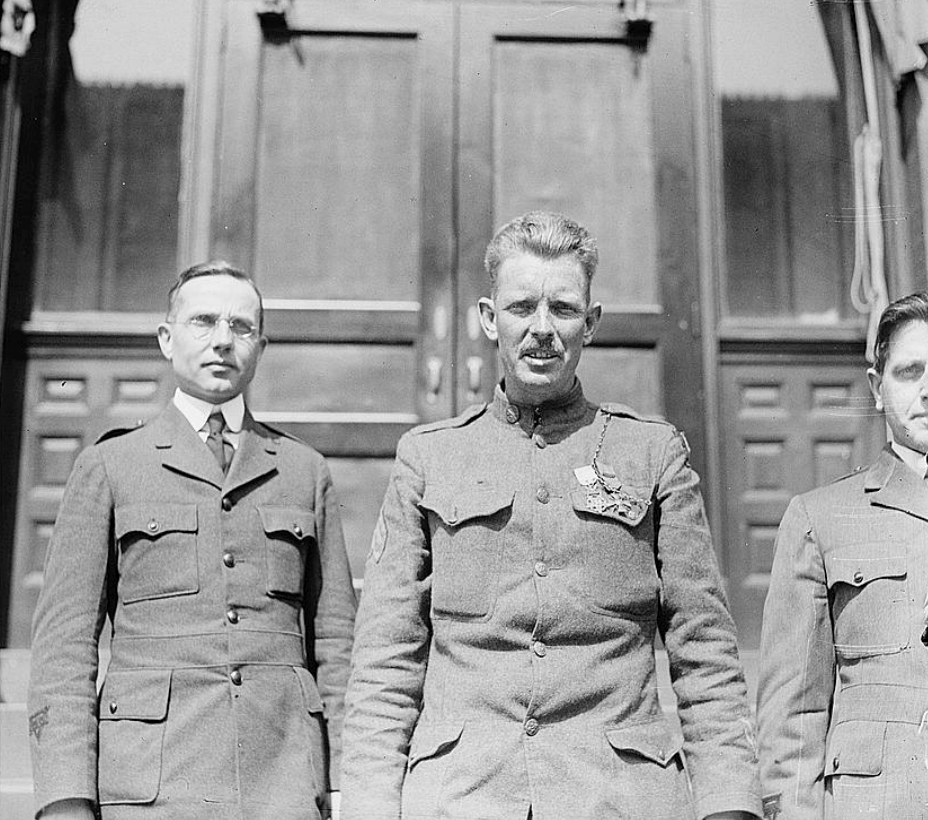 The York Patrol: The Real Story of Alvin York and the Unsung Heroes Who Made Him World War I’s Most Famous Soldier

America has always been blessed with brave men, and now women, who have answered the call in time of war. Who have put it all on the line to do their duty when they were needed. Most didn’t, but some distinguished themselves by bravery and achievement on the battlefield in a way that influenced momentous events in favor of the good guys. Such a man was acting corporal — soon to be sergeant — Alvin York of Pall Mall, Tennessee.

In The York Patrol, journalist and military historian James Carl Nelson tells York’s story, from his obscure beginnings in 1887 in a poor area of rural northeastern Tennessee to his death in 1964 in Nashville, a genuine national legend. Though poorly educated, with just five years of formal schooling in academic years that lasted less than three months each, York was an intelligent and principled man who in his post-war life never ceased to try to improve his native Wolf River area. In doing this, his very legitimate fame was both a boon and a burden. His entire life was eventful, admirable, but never easy.

Nelson tells it all, and along the way gives us a snapshot of the state of American journalism and the fame machine early in the last century, and of the challenges of finding truth in the fog of war. His rendering is more complete and more reliable than the 1941 movie — Sergeant York — that fetched Gary Cooper an Academy Award for best actor. The movie gets the bones of the events right, but, as with most Hollywood renderings of historical events, plays fast and loose with many of the facts, and includes many of the combat movie clichés that must make real combat veterans cringe.

On Oct. 8, 1918, during the pivotal Meuse–Argonne offensive, the largest battle American soldiers and Marines have ever participated in, York, with 16 other soldiers on the patrol with him, disrupted a 160-man German machine gun battalion, which had allied troops pinned down, their offensive stalled. Through a remarkable series of events that Nelson relates in his well-researched book, York and the soldiers with him silenced the machine guns. York alone was credited with killing 25 German soldiers and capturing 132 others that day, with several of his mates adding to the killed and captured totals. Sadly, six of the soldiers who set out on the patrol with York were killed.

These events would have been remarkable and worthy of praise at any time and place during any war. But the consequences of Allied success at Meuse–Argonne, made possible by the dramatics and outsized success of the York patrol, brought what used to be called the Great War to a close just a month and change later. Though many in Germany, including a certain megalomaniacal German corporal, would later deny it, the Kaiser’s army by Nov. 11, 1918, was, as York would likely have phrased it, “whupped.”

For his remarkable actions that day York was awarded the Medal of Honor, the highest military honor the U.S. military bestows. Others on the mission received lesser decorations. York was also awarded the French Croix de Guerre by allied supreme commander Marshal Ferdinand Foch, who called York’s actions “the greatest achievement accomplished by a common soldier in all the armies of Europe.”

All this might have been little noted and not long remembered after the award ceremonies were over and the troops made it back home. Most soldiers and civilians alike just wanted to forget the war and go back to their real lives. But this wasn’t to be for York. The quirky but quotable Andy Warhol famously said the duration of fame is 15 minutes. Rather than be famous for 15 minutes, York was famous for life for something that took barely more than 15 minutes. His exploits became known across America thanks to a detailed article about them in the Saturday Evening Post in April 1919. The Post still exists, published six times a year to a much-reduced circulation. But in 1919 it was a giant, with a circulation of more than two million in an America with a population of fewer than 105 million. Whether he wanted to be or not, and he mostly didn’t want to be, York was big. America was not going to let him return to the obscurity from which he came. To make it back to his beloved Tennessee he had to endure a ticker-tape parade in New York City, a standing ovation from Congress at the U.S. Capitol, and other celebrations he found baffling.

The Alvin York who went to war in 1918 was very much a work in progress. As a young man he went through an admitted “wild phase” where he smoked, drank heavily, and celebrated the joys of the flesh. But before Old Scratch had his way entirely with Alvin York, he found Jesus through the help of a local evangelist. He gave up smoking, drinking, and carousing. By the time he was “in the army now” he was the fundamental Christian he would remain for the rest of his life.

As for the makings of a soldier, York was already a rifle marksman before he was called up, having become one in the local woods helping put food on the York dinner table. On the other hand, the relatively new Christian took seriously all the strictures of his faith, including the one that said, “Thou shalt not kill.” He said he was willing to give his life for his country, but not to take the lives of others. This is a distinct handicap for an infantryman. But York and his basic training company commander worked this through, and York came to accept that God allowed killing under limited circumstances. He certainly had no hesitations on the day in question.

Back home after the war, York was now a more worldly man, though far from cosmopolitan. He recognized that the people in his home patch would benefit from good roads, better schools, libraries, and more up-to-date farming methods. Two projects he devoted most of the remainder of his life to were an agricultural institute and a bible college for his area. These are the only things he would take any money for based on his notoriety. This included money from a percentage of the gross from the Cooper movie. He repeatedly said, “This uniform is not for sale.” This principled stand was admirable, but as a result of it he was in and out of money trouble for much of his life.

Another problem that dogged York for decades after the war was other members of the patrol who resented York for, as they put it, “hogging all of the glory.” Which he hadn’t done, as he’d not asked the Saturday Evening Post to write about him. Whether or not the claims of some of the soldiers that their actions that day were not properly celebrated are sound can never be fully resolved. (See above re: “fog of war.”) But one thing that cannot be questioned is that Alvin York was a bona fide hero, whose memory is fading fast in this era when heroes are thin on the ground. Nelson’s book is a good reminder.