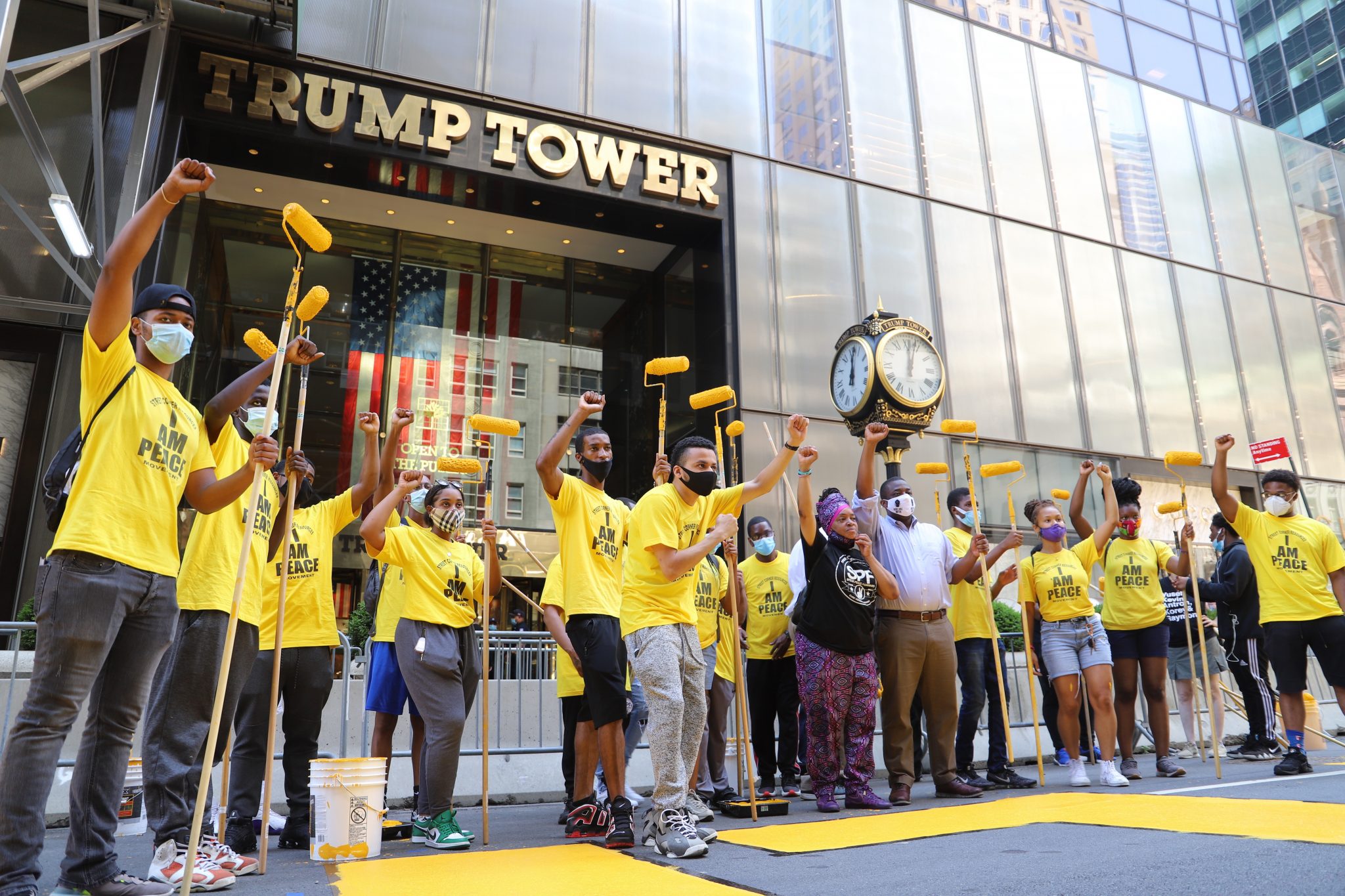 Epigraph of the Series

“ … the right of the people peaceably to assemble and petition their Government for redress of grievances.” U.S. Constitution, Amendment 1
Taxonomy for the Series
“If you … then you are a … ”
peaceably assemble/petition … protester
attack/threaten innocent people … thug
torch buildings/toss hard objects … rioter
break into stores/steal merchandise … looter
organize/direct violent acts … domestic terrorist
desecrate monuments/statues … vandal
topple/demolish/sink statues … member of a mob

This is the first of three articles on recent turns in the convulsions that have wracked the country since May 25, upon the unlawful killing of a criminal suspect resisting arrest. This article focuses on the consequences of allowing mobs to carve out autonomous zones, and of caving in to radicals demanding defunding of police. The second article, “Orwell’s Children: Ministries of Historical Untruth,” will focus on how restraints on speech have morphed into totalitarian assaults on our history. The third article, “Married to the Maoist Mob: Revolution by Riot,” will focus on how mobs are transforming what originally were group riots into a revolution, aimed at toppling not merely statues and monuments, but the lawfully elected government of the United States.

My title draws from the original Anarchist Cookbook — a 1971 counterculture manual published to aid terrorists using violent forms of opposition to the Vietnam war; in addition to instructions on explosives, the manual offered a guide to making LSD, and how to toss a Molotov Cocktail. What we see on our screens today is a 21st-century version of anarchic action. Much of it, per the epigraph, is activity that has neither constitutional nor legal protection. Its protectors are feckless left-wing governors and mayors — almost exclusively Democrats; they are allied with the cultural powers in nearly all universities, plus nearly all the power players in the entertainment, advertising, and media industries. Their combined power is amplified by the near-complete surrender of major corporations to extortionate pressures from the movement.

Recent events in five cities collectively illustrate the rapidly deteriorating urban scene. In all, to date 140 cities have seen riots during one and a half months of rage, with 21 states calling out their National Guard.

New York. Defunding the police is all the rage among New York City lefties. NYPD cops had to retreat at City Hall, in the face of an advancing mob that had occupied space nearby, after the city council voted to cut $1 billion from the NYPD’s $6 billion budget. Last month saw NYC’s worst shooting June in 24 years. From June 1 to June 28, shootings were up nearly 160 percent from 2019, and were the most in June since 1996. In historical perspective, the Big Apple’s murder total peaked at 2,245 in 1990; by the first year of Rudy Giuliani’s second term, murders had fallen to 633, a level last reached in 1965. In 2001, Giuliani’s last year, there were 649; after three Michael Bloomberg terms, the 2013 tally was 335. NYPD now reports that retirement applications have skyrocketed, since the May 25 killing of George Floyd, up 75 percent over last year’s number for the same period; the backlog is so large that NYPD is a month behind in processing them.

One surprise: NYPD’s figures show that bail reform releases — more than half the 8,000 inmates at Rikers Island released in early 2019 — resulted in one shooting; no report was given as to other crimes. Ironically, Democrat Gov. Andrew Cuomo echoed NYPD’s “crime spike” link to bail reform.

Chicago. The Second City’s crime wave upsurge was kicked off with Father’s Day weekend, when 104 people were shot, with 15 killed, including five children — one a 3-year-old toddler. Many were killed by being caught in gangbanger “spray and pray” crossfire. Then over the July 4 weekend came more Chicago slaughter, with 89 shot, 17 killed — including a 7-year-old girl playing on her lawn. The mid-20th-century city joyously celebrated in song by the likes of Judy Garland (“Chicago”) and Frank Sinatra (“My Kind of Town”) is long gone.

Seattle. Seattle’s Capitol Hill residents have increasingly hired private security. No wonder: here is 41 seconds of the June 21 mob Paradise Northwest Lost that at long last — 10 days later! — woke up Seattle’s dippy mayor. The Seattle mayor ordered the 4:58 a.m. take-back of CHOP by local police and FBI, stating that the mob had “gather[ed] in this area an unlawful assembly requiring immediate action from city agencies, including the Police Department.” Yet the Seattle mayor wants a radical council member, who had colluded with the mob in the CHAZ/CHOP “autonomous zone,” expelled from the council for picketing the mayor’s home! The June 2020 figures show for Seattle a 525 percent spike in crime over June 2019. This week a majority of the city council voted to cut the SPD budget 50 percent; the SCC also banned the use by SPD of chokeholds and tear gas. Earlier in the week the SCC voted to ban the use of crowd control weapons: “kinetic impact projectiles, chemical irritants, acoustic weapons, directed energy weapons, water cannons, disorientation devices, ultrasonic cannons or any other device.”

President Trump told Sean Hannity this week that the Seattle mayor and governor moved to end the standoff only because the president told them that if they did not act soon, he would send the feds in to clear the area.

Minneapolis. New charges were filed against the four city cops who arrested George Floyd on May 25; in addition to the senior officer, whose submission hold led to Floyd’s death, two cops held down the victim’s legs as he was being handcuffed. One of them checked the suspect’s pulse, a full three minutes before force was ended, and found no pulse at all. The fourth officer charged is black, and had been on the job only three days; ironically, he had joined the force to help improve police racial attitudes. (Of 900 city police, 80 are black. And the chief is black, on the job three years.)

The Minneapolis city council voted 12-0 to disband — not simply defund — the city’s police force. Yet three city council members have hired private security — despite zero police record of threats against them — at $4,500/day, with public funds, naturally. An undercover investigation shows (22:28) that the Minneapolis riot came after the kind of trigger event for which plans had been laid by an activist Green group called the Sunrise Movement.

Atlanta. Here are the full charges filed against Atlanta cops. The July 4 weekend saw a 31-shootings, five-killed crime spree, featuring an exceptionally evil act: A mom driving her two kids home on Saturday, the 4th, tried to drive around an illegal barricade erected by a mob illegally occupying territory near the Wendy’s where the recent nationally covered police shooting took place. Shots were fired into her car, killing her 8-year-old daughter.

The reality is this: These aren’t police officers shooting people on the streets of Atlanta, these are members of the community shooting each other.

Other Cities. In contrast to the surrender of law enforcement in the above cities, the Oklahoma County D.A. charged rioters with domestic terrorism. As he tartly put it, “This is not Seattle.” Ben Stein recounted how his home grounds were invaded by BLM while he was out of town, and his wife and housekeeper had to draw .38 pistols. The L.A. school police chief resigned in protest over a 35 percent budget cut. LAPD reported that in the first week of June, homicides were up 250 percent and shootings 56 percent versus the last week of May. And in Salt Lake City vandals went on a rampage after the local D.A. cleared cops in the killing of a fleeing suspect armed with a gun. The suspect was shot 34 times after repeatedly refusing to obey orders to drop his weapon. The cops said they feared he’d turn around and shoot them.

Media: Sanitizing Urban Unrest. Veteran Washington Post reporter Philip Bump presented a misleading list of America’s 20 least safe large cities, to limit the total run by Democrats. Bump’s tally showed 17 of the 20 highest violent-crime cities run by Democrats, one by a Republican, and two independent. The Republican city, Jacksonville, would not rank in the top 30 if per capita figures were used. Put simply, Bump used gross figures rather than per capita, to reach this ranking. Also, and he characterized as “independent” left-wing mayors who ran as nonpartisan in two reliably blue cities: San Antonio and Las Vegas. Bump then ran the per capita numbers, and the tally was 19 run by Democrats, and one by a “nonpartisan” mayor, Springfield, Missouri, which also leans Democrat. Running murder rates per capita shows 28 of the top 30 run by Democrats, and the other two run by a nonpartisan; but again, the city leans Democrat.

Added Factors. A 2015 Newsweek article on the emerging racial makeup of America’s police departments reported that the new arrivals did not change community attitudes towards police. (Here is a website with searchable PD race/ethnicity data.) Black community attitudes towards police were mixed: most want police presence, but want reform too. Wall Street Journal columnist Walter Russell Mead notes that populists prefer self-governance to even good governance by elites.

Bottom Line. By ordering police to stand down during riots and making clear that police must pull back from forceful policing in crime-ridden areas, feckless political leaders and their cheerleaders in key cultural centers of society have given mobs a green light to push through a radical recasting of how America polices its cities. The rest of us await a populist backlash that can force authorities to confront the radicals and thus bring peace to our major cities. The auguries appear to be for more riots — perhaps many more — before sanity sets in and police can, if reformed somewhat, restore a reasonably stable civil order.

But such requires a rebuilding of trust. Once lost, trust is very hard to restore. It will take years, at minimum. But there is no law that says this will happen. It is quite possible that such a renewal does not come to pass. And then, we will be in for dark, dangerous times lasting many years.