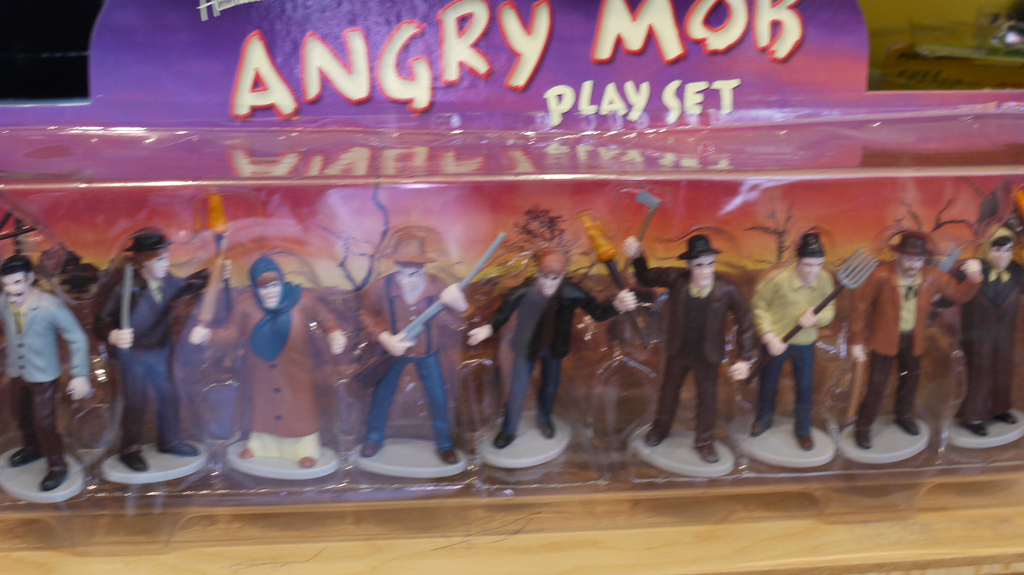 Democrats are big on the idea of demographics. One’s identity, as defined by their demographic markers, is a key point of politics, intersectionality, justice, and total world-view if one is a Democrat. And a big part of that is the representation of one’s demographic identity in all things, be it government, television and movies, or the workplace. So it is no surprise, really, that Democrats think the Senate should be proportional to the population.

Except in the case of the Senate, they are really only looking at one particular marker: party.

Although lip service is paid to the idea of the Senate representing, in exact proportion, the various strata of society, in practice progressives of late aren’t that concerned with, say, race or creed or religion or gender. Instead it’s about the letter after the name. (D) or (R). Thus the useless concept of the Senate popular vote has gripped the Attention Deficit crowd’s imagination.

If that sounds like a deliberate dumbing-down of the concept to make it seem worse, it isn’t. That is the actual argument.

Failing that numerically pristine representation, simply ditch the Senate, they say. Apparently the “don’t criticize the FBI because it’s bad to undermine American institutions” phase of national Democrat politics has passed into the “burn it down” phase– a phase that was not only mocked but cause for great alarm and consternation when first voiced by Trump voters a couple dozen months ago.

There won’t be free and fair elections in the United States until the Senate is abolished.

That’s Ian Milhiser who is “Justice” Editor for ThinkProgress, with the hottest take this side of “Harvard has discovered aliens.” It is, of course, a fallacious and wrong take. Even if one believed that the system of two Senators per state is flawed or unfair, it still wouldn’t undermine ‘free and fair elections” in the country at large. It’s patently and facially absurd. What makes elections free and fair is the freedom for every citizen to vote, universal suffrage, the integrity of the voting process, and the equality of access. A House election does not cease to be a “free” election because a liberal writer doesn’t like how our Democratic Republic is designed to apportion representation.

More than that, though, it is a convenient and late complaint in a country that holds elections for House and Senate every two years. where was this complaint a few years ago when, well…

Beyond the sophistry in Milhiser’s tweet is the broader sentiment, which has utterly taken hold on the left. Here is ABC’s Matthew Dowd, representing it as a valid critique on Wednesday’s The View.

Arguably the person who started the cascade was Vox’s Ezra Klein.

I don’t think people are ready for the crisis that will follow if Democrats win the House popular vote but not the majority.

After Kavanaugh, Trump, Garland, Citizens United, Bush v. Gore, etc, the party is on the edge of losing faith in the system (and reasonably so).

Klein is talking about a House “popular vote,” which is also not a thing, but is by a very thin shred slightly less of not a thing than the supposed Senate popular vote.

Although one can tally the total number of votes cast, and for which party they were cast, there is no such thing as a national Senate popular vote. And this is not a trivial point or simple word-play; it is not that this doesn’t “officially” exist, or merely isn’t codified. Rather, it literally does not exist.

Voters cast their ballot for particular politicians in our elections, individual candidates. Even if we conducted an insane nationwide vote for all one-hundred seats, it would still be a vote for individual senators under our American vision of representative government.

It is a foundational principle of the American political ideal that you choose a human being who will represent you, your ideas, your goals, your preferences, within a body made up of other representatives of other people’s ideas, goals, and so on. What Klein and Milhiser are arguing, instead, is simply party rule in toto.

Under their premise, you are represented by the party, not the persons in the party. It becomes immaterial whether it’s Beto O’Rourke, Alexandria Ocasio-Cortez, or even Barack Obama. A moot point. The aggregate is for Democrats and therefore Democrats should rule. That’s their idea.

If one grants that we vote for individual persons, then one must abandon reason and mathematics in order to insist that a national popular vote exists.

So it does not exist and, by our guiding principles, should not.

They don’t actually want that. Those who complain don’t actually want you to vote for each Senator regardless of state. They think you’re uninformed and easily misled — that’s one of the primary facets of Russian interference in elections. Imagine how much harder it would be to make informed decisions about 100 candidates than just two or three.

In fact, the most basic principle of representative government is that the representative acts on your behalf so you don’t have to know about every little thing. These complaining Democrats don’t want you to do that either. They want party rule.

They are embracing mandate politics. ‘Democrats just plain wanted it more and therefore should be in control. A mandate from the people.

Mandate politics is not only ephemeral and moody, it’s unwieldy and impractical. Ask the countries who’ve tried it.

Still, leaving the principle aside, they are also wrong on the actual data. The popular vote groaners don’t even have the numbers right, or simply don’t want you to know them for their own partisan reasons.

Take, for example, California. On Tuesday, a huge number of votes were cast for Democrats in the Senate. Far more so in the state than were cast for Republicans. Of course, there were no Republicans running…

It’s that Democrats rigged California to produce 6.1 million votes for Dems, and 0 for Republicans.

So, 3,363,071 votes were counted for Democratic Sen. Dianne Feinstein at last report, and in that same race, for her opponent Kevin de León, another 2,824,889 were cast. That’s 6,187,960 for Democrats. As Neil Stevens points out, in that state there were zero cast for Republicans, as none were running. In contrast, Florida’s very tight race for Senate saw, at last count, 4,080,777 votes cast for Republican Rick Scott, and 4,046,079 for Democrat Bill Nelson. Of the four candidates, only two won, but 10,234,039 of the votes were for three Democrat candidates.

Obviously, that skews the numbers for the so-called Senate popular vote, and that’s not even the whole problem. There’s also the nagging fact that Democrats won more Senate races overall than the Republicans did.

Yes. The Democrats won MORE Senate races on Tuesday than Republicans. Do you see? The “popular vote” angst about the Senate isn’t even that Democrats didn’t win more races despite having more votes, because they did win more races.

If you don’t believe it, check the numbers. Of 33 Senate seats decided on Tuesday, 20 were won by Democrats. Only 10 were won by Republicans. One, in Arizona, remains too close to call, and two were won by Independents.

To join the pitchfork crowd, you have to ignore the fact that in that CA race both candidates were Democrats, and you have to ignore all incumbent wins. The Milhisers and Kleins are actually flipping out about the overall composition of the Senate. Which means, by the way, also ignoring the other 66 Senate seats that were NOT up for a vote on Tuesday.

It’s a phantom concern on top of a phantom premise, wrapped in a philosophical view that is contrary to the founding philosophical principles of governance upon which our Republic rests.

The question of whether States should be equally represented as political actors, with two senators apiece, regardless of population, is not beyond the realm of reasonable debate. People can fairly be concerned that the senate, which has outsize power enhanced by the outsize power of the Supreme Court, to which seats Senators hold the keys, does not represent the nation as a whole if it over-represents smaller population areas. We can argue that. I’ll tell you about the “tyranny of the majority” concept someone forgot to bring up in your elementary school, and you’ll tell me about the needs of the many and the few. It’s fair to debate.

What is beyond the pale is taking the simultaneously abstract and practical question, wrestled with by the Founders, of how to balance the concept of self-governance against the dangers of the mob, and turning it into an of-the-moment political ploy and talking point for the sole and express purpose of undermining a political party that one is simply not aligned with.

We have a system of checks and balances, based on a set of principles, and in that system we do not have a nationwide popular vote for the 100 seats in the Senate. We do not do straight party rule. We do not have a simple popularity vote for each action the nation undertakes. It’s a system designed and implemented at great cost by great minds after a revolution based on the idea of representation. It shouldn’t be tossed aside haphazardly by frustrated liberals who are consumed by their failure to “fundamentally transform” America which is, deep down, the actual issue here.

The goals of imposing an even more powerful central state, of curtailing capitalism and expanding “democratic socialism”, of enforcing the social mores of insular and population bubbles in urban areas on the diffuse rural population, are genuine objectives of the leftists lamenting the popular vote today. That’s not my theory or a talking point, these are the very premises of the progressive movement, written on their web pages and delivered as speeches at their gatherings, from mic checks to women’s marches to the halls of Netroots.

In the broad strokes, the increasingly strident complaints about national popular vote with regard to fundamentally local elections is about all of those philosophical and societal principles. But in the small strokes, it’s just factually wrong.

Democrats won more Senate races Tuesday. The total number of votes for Democrats includes a huge number cast for two different Democrats who were opposing one another, one of whom obviously lost. Not all the Senate seats were up for a vote on Tuesday, therefore the overall composition of the Senate was not subject to that election. These are facts, and they are facts that make the current and latest “this government doesn’t represent us” fear-mongering pose utterly fraudulent.